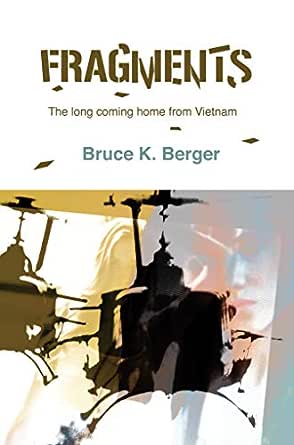 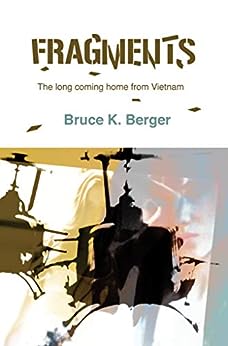 "Fires in some men, like fires deep in forest roots, can burn for decades. Fragments paints such a fire in the metaphor of a journey for those who flew home but not home after a long, bloody, bitter war in Vietnam that often did not end with a warrior's return to American soil. Berger's pieces are like fragmentary grenades and flashbangs, images and lines that catch in your throat, stop your breath, blind you with tears. Like the image of a gravedigger back home whose 'heart leaks into the grave' he digs for his brother ... Or the poem '66 Miles, ' the distance you get when you place 58,220 dead head-to-toe, head-to-toe, 'the length of a trip from Nogales to Tucson, or Trenton to the Big Apple.' Think about that ... and then they came home to no parades, only pockets of seething scorn. Years later they hear the meaningless koan, 'Thank you for your service.' Welcome home, my friend, welcome home." **--Joseph Heywood, **author of more than 20 books and perhaps best known for the Woods Cop Mystery Series. He served five years in the Air Force as a navigator, spending 15 months in the Vietnam theater.

"Fragments is a compilation of some of the most powerful poems you will ever read. Bruce is a gifted philosopher, thinker, writer and researcher, but Fragments takes all his talents to another level. These heartbreaking and poignant poems tell the story of what it was like to be a soldier in Vietnam. They need to be read." --William C. Heyman, CEO, Heyman Associates in New York. Longtime friend, colleague and Yankees fan. "This is an important book. In a collection of poems he calls 'fragments, ' Bruce K. Berger gives us an incisively moving--often heartbreaking--record of the Vietnam war, which left permanent scars on the minds and bodies of those who served and suffered there, then endured what Berger calls 'the long coming home.' The poems are vivid, unsentimental, sharply evocative of the places and the people--combatants and noncombatants on both sides, victims of the war's horrors both in country and back home. This is an important book. You need to read it. Insistent, unforgettable, its poems will frag your heart." --Arnold Johnston, author of Where We're Going, Where We've Been and The Witching Voice: A Novel from the Life of Robert Burns.

"This is war as never seen before; raw feelings of senseless loss as never recorded before; a glimpse into the heart of a compassionate soldier, amidst the brutality of Vietnam, as never expressed before. Emotion jumps from its pages and sticks. A mosaic of war's stark realities, then and now, stays with you long after the words sink in. You may put the book down, but you cannot escape its message. Regardless of who you are, this book will move you. For the veteran, expect a return to the killing fields in snatches of memories and rumblings of long-suppressed fear, anger, guilt and loss. For families of those lost during the war comes an understanding your grief does not go unnoticed and your eternal emptiness is understood and respected. And, for the uninitiated, who think of war in terms of a brief sound bite on the evening news--this is a hard life lesson: A single gunshot in a nameless piece of jungle can claim a life in a second and change countless other lives, half-way around the world, forever. Lastly, this is a courageous, deeply personal, discussion of inner battles many of us face. To many veterans, living with the war for decades after returning is so hard and so easily misunderstood. This book takes a giant step towards that understanding and awareness. All veterans will be better because of it." --Rick St. John, author of the acclaimed Circle of Helmets and Tiger Bravo's War, and a retired U.S. Army Colonel who led a company of 101st Airborne Division paratroopers in heavy fighting in Vietnam. --This text refers to the paperback edition.

4.8 out of 5 stars
4.8 out of 5
7 customer ratings
How does Amazon calculate star ratings?
Amazon calculates a product’s star ratings based on a machine learned model instead of a raw data average. The model takes into account factors including the age of a rating, whether the ratings are from verified purchasers, and factors that establish reviewer trustworthiness.

Sheila Fuchs
5.0 out of 5 stars Fragments is a must tread: Remembering hurts. Reflections Heal
Reviewed in the United States on May 21, 2020
Verified Purchase
Bruce Berger delivers a magnum opus of powerful prose that shreds the soul and pierces the heart. While I served at the end of the war as a Navy medic (72-75) assigned to a Marine Corps battalion, I never received orders to Okinawa (a first transfer point to Nam for medics). I was fortunate.

Berger’s verses truly weave amazing profiles in courage and fear, a medley of hope and senselessness, and the discordance between gentleness and brutality. The narratives of arriving to war in a jungle a world away to coming home to live the war from within are both shattering and stirring. The vocabulary stings and lifts.

As I read the book (sometimes only a few pages a night because of the heavy heartache they left me with) I remembered my Gunnery Sergeant at Field Med School Camp Pendleton teaching me how to clean an M-16, how to keep my feet dry in my combat boots and how to apply tourniquets while hugging the earth while under attack. This book reminds me to be thankful that, through the Grace of God, I never had to do so.

Reading Bruce’s tome reminds us that remembering hurts. It also proves that reflections can heal.

Adding further to the elegance of this book are the illustrations shared by the Providence Art Club in Rhode Island under the keen eye of Nickerson Miles. The art – to its credit – both disturbs and comforts, a great companion to Berger’s narrative.

Fragments is an amazing read and I strongly recommend it to friends, colleagues, and family.

Berger is a true poet patriot.

P.S. All profits from the sale of Fragments are donated to the Vietnam Veterans of America.
Read more
Helpful
Comment Report abuse

Douglas Gillert
5.0 out of 5 stars Poignant and thought-provoking. Emotionally healing.
Reviewed in the United States on August 5, 2020
Verified Purchase
Poignant and memory-nudging. An indispensable addition to my small collection of books on war and in particular, my war.
Read more
Helpful
Comment Report abuse

A book reader
5.0 out of 5 stars Haunting insight into the Vietnam war and its aftermath
Reviewed in the United States on May 12, 2020
I am from the generation born during and immediately after Vietnam, so it is hard to process what that conflict meant. But this book of short poems, beautifully written, provides some insight from a veteran who was there, and who has spent nearly five decades processing what he saw during his tour of duty. This is a book I will come back to.
Read more