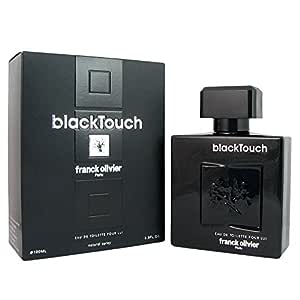 Brand: Frank Olivier
4.0 out of 5 stars 152 ratings
Amazon's Choice recommends highly rated and well-priced products.
Amazon's Choice for "blue touch cologne by franck olivier"
Available at a lower price from other sellers that may not offer free Prime shipping.
New (9) from $22.30 + FREE Shipping

4.0 out of 5 stars
4 out of 5
152 global ratings
How are ratings calculated?
To calculate the overall star rating and percentage breakdown by star, we don’t use a simple average. Instead, our system considers things like how recent a review is and if the reviewer bought the item on Amazon. It also analyzes reviews to verify trustworthiness.

Real Raleigh Reviewer
5.0 out of 5 stars A stunning surprise!
Reviewed in the United States on November 16, 2013
Verified Purchase
This is a VERY pleasant surprise. I own an embarrassingly large wardrobe of fragrances and I buy almost evenly distributed from the cheaper synthetic designer fragrances up to the Montale, L'Artisan Parfumeur, Creed and Amouage. I sprayed this and right from the fist smell I couldn't believe it wasn't one of the more high-end designer fragrances, or dedicated fragrances houses.

The package came in a somewhat loosely wrapped box, and the box didn't impress. However, the bottle is incredibly cool with the square center tilted at a few degrees outward from the main body of the bottle. A very cool touch.

The fragrance: the closest I can describe it is Passage D'Enfer by L'Artisan Parfumeur. And close, it is. And I absolutely ADORE Passage D'Enfer. If this Black Touch is synthetic, perhaps it won't last as long on the skin, and so it does not appear to after about 1 hour of wearing it, but the comparison is to a very demure, elegant, coriander, lily, musk, extremely natural fragrance that costs $150 per bottle - and here it is, shockingly, for a bit over $20. I've had a spray of Passage D'Enfer on the other wrist to make sure I didn't dream it, and I have not - they are extremely, extremely close, with Passage D'Enfer having the barest edge on refinement and a clear edge on sillage. Longevity of the dry down is, shockingly, proving comparable.

But this bottle has not only paralleled one of my top-25 fragrances in my entire (300+) wardrobe, but it has done so at around $22 delivered. I do not believe this is the self-same high-quality, natural components of that fine fragrance, but boy, is it close. Almost as great as if someone said, I can sell you a bottle of Montale Black Aoud for $20.

It is a fascinating fragrance for someone who's had many. It has this wonderfully vegetal, coriander, light floral, dry basenote. It's not for young people clubbing and it's not for old people going to bingo, it's for people with variety and class, something unique. To wit, my wife isn't crazy about it, she thinks every wood scent smells like incense, and can't tell the difference between this and, say, Tauer's Incense Rose, or Messe de Minuit by Etro. So anything chypre in nature, any oudh or wood, or incense, she thinks is incense and won't take it seriously. It's just to say, fragrances in this range of uniqueness are polarizing and may not be completely accessible to those who don't appreciate a variety of fragrances.

In other reviews I've criticized the fragrances that smell like 10 others you can buy for $10 to $100 per bottle - if you're in an elevator, will half of the other people have exactly the same fragrance? This one is terrific, it's a great niche in the chypre/floral area, and that it faithfully represents such a monumental blend as Passage D'Enfer, to me, is just absolutely stunning.

Cletus van Damme
5.0 out of 5 stars Seriously, this is THE BEST under $30 cologne on the market
Reviewed in the United States on May 15, 2013
Verified Purchase
I have wrestled with the idea if I even wanted to write a review for Black Touch... I love it so much that I don't want the cat to get out of the bag... A part of me would shrivel up if this became the new "One Million" (but a part of me knows that it won't because the smell if for 25 + )... This seriously is THE BEST cologne you can possibly get for under $30. It is nothing short of dynamic.. I'm not kidding or being over dramatic..

I have read a few reviews that have compared it to Terre D'Hermes, and I have to agree with them... BUT it has a darker edge too it.. This is not a CODE or Drakar Noir knock off (like many cheaper fragrances tend to be).. This is a more of a oriental Terre D'Hermes. It is a silver bullet that WILL get complements. I wore this out to a new bistro that just opened up and my friend's wife just had to ask what was making me smell so good..

If you do purchase this, PLEASE don't tell everyone what it is... Let this mysterious smell be just that... a mystery.
Read more
21 people found this helpful
Helpful
Comment Report abuse

T. D. T.
4.0 out of 5 stars Good.
Reviewed in the United States on April 23, 2017
Verified Purchase
People compare this to Terre D'hermes For Men, which is quite a bit more expensive. It is somewhat similar but replaces the orange oil I get from Terre with a synthetic vanilla. Terre is simply a higher quality fragrance. However, this is fine taken on it's own, and I wear it often, a good office scent.
Read more
3 people found this helpful
Helpful
Comment Report abuse

David Wakelee
5.0 out of 5 stars Great spicy and fresh scent
Reviewed in the United States on June 6, 2020
Verified Purchase
Sexy and spicy. Decent longevity and sillage. It's smells a lot more expensive than what it actually costs which is a good thing. I've gotten many compliments on it and usually wear it in the fall or winter.
Read more
Helpful
Comment Report abuse

Dra
5.0 out of 5 stars This may not be one of the most popular brand but it's quality is up there. It smells good.
Reviewed in the United States on October 18, 2019
Verified Purchase
My favorite is Bluetouch and been using it for years, but this Black Touch is as good. Love it. It's worth every penny.
Read more
One person found this helpful
Helpful
Comment Report abuse
See all reviews

Ikram D.
1.0 out of 5 stars Fake
Reviewed in the United Kingdom on October 4, 2020
Verified Purchase
As the picture shows the box is sealed in a weird manner. It also looks like there is some kind of liquid or oil between the box and the plastic cover. It looks horrible. no need for me to open it and confirm that it is FAKE.
Read more

OLU MOSES
5.0 out of 5 stars Very good and lasting smells all day long
Reviewed in the United Kingdom on September 11, 2018
Verified Purchase
The best among the rest
Read more
One person found this helpful
Report abuse

Page 1 of 1 Start overPage 1 of 1
This shopping feature will continue to load items when the Enter key is pressed. In order to navigate out of this carousel please use your heading shortcut key to navigate to the next or previous heading.
Back
Next
Pages with related products. See and discover other items: perfume deodorant, Hermes Perfumes, Men's Cologne Testers