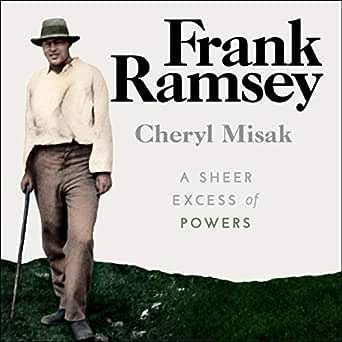 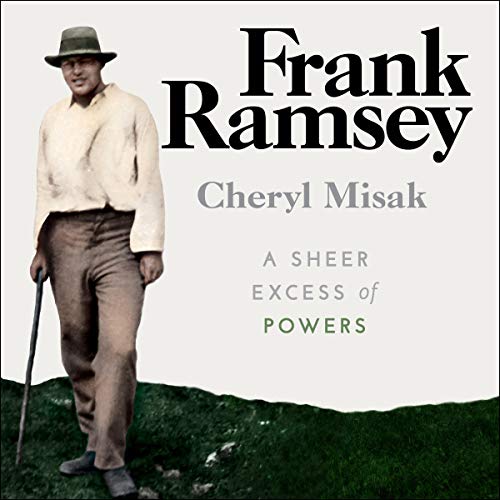 List Price: $24.49
You Save: $3.06 (12%)
By completing your purchase, you agree to Audible’s Conditions Of Use
Sold and delivered by Audible, an Amazon company

4.7 out of 5 stars
4.7 out of 5
81 global ratings
How are ratings calculated?
To calculate the overall star rating and percentage breakdown by star, we don’t use a simple average. Instead, our system considers things like how recent a review is and if the reviewer bought the item on Amazon. It also analyzes reviews to verify trustworthiness.
Top reviews

Anthony
4.0 out of 5 stars Very Interesting individual
Reviewed in the United States on July 13, 2020
Verified Purchase
I didn’t like this book much at first. Too rambling. Too much tedious irrelevant detail. Read like an Academic gossip column. Who knows who, who’s sleeping with who, who’s who in the zoo. Who cares. But it got better.
It does eventually give a good portrayal as Ramsey as a man, life and times and all that. The twenties (1920s) was a pretty amazing decade - full of brilliance. (Soon to be crushed by global depression, nazism and a second vastly worse global war. 2020s anyone?) Life in the Cambridge set is well portrayed. Wittgenstein comes across as a real piece of work. Though we already knew that.
It does eventually give some account of Ramsey’s original work. In philosophy, mathematical logic, probability and decision theory, economics, and mathematics/combinatorics. ( Try to twist your head around Ramsey numbers, as they are now called, if you’re up for a challenge. ) As the author freely admits this is a daunting task for anyone but he does a reasonable job of it. A bit rambling. Aided and abetted by Wikipedia like inserts from individual experts in the various fields. Which actually detracts from the book. We can always look up Wikipedia. What we’re looking for is a coherent unified narrative. If you’re not up to the challenge don’t jump in the pool.
By all accounts Frank Ramsey was a rare human being. Extraordinarily intelligent, thoughtful, creative and imaginative, hard working, friendly and decent, with a deep concern for others and for greater social justice and economic/political freedom for all. He died of liver failure when he was only twenty six years old.

Robert P. Neuman is a retired college professor and management consultant
5.0 out of 5 stars Wittgenstein's Foul Bathmat
Reviewed in the United States on October 14, 2020
Verified Purchase
It's a tribute to the excellence of this fine biography that it can be read at several levels: the upper stratosphere of economics, philosophy, and mathematics; a midlevel by those interested in the hijinks of the Bloomsbury group; and finally, by readers like me, who are amused by anecdotes about intellectual eccentrics. For example, the Cambridge don fired from his job in the 1920s because it was found out that he used "engines of love," that is, condoms. (207) Or that Ramsey, the great mathematician, to his surprise, often found his bank account empty when he thought it full (254); or that a Communist don could be employed at Cambridge in the 1940s as long as he gave two week's notice before blowing up the college chapel (301) Worth noting that this was on the eve of the purge of Marxist economists from the ranks of the American professoriate. And finally, we read here that Ludwig Wittgenstein, Ramsey's intellectual sparring partner, slammed the lavatory door at night (347) and demanded the return of a foul bathmat he left behind when he moved abruptly (433) Trivia? Yes. Funny trivia? I think so.
Read more
5 people found this helpful
Helpful
Report abuse

Paul E. Oppenheimer
4.0 out of 5 stars An Extraordinary Mind
Reviewed in the United States on April 13, 2020
Verified Purchase
In his brief 26 years, Frank Ramsey influenced many of the areas in which I work. This biography of Ramsey taught me much.
Read more
7 people found this helpful
Helpful
Report abuse

Amazon Customer
5.0 out of 5 stars Very interesting and readable
Reviewed in the United States on October 6, 2020
Verified Purchase
I found Ramsey and the people he used to hang with fascinating . These were super smart and creative people that were trying out new things as far as morals or the lack of it is concerned. Since I have an economic background did I really enjoy that part of the book .The deep philosophical stuff was over my head. If you have a basis in that,I am sure you'll like this book a lot. Ramsey was truly a remarkable person for his time
Read more
2 people found this helpful
Helpful
Report abuse

History nut
5.0 out of 5 stars The pleasures of genius (better than the duties of it)
Reviewed in the United States on April 29, 2020
Verified Purchase
Homage to a great philosopher and the kind of human person we all want to know...
Read more
3 people found this helpful
Helpful
Report abuse

Susan
3.0 out of 5 stars If only…
Reviewed in the United States on May 10, 2020
Verified Purchase
Great book about a great man. My ignorance about the intellectual atmosphere and the great people circa 1920s kept me from really enjoying and understanding this work.If only…
Read more
One person found this helpful
Helpful
Report abuse

David Howard
5.0 out of 5 stars Fascinating book.
Reviewed in the United States on June 6, 2020
Verified Purchase
Read about it in the New York Review of Books. The most brilliant guy you've never heard of. Philosophy, mathematics, economics, Frank Ramsey made important contributions to all of these fields in his short life.
Read more
One person found this helpful
Helpful
Report abuse

Amazon Customer
5.0 out of 5 stars As a biography great and even better as an analytical guide.
Reviewed in the United States on September 6, 2020
Verified Purchase
Headline says it all. Thanks.
Read more
Helpful
Report abuse
See all reviews

During his tragically short life (he died in 1930 shortly before his 27th birthday) Frank Ramsey made significant contributions to philosophy, economics and pure mathematics, many of which were not recognised until many years later. He was influenced by, but also influenced Wittgenstein, Keynes and Bertrand Russell.

If describing someone as a genius means anything, clearly he was one of the greatest geniuses of the last 100 years. And yet he is virtually unknown outside academic circles. Why? Perhaps because it has been difficult for someone who isn’t an “expert” to get to grips with the range and depth of his achievements – where they came from, what they mean and the effect that they have had.

Until now, that is. In “Frank Ramsey - a sheer excess of powers” Professor Cheryl Misak not only gives a warm and insightful account of Frank Ramsey the man, but rises magnificently to the challenge of putting his ideas across to a general reader with sufficient detail to be useful and clarity to be understandable (and, if you want to know more, the book contains short sections, that can be read separately in which specialist scholars explore particular ideas in more depth).

This book is a remarkable achievement which I can’t recommend highly enough. As someone else has already said “Finally Ramsey has the biography he deserves.”

If you already know anything about Frank Ramsey you’ll want to read this book.

And if you know nothing at all about him you should read this book.

PS: OUP – when this comes out in paperback put the photographs in a separate section on shiny paper where they can be seen properly, not scattered through the book, muddily printed on text paper.

Intellectually the breadth of his work in the short period of his life was amazing. I am an economist and so familiar with his work in this area. His work on subjective probability, the influence of pragmatism and his later work on truth were new to me and were explained clearly in a way that has left me wanting to understand and read more. The sections on logic and the philosophy of Wittgenstein and Russell I found harder going, maybe because the material is more challenging and less familiar to me.
Read more
5 people found this helpful
Report abuse

S Wood
5.0 out of 5 stars The smartest person you have never heard of
Reviewed in the United Kingdom on July 1, 2020
Verified Purchase
Surprising how little known is Frank Ramsey. This book describes a likeable man who made lasting, world class contributions to many disciplines. An absolute genius who is done proud in this excellent, very readable biography. Highly recommended.
Read more
3 people found this helpful
Report abuse

J.R. Gill
5.0 out of 5 stars Pleasure to read
Reviewed in the United Kingdom on April 26, 2020
Verified Purchase
Cheryl Misak does a wonderful job at casting light on Ramsey’s life and intellectual development. She also gives a very vivid description of Cambridge in the early 20th century.
Read more
One person found this helpful
Report abuse

Mary
5.0 out of 5 stars Heartwarming
Reviewed in France on May 19, 2020
Verified Purchase
What I enjoyed so much about this book is the obvious affection of the author for Ramsey and his family. So often academic biographies are just that - academic - and the characters don't shine through. I knew about Ramsay's work and influence, but I had no idea that he had such an attractive personality.
Read more
Report abuse
See all reviews