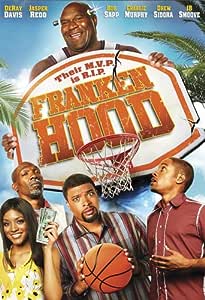 Share
STREAM ANYTIME with Prime Video from $3.99
Have one to sell?
Sell on Amazon

Motown (DeRay Davis) and Darius (Jasper Redd) work in a morgue, trading put-downs and toiling among the most undemanding of customers. But outside of their decidedly dreary jobs, the two dream of bigger and better things. If only they could win the $25,000 prize that will go to the winners of the upcoming 3-on-3 Streetball Tournament. One night, having been demoted to graveyard shift, they run into their semi-sane colleague Franklin (Charlie Murphy) in a dark alley outside the morgue. They find Franklin using the auto battery of Motown's precious Gremlin to bring to life a monstrous dead man (Bob Sapp) whose heart Franklin has just replaced. That 3-on-3 basketball tournament isn't looking so bad...if they can just get their new mutant friend to play basketball!

3.6 out of 5 stars
3.6 out of 5
15 global ratings
How are ratings calculated?
To calculate the overall star rating and percentage breakdown by star, we don’t use a simple average. Instead, our system considers things like how recent a review is and if the reviewer bought the item on Amazon. It also analyzes reviews to verify trustworthiness.
Top reviews

Micheal Hunt
3.0 out of 5 stars Bit better then expected!
Reviewed in the United States on June 28, 2009
The movie is about these two guys who work in a morgue who find themselves being dragged into some sort of Dr Frankenstein's operation to re-animate a corpse. Something goes wrong and the Dr ends up being taken away for medical treatment and the two guys go back to there night security job having thought that the experiment didn't work.

However, it did work. And Frankie is brought back to life. At first he seems like an out of control monster, but with a little fried popcorn chicken and a lot of weed, the trio become a posse ready to become cool and help train Frankie on how to use the toilet and play Basketball to win a tournament for $25,000 ...as well as get the girls along the way while taking on the typical bully like characters.

So the plot sounds pretty thin, but it's a comedy. I was expecting some kind of updated and adapted to the hood version of Frankenstein, but it shows pretty much no resemblance to it at all apart from re-animating a corpse back to life.

The name kind of makes little sense, as the so called HOOD seems like a pretty nice place to live except for the villians who who will attempt to give you a paper cut if you try to beat them at Basketball.

It seems to take inspiration from "Above the Rim", "White Men Cant Jump" and "Frankenhooker"

The movie doesn't take itself seriously, and it's just made for fun. So give it a rent at least.

Aaron
3.0 out of 5 stars Not bad. Just very wacky/silly. And at times Goofy.
Reviewed in the United States on January 7, 2013
I wanna start off by saying i think this film may have been originally filmed in the 2.35 aspect ratio, and then cropped for some stupid reason as several scenes have stuff on the side cut off, or at least it appears that way to me. If thats the case that was a stupid move. Anyway, this film isn't bad at all. Deray Davis is great as always along with comedian Jasper Redd, Charlie Murphy, J.B. Smoove and Bob Sapp are good too. I noticed that several scenes mainly The Basketball tournament and club scenes feature several people walking in front of the camera, or awkward zooming. The filmmakers didn't really know what they were doing it seems but its not terrible filming by any means. Just clunky. Check this out if you're bored and in need of a laugh or 2.
Read more
One person found this helpful
Helpful
Comment Report abuse

Ron
5.0 out of 5 stars Frankenhood, Number One For Just Plain Fun!
Reviewed in the United States on April 27, 2009
I just finished watching "Frankenhood," a hilarious new DVD scheduled for release by Lionsgate on May 5; and I can tell you that this film consists of ninety two minutes of nonstop laughter and sheer fun.

The plot of the film is not very complicated although at times, it borders on the unbelievable. But hey, that's what makes watching it so much fun! Motown (DeRay Davis) and Darius (Jasper Redd) work in a morgue, trading put-downs and toiling among the most undemanding of customers. Outside of their decidedly dreary jobs, the two dream of bigger and better things. If only they could win the $25,000 prize that will go to the winners of the upcoming 3-on-3 Streetball Tournament. One night, having been demoted to the graveyard shift, they catch their semi-sane colleague Franklin (JB Smoove) in a dark alley using the auto battery of Motown's precious Gremlin to bring to life a monstrous dead man (Bob Sapp,) whose heart Franklin has just replaced. Now if they can just get their new mutant friend to play basketball, the basketball tournament is theirs! Teach a dead man how to play basketball? Yep, that's the plan! Now you know why I say the plot is a little unbelievable in places.

Without question, Davis and Redd provide the engine that keeps the film running at top speed. They work smoothly together and their timing is excellent. But in my opinion, Bob Sapp had the toughest role to play; portraying a dead man who is trying to relearn the facts of life while mastering the nuances of the fast break and the slam dunk. All these things and more, he accomplishes credibly.

Speaking of the facts of life, there is more than enough love interest to go around, thanks to a bevy of toothsome beauties that include Drew Sidora, the up and coming actress, singer, and recording artist. I assure you that that if anyone would be capable of raising me from the dead it would be her!

The timing for the release of "Frankenhood" couldn't be better. Spring is in the air and before you know it, summer will be here. Soon it will be time to chill out and enjoy the simpler things in life. "Frankenhood" fits that scenario perfectly; nothing serious, nothing complicated, just plain fun to watch!
Read more
One person found this helpful
Helpful
Comment Report abuse
See all reviews