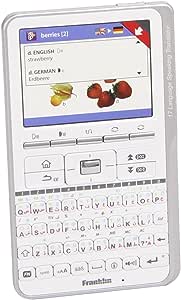 With access to over 2 Million entries and 14,000 phrases, the 17-language portable device lets you say (and spell!) it like you mean it. You can upload your own phrases with a USB connection. Recorded human pronunciation makes sure you're understood...whatever the language! This powerful translator is an indispensable tool for students, language lovers and world travelers. Translates words and pre-programmed phrases to and from 17 different languages. You can also learn pronunciation by listening to the words and phrases spoken aloud in human recorded voice. A robust all-in-one device and absolutely invaluable for anybody who travels.

3.3 out of 5 stars
3.3 out of 5
44 global ratings
How are ratings calculated?
To calculate the overall star rating and percentage breakdown by star, we don’t use a simple average. Instead, our system considers things like how recent a review is and if the reviewer bought the item on Amazon. It also analyzes reviews to verify trustworthiness.
Top reviews

Claire K.
5.0 out of 5 stars So far, worth the money.
Reviewed in the United States on June 13, 2013
Verified Purchase
I just got this translator today, but so far, I would say it is worth the money, which it was slightly cheaper when I purchased it. It has a touch screen, which I did not realize until I accidentally touched the screen. I haven't needed to look at instructions, because the features are very nicely laid out. I will probably read the manual when I start downloading phrases. Also, you can add words and phrases to the already large database of programmed words and phrases. I purchased this for my trip to Russia. I leave tomorrow, so I will update this when I have used it in Russia. What I can see so far is that the translations I know seem to be correct. Features I like are translator, phrases, translation in target language and English pronunciation - I assume if the original language is, say German, then the pronunciation would be in German. I also like how easy it is to switch between languages. When you switch to languages that do not use an English alphabet, the keyboard switches to the correct alphabet instantly. You can also listen to original language and translation by the simple click of one of two buttons. I will not use the visual dictionary, since Russian is not included in it, but it looks like it would be very helpful to people who use English, German, Spanish, French, or Italian.

The languages that are included in this translator are Arabic, Chinese, English, German, Italian, Korean, Portuguese, Spanish, Vietnamese, Farsi, Dutch, French, Hindi, Japanese, Polish, Russian, and Turkish. All languages are interchangeable and can be used as either source language or target language. This is truly a versatile device. I am surprised it is the price it is.

Oh, and the battery is rechargable AND it comes with an American plug, European plug, and another plug that I cannot identify.

Calvin H. Long
5.0 out of 5 stars Perfect travel companion
Reviewed in the United States on February 21, 2016
Verified Purchase
The 17 languages translator is an excellent tool for travel helps in communication with other languages. It contains most of the common category for your travel needs and function without internet.
Read more
3 people found this helpful
Helpful
Comment Report abuse

Raymond
5.0 out of 5 stars Great Translator
Reviewed in the United States on April 20, 2014
Verified Purchase
This has been a very valuable tool to help us travel in countries that we may know little of the language. It not only gives us the written translations but also the spoken translation as well. The other added features is a converting options for C to F, currency (that you can update to reflect current exchange rates). Battery power is fabulous. The "Search" feature is better than the "Translator " feature because it scans the entire unit for expressions with the word in it. The only negative is that it does not have a very useful instruction booklet so I had to learn on my own how to fully use the unit.
Read more
6 people found this helpful
Helpful
Comment Report abuse

Anne Quinn
5.0 out of 5 stars Does what it advertises; minor glitches in design, overall a good product.
Reviewed in the United States on April 8, 2014
Verified Purchase
This is a great little device if you're interested in many different languages and don't want to bring a little dictionary of each along with you - those pocket dictionaries can add up! Looked around, and noted most of them were too pricy for me (over $150 is a bit much, no?). Got this for $100, really fast shipping from the company in Delaware (two days!) to my apartment in Virginia.

First, the bad parts. You can set the clock to whatever time you want, but the other reviewer is right - the installments for hours are messed up. You can finagle a time for your time zone and also a world time zone, but don't except the country flags to match up if you want the right time. I just check online what the time is where I am (Eastern US; EST) and what it is in Germany; to get the right time difference, I had to set the US time to Seattle time (PST) and the "Germany" time to Zurich in Switzerland. I just remember that the time is for Germany, not Switzerland, and it's not a big deal to me, but someone might like to know that.

The alarm is an ear-piercing beep that reminds me of a fire alarm - having the volume set on 1 is PLENTY enough to hear it and not send your neighbors running for fear of fire in the building. The audio quality isn't the best - probably due to being on such a small device - but the words are understandable and sound like a native speaker's voice. I speak German, Japanese and French (with varying degrees of fluency), and ran through a bunch of translations for quality-checks, and all seemed OK. (Except that one where the English-German translation for cantaloupe was "muskmelon" and for honeydew it was something random in English, too? But most were OK.)

The dictionary is an invaluable tool, for me. I often use the "Search" aspect, since it searches EVERYTHING - phrases, dictionary, and others. You can also record voice memos, which is a neat feature if you feel like learning words that way - seems like it could be very convenient. The Fn+M for Menu button isn't all that big an obstacle if you're used to texting; it's sort of the size of a smartphone, with limited touchscreen function. For languages (like German, French, Spanish, Italian) with masculine/feminine/neutral/plural articles, check the dictionary entry for the words <N f> for feminine nouns, <N m> for masculine nouns, and so on. Especially helpful for German, although in the Visual Dictionary I note the articles do NOT come up - it's an easy matter to look up the same word in the dictionary to get the article, though. Weird oversight, but work-around-able.

You can tap the two flags (source language > output language) to switch; say, from looking up things in English-German, it'll switch to German-English, or you can choose another language entirely from the menu that pops up. Easily able to switch dictionary readings from German-Japanese, French-Japanese, and so on, by using the right two buttons directly under the screen. The verbs are NOT conjugated, however if you're familiar with the language and just need to know the verb to use (and thus, know how to conjugate) it shouldn't be too much trouble.

All in all, I wanted a good dictionary in a lot of languages, with some bonus fun features. It's light and would easily fit in a pocket, and the battery hasn't died on me, yet. Definite points for those language nerds out there who randomly want to look up vocabulary that pops into their heads, and great for finding verbs you need. I'm headed to Germany in probably about a month, so I have plenty of time to play with it. Will update this review if anything crops up. Recommend this if you want to use it for what it's made for - not a lots of bells and whistles, just information for language-learning. Happy trails!

Glanced through the phrases; typical tourist questions, but handy in the right situation, as always.

ShizelKadizal
5.0 out of 5 stars Very helpful for the money
Reviewed in the United States on August 14, 2013
Verified Purchase
Very helpful if you don't have unlimited data on a trip, you can use this just about anywhere, and get by with it. I only speak English, and it worked like a charm.
Read more
11 people found this helpful
Helpful
Comment Report abuse
See all reviews