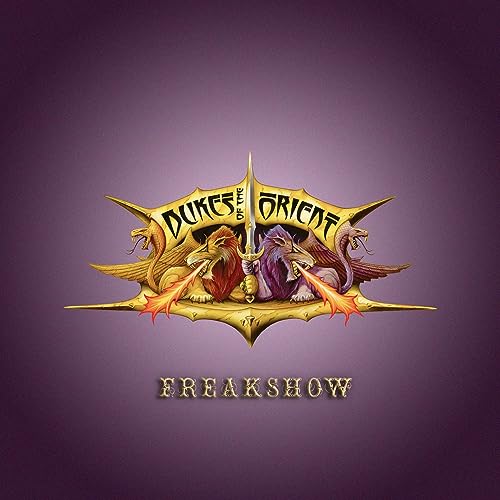 Dukes of the Orient
August 7, 2020
4.3 out of 5 stars 91 ratings
See all 2 formats and editions Hide other formats and editions
Buy the CD album for $13.98 and get the MP3 version for FREE.&nbspCD album ships from and sold by Amazon.com. Terms and Conditions. Does not apply to gift orders. Complete your purchase of the CD album to save the MP3 version to your Music Library.

4.3 out of 5 stars
4.3 out of 5
91 global ratings
How are ratings calculated?
To calculate the overall star rating and percentage breakdown by star, we don’t use a simple average. Instead, our system considers things like how recent a review is and if the reviewer bought the item on Amazon. It also analyzes reviews to verify trustworthiness.
Top reviews

Bawlmer Guy
4.0 out of 5 stars Wrinkles in time
Reviewed in the United States on August 9, 2020
Verified Purchase
Freakshow represents very satisfying progress from the debut collaboration between John Payne and Erik Norlander -- a mere two or so years later, the blink of an eye compared to the lengthy process that finally pried the first Dukes of the Orient album out of Payne's Asia-obsessed hands in 2018. That's likely down to Norlander, an efficient composer and producer on his own. Both musicians embrace the soundscapes of the 70s and 80s, and their time travels here incorporate rarified concepts that may not be brand new but are certainly uncommon 40+ years after this kind of material was in vogue. It's entirely well intended, mostly well wrought, and definitely welcome.

An intriguing aspect of the songwriting credits is that each partner solely authored half of the songs, a departure from the shared-credit approach used on the debut album. It's an equitable arrangement that reveals the strengths and idiosyncrasies of the artists, as well as the support each lends to the other's work. An excellent example is Payne's standout song "Man of Machine," an absolute gem of the rock form thanks to Norlander's first-rate keyboard work coupled with Payne's smoother-than-usual vocals...and saxophone!

Thefurnaceman
5.0 out of 5 stars John Payne and Erik Norlander give us another gift.....this time with a great saxophone player
Reviewed in the United States on August 10, 2020
Verified Purchase
This is fantastic. I’m used to albums with traditional guitar solos. We all love guitars so it’s all good, but the addition of Eric Tewalt on saxophone really knocks this out of the park. Great songs with sax solos is just beautiful. Thanks to all the superb musicians involved with this project.
Read more
Helpful
Report abuse

Karl
3.0 out of 5 stars Freakshow review
Reviewed in the United States on September 24, 2020
Verified Purchase
A bit of a different direction for the Dukes, but as the guys said that was by design. The album has a a different sound than the debut album. It sounds a little less familiar than the typical John Payne era Asia music. I'm surprised that Norlander and Payne did not co-write any songs together. Offhand I like their debut album better.
Read more
Helpful
Report abuse

Enigma Jumper
3.0 out of 5 stars Major Departure from Dukes Debut
Reviewed in the United States on August 12, 2020
After absolutely convulsing with glee over the first Dukes Of The Orient album, I was extremely eager to savor their sophomore release. Unfortunately, "Freakshow" falls well short of the duo's eponymous debut. It isn't so much the music or the musicianship itself that fails to deliver. John Payne's vocals have never sounded more passionate and Erik Norlander's keyboard work is at the top of its game. The issue "Freakshow" presents to this listener, and no doubt will to any fan of Payne and Norlander's work with Asia (and "Asia featuring John Payne") is the stylistic departure between the new offering and the first album. It stands to reason that this would have happened, however. Remeber, Dukes 1 was comprised primarily of tracks which had been intended for the Asia album which was to follow "Silent Nation" (workingly dubbed as "Americana") prior to Payne's ousting from the band due to the original members reuniting. So what we really got on the first Dukes was far more influenced by Payne and his work with Asia from more than a decade earlier. On "Freakshow" there really are none of the same types of songs which appeal to those fans who prefer a more accessible AOR sound with progressive touches and overtones. Instead, the latest Dukes is all about prog, and mainly a nod to the old school traditions. This album has Norlander's love for retro keyboards all over it, which isn't a bad thing for those interested in this experience. But for those of us hungry for more straight-ahead stuff like the incredible "Seasons Will Change," "4th Of July," and "A Sorrow's Crown" (my personal fav from album one), we are sadly left to starve at the smorgasbord of aural reminiscings to the likes of Genesis, ELP and Yes which have taken their place on "Freakshow". "The Monitors" is about the only track that even comes close to anything like that which was found on Dukes debut disc. Most of the remaining songs are decent and feature a plentiful helping of grandiose keys and soaring vocal work but none of them measure up to the more Asia-eqsque sounds from Dukes 1...especially the title track which, I'm sorry to say, is just plain bad. Definitely still a Dukes fan and will be spinning this one more to see if it grows. But I really hope the Dukes' next album finds a return to the style featured on the debut release.
Read more
2 people found this helpful
Helpful
Report abuse
See all reviews

Amazon Customer
4.0 out of 5 stars Surprise new album from Dukes of the Orient
Reviewed in the United Kingdom on September 25, 2020
Verified Purchase
The first Dukes of the Orient album was a wonderful continuation of John Payne's work with Asia, but I wasn't expecting any follow up since it apparently took about ten years to record. So imagine my surprise when I saw the release of Freakshow advertised. It's a much more eclectic collection of songs than the debut, with the use of the saxophone a particular surprise (but not necessarily a bad one). The best and most Asiatic track is The Monitors, which is utterly brilliant. Some of the cockney vocals on The Last Time Traveller are odd, to say the least. Erik Norlander's instrumental The Great Brass Steam Engine is mesmerising, though. So if the debut album scores 5 stars I'd give this 4 because it isn't quite as consistent - but still highly recommended.
Read more
Report abuse

Essex buyer
5.0 out of 5 stars Rocks well!
Reviewed in the United Kingdom on September 27, 2020
Verified Purchase
This is the former Asia featuring John Payne band. Erik Norlander, the co-main man, is the keyboard player and adds a lot to the sound of this album. Erik also writes five of the ten tracks, one being an instrumental. This is as good an album as John Payne has been involved in, whether it’s AFJP or DOTO. There is some sax playing on this album too, giving it a new dimension. Enjoyable!
Read more
Report abuse

Panda
4.0 out of 5 stars Sound Like Asia
Reviewed in the United Kingdom on November 22, 2020
Verified Purchase
Item arrived early and undamaged, cd played without issue, on this album they sound a lot like Asia, which is no bad thing, I liked this album. Shall be buying the follow up! Recommended!
Read more
Report abuse

Rocks
5.0 out of 5 stars Best buy
Reviewed in the United Kingdom on September 25, 2020
Verified Purchase
Best cd out at the moment
Read more
One person found this helpful
Report abuse
See all reviews