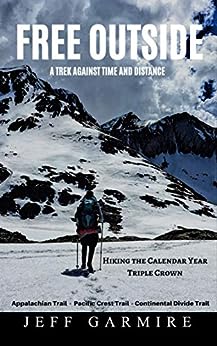 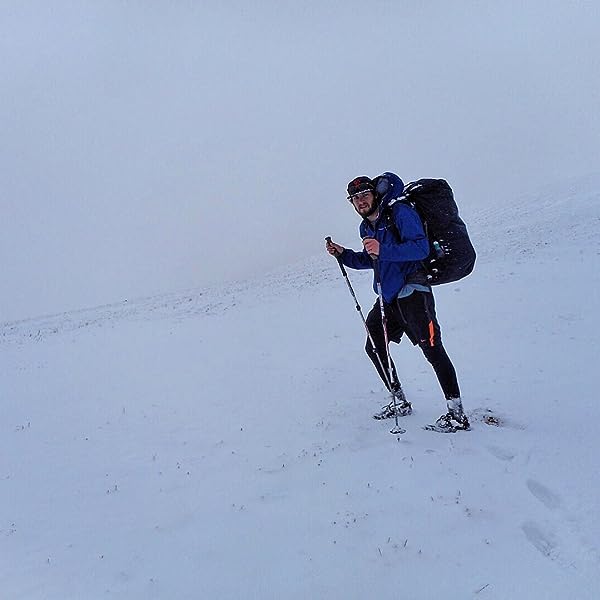 Free Outside: A Trek Against Time and Distance Kindle Edition

4.5 out of 5 stars
4.5 out of 5
345 global ratings
How are ratings calculated?
To calculate the overall star rating and percentage breakdown by star, we don’t use a simple average. Instead, our system considers things like how recent a review is and if the reviewer bought the item on Amazon. It also analyzes reviews to verify trustworthiness.
Top reviews

Richard
3.0 out of 5 stars Remarkable journey
Reviewed in the United States on December 23, 2019
Verified Purchase
Even though this hike was remarkable and inspiring, the telling of the story left me conflicted. I had no problem getting through the first section with the AT hike, but by the middle of the PTC story I was ready for the end of the book. I don't know if the readers need the details of every day for over 250 days of hiking. I finished the book feeling like something was missing. The story abruptly ends at the Mexican border without any follow up and many questions unanswered. The author's hike was epic, but some of the things he did to accomplish this feat were borderline dangerous and in some cases probably illegal. I just hope readers who want to replicate this accomplishment do not mimic some of the things Mr Garmire did. A hiker drowned trying to cross the Kennebec in April 2018. Even though the author gave few details, I suspect his camping overnight in Baxter State Park and the ascent of Katahdin the next day violated park rules.
Read more
12 people found this helpful
Helpful
Report abuse

Green Stone
4.0 out of 5 stars Compelling story, I Felt Concerned for Jeff
Reviewed in the United States on May 31, 2020
Verified Purchase
I love to read books about epic treks like these, in part because I'm not able to undertake adventures like this myself. For one, I wouldn't be able to put up with the physical misery of such treks, the grueling hardships that Jeff describes. For another, I do not have the physical ability to do even half the miles that Jeff did on a daily basis, day in and day out for over 250 days. It boggles my mind that he averaged 30 miles a day, often hiking over 40 miles in one day, with a heavy pack over mountainous terrain.
So, I do my much shorter treks, and enjoy armchair trekking for the rest.

I was thoroughly engaged to read of all the hardships, high points, wild animals and other trekkers Garmire met. However as I read his story, I felt increasingly concerned about Jeff's diet, which seemed to weigh heavily towards sugar and caffeine. He often wrote about eating cookies, granola bars, ice cream, candy, and downing several cups of coffee, explaining that caffeine gave him energy to make it through the day. I grok that one can't have fresh veggies and salads while out on the trail, but what about on those breaks when you come into town? Why when coming into town is it pizza and ice cream? As well, he often wrote about overeating when in town, and then wrote about "dizzy spells" experienced on the trail. I was concerned about him as I read all this.
Given Jeff's eating habits as described in his book, I'm especially amazed at his strong physical performance for 8000 miles of the Triple Crown.
I just read online that after the Triple Crown, Jeff went back to work in an office, but then got depressed again, and quit work again to hike the "Great Western Loop", a 7000 mile adventure. He said, “sounds like a rash decision, but I would’ve definitely killed myself if I didn’t go and do that,” He also wrote about how he didn't think one could beat depression, only compartmentalize it. I disagree, and would say that in order to overcome depression, one needs to work through it, not just continually try to outrun it. Though Jeff's story was engaging, and his accomplishments extraordinary, I did get the sense as I read that his continual fast pace seemed like running away from pain, more than running toward a meaningful goal. I would have liked to see something of Cheryl Strayed's spirit here, more capacity for self-examination, reflection, which I think would help a lot with the depression.

I hope that Jeff continues to be able to undertake these excellent and spirit-uplifting adventures.

Alex Derr
5.0 out of 5 stars Inspiration to adventure
Reviewed in the United States on September 6, 2019
Verified Purchase
I wiped my sweaty palms and opened my eyes again. The agony was gripping my guts, but I had to keep reading. Three more ice-covered states to cross before reaching Mt. Katahdin, the northern terminus of the Appalachian Trail. My Kindle battery was running low, but I couldn’t put this book down. I felt like Jeff needed me to stick with him all the way to the final summit. Such is the raw emotion, the highs and lows of his energy, and the sheer adventure he packs into this book.

Garmire’s Triple Crown required physical toughness, mental resilience, and meticulous planning. With conditions ranging from icy mountains to scorching deserts, just staying alive required good judgement and perhaps some good luck. While sharing the triumphs, Garmire is honest about the mistakes he made, and he paints vivid portraits of the kind and generous people who helped him along the way.

This book will inspire you to take an adventure. You may not choose to tackle the Triple Crown, the Appalachian Trail in winter, or anything that requires swimming with icebergs. But Garmire’s adventurous spirit is contagious. He shows us what is possible. I’ll see you out there!
Read more
12 people found this helpful
Helpful
Report abuse

Randy Hill
5.0 out of 5 stars Hiking at the Limits
Reviewed in the United States on September 10, 2019
Verified Purchase
After hearing Jeff on Backpacker Radio, I started following him as he set the FKT on the Long Trail in VT. I knew Jeff pushed the limits, but hearing him describe the challenges, risks and mistakes he made hiking the AT has me shaking my head in disbelief. Having hiked the trails in the winter that he describes, I can vouch for the authenticity of his descriptions and am amazed at what he has done. If you want an inside look at what it takes to hike at the limit of what's possible, this is it. Just don't try it at home!
Read more
6 people found this helpful
Helpful
Report abuse

Bianca M. Salazar
5.0 out of 5 stars Gripping and Exciting Journey
Reviewed in the United States on September 8, 2019
Verified Purchase
Having quit my corporate job to thru hike, I can relate to Jeff and his choices. Following his journey has me on pins and needles as he trudges through all of the weather elements. Jeff has a wonderful way to keep readers engaged in his goal; I felt anxious during his strife, excited when things went his way or when he figured out a way to get through a tough obstacle. I'm not quite done with the book yet but I can only imagine it's going to be as thrilling as the first half. This book is great for any hiker looking to live through someone else's wandering or looking for inspiration for their next adventure. This is one of the most engaging outdoor books I've read in a long time.
Read more
5 people found this helpful
Helpful
Report abuse

A.J.
5.0 out of 5 stars Amazing story!
Reviewed in the United States on December 19, 2019
Verified Purchase
Jeff does a great job of explaining the peaks and valleys of the trail both figuratively and literally. While reading this, at times I felt like I was in his shoes, albeit maybe with feet that weren't as sore from covering 40+ miles in a day. I had the privilege of meeting "Legend" when I was hiking the PCT in 2018 and it was nice to read about his past adventure in this book. I highly recommend this book to anyone that enjoys real-life thru-hiking books, or anyone just looking to be amazed by some of the shocking tales of danger, unparalleled human kindness, intense suffering, and mental anguish that happen during a 7000 mile journey.
Read more
4 people found this helpful
Helpful
Report abuse
See all reviews

skylark
2.0 out of 5 stars Terrible ending to an epic but boring feat
Reviewed in Australia on March 8, 2021
Verified Purchase
So many things wrong with this account. Yes what he accomplished was amazing. But oh! It was so boringly written!! Such a shame. Also not nearly enough backstory and no epilogue!! Finally on another matter, is it really so impossible to get truly waterproof clothing?? So much misery could have been avoided. Deeply dissatisfied with this book. Harumph!!
Read more
Report abuse

Sidney E. Carlstrom
4.0 out of 5 stars Mind over matter
Reviewed in Canada on July 24, 2020
Verified Purchase
Probably not the smartest thing to do in one year. Proves that if you are determined & are willing to put up with a lot of discomfort & pain you can succeed. All the power to him. I would have a hard time doing one thru hike. Must be nice to be young & healthy
Read more
Report abuse

Jamie
5.0 out of 5 stars Great adventure
Reviewed in Australia on June 22, 2020
Verified Purchase
This is an amazing story of ‘Legends’ calendar Triple Crown. He’s a great story teller and it’s an epic feat. You really share in his struggles on the trail. Very motivational.
Read more
Report abuse
See all reviews