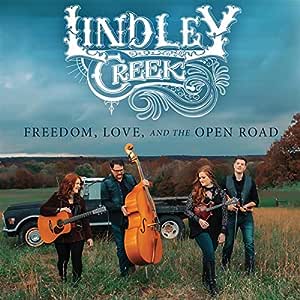 Freedom Love And The Open Road

Lindley Creek (Artist) Format: Audio CD
See all 2 formats and editions Hide other formats and editions
Includes FREE MP3 version of this album.&nbspProvided by Amazon Digital Services LLC. Terms and Conditions. Does not apply to gift orders.&nbspComplete your purchase to save the MP3 version to your music library.
Available at a lower price from other sellers that may not offer free Prime shipping.

With special guests Rob Ickes, Jason Moore, Seth Taylor, Aaron Ramsey, Todd Phillips and Cia CherryHolmes brought in as studio aces, the final project represents the album that Lindley Creek has wanted to make all along.

Freedom, Love and the Open Road features an excellent selection of songs chosen for the project along with original cuts written by Kathie and Jase Greer. Tight and smooth family harmonies are present on the recording, a phenomenon that only kin can share due to shared accents and intuition. But more than anything else, this album showcases the lead singing talents of Katie Greer.

While touring throughout the heartland from North Dakota to Texas, points mostly west of the Mississippi River in the past, they plan to connect with fans in the Southeast, the Midwest and the heart of Bluegrass Country with the release of Freedom, Love and the Open Road.

''I listened to just bluegrass music until I was a teenager, and then I began to listen to country and pop music and everything else after that,'' says Katie Greer. ''With my vocals, I feel like I draw from other musical genres and not just bluegrass. I love bluegrass, but I also love Whitney Houston and all of the powerhouse female vocalists. I also like John Mayer a lot. I like any artist that can sing really well and can connect themselves emotionally to the music. When I was in the studio recording Freedom, Love and the Open Road, I learned so much. Jim is a great teacher who really took me where I wanted to go vocally. I knew where I wanted to be, but he showed me how to get there. It was very challenging for me. But, it is cool to learn and grow and finally understand things that you have wanted to understand for a long time.'' It is an exciting time as this new band breaks into the greater bluegrass scene with passion, talent and years of experience!