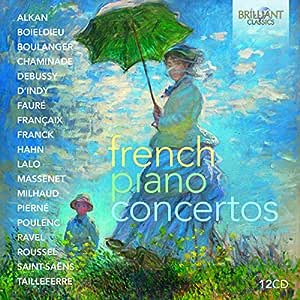 Sold by: -importcds
Add to Cart
$38.99
+ $3.99 shipping
Sold by: Classical Music Superstore
Have one to sell?
Sell on Amazon

VARIOUS ARTISTS (Artist) Format: Audio CD
4.3 out of 5 stars 18 ratings
See all 2 formats and editions Hide other formats and editions
Includes FREE MP3 version of this album.&nbspProvided by Amazon Digital Services LLC. Terms and Conditions. Does not apply to gift orders.&nbspComplete your purchase to save the MP3 version to your music library.
Available at a lower price from other sellers that may not offer free Prime shipping.

This gorgeous set is dedicated to piano concertante works from the pens of French composers infinitely varied compositions that nevertheless each bear the unmistakable flavor of their native idiom. The French piano concerto was a late arrival on the European stage, and even then many French composers would opt to combine piano and orchestra outside the confines of strict concerto form. This set hones in on the genre s heyday along with two precursors: a two-movement Concerto in F (1792) by the French Mozart Boieldieu and the early Concerti da camera Op.10 (1832 38) by the maverick genius Alkan. The set begins with the five piano concertos that traverse Saint-Saëns s career, along with concertante pieces he composed in the 1880s during a 20-year hiatus between his Fourth (1875) and Fifth (1896). The 80s were fertile for Saint-Saëns s contemporary Franck, as well, who returned to the piano after decades focusing on the organ and on choral music to create such piano concertante masterworks as Les Djinns and the Variations symphoniques. The latter work was an influence on Claude Debussy s Fantaisie, in terms of the roles assigned to the orchestra and solo piano and the work s structure, and like Franck before him, Debussy would disown this youthful work to move in a new direction surprising given the warm reception enjoyed today by the early works of both composers. The influence of Saint-Saëns and Franck would extend to several of Debussy s contemporaries, as well. Jules Massenet s Concerto in E flat, begun in his early twenties, but only finished at the turn of the century after his many successful operas, arrived too late for the shifting tastes of the time, which had turned their backs on romantic virtuosity in favor of the impressionistic and neo-classical. Three of the group Les Six figure on this set: Francis Poulenc and the charm and wit of his Concertos for one and for two Pianos, Germaine Tailleferre and the impressionistic orientalism of her Ballade, and the prolific Darius Milhaud who contributes no less than five piano concertos and four other concertante pieces. Albert Roussel and Reynaldo Hahn, though older than the members of Les Six , would only come to write piano concertos in their 50s, well into the inter-war period. Hahn s concerto is featured here in a very special remastered historic recording from 1937, with the composer at the podium and the renowned Brazilian pianist Magda Tagliaferro as soloist.