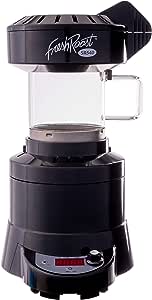 The SR540 is the newest addition to the SR family of coffee roasters. Roast capacity is 4 scoops, 120 grams. It has an improved control board. All adjustments are made with pushing the knob and turning to adjust the heat, fan, and time. It also features a real-time temperature read out. A quick turn of the knob to the right will display current temperature. There are now 9 levels of heat adjustment compared to having a Low, Medium, and High adjustment. The fan also has a wider range of adjustment. The chaff basket and top lid from earlier SR roasters will not fit on the new SR540. The roasting chamber is a much larger diameter. Users are also able to change the default start settings. These are only 120V and have a 1-year warranty. Warranty is void if shipped outside of the US.

4.5 out of 5 stars
4.5 out of 5
191 global ratings
How are ratings calculated?
To calculate the overall star rating and percentage breakdown by star, we don’t use a simple average. Instead, our system considers things like how recent a review is and if the reviewer bought the item on Amazon. It also analyzes reviews to verify trustworthiness.

Gerald E. Shenk
4.0 out of 5 stars Better than expected
Reviewed in the United States on July 22, 2019
Verified Purchase
I've been home roasting coffee for more than 30 years. If you have a well-ventilated kitchen, it's possible to do perfectly good roasts in the oven with a metal vegetable steamer. But it gets extremely smokey. My first coffee roasting machine about 25 years ago was an early air roaster similar to the Fresh Roast, but it was less than satisfactory. So I purchased the Gene Cafe drum roaster, which does nice even roasts, whether light, medium or dark. But the heating element wore out every 3 or 4 years. Finally, after about 15 years with the Gene Cafe, I lost patience with it having to constantly replace the heating element, and decided to try an air roaster again. The Fresh Roast 540 seemed to get the best reviews online, so I decided to try it. It works much better than I expected, but there are a few issues. First, the claim that it has 9 roast setting is misleading. There are 3 controls: fan speed; heat level; and time. Each can be set anywhere from 1-9. However, any fan setting less than 6 is not enough to move the beans. Any heat setting less than 8 will not be enough to actually roast the beans. A time setting of 9 minutes at the highest heat setting will get you a medium roast (varying the fan setting between 8 & 9). I was able to get a very nice medium dark roast by periodically adjusting the fan setting between 8 & 9, and adding several minutes to the initial setting of 9. This meant carefully watching the beans and adding time until they reached the roast I was looking for. So this takes a lot of experimentation until you get the roast you want. The most serious flaw is the chaff collector. It doesn't collect nearly all of the chaff, so that you will need to put the roasted beans in a colander, take it outside and use a fan, or a good breeze to blow off the rest of the chaff. If you leave the chaff, it will affect the taste of your coffee. I do know some people who don't mind that taste, but I'm not one of them. Bottom line for me is that unless you want to pay $600 or more for something like Gene Cafe, this is a good roaster for the price.
Read more
121 people found this helpful
Helpful
Comment Report abuse

Amazon Customer
5.0 out of 5 stars Great step up from roasting with a popcorn popper
Reviewed in the United States on August 11, 2019
Verified Purchase
Excellent little coffee roaster. Cooks evenly and has the controls to tweak the roast however you like. I have been roasting beans with a popcorn popper for a year, and I have found this roaster to be a giant leap forward. No stirring necessary. Easy to adjust fan after the first 1-2 minutes to roast quickly without burning any beans. The 3 minute cool stage manages to cool the beans without having to use other methods. The roasting chamber is wide enough to prevent beans from being caught (and burn). It would be nice to roast a few more beans at a time, but for me 4 batches covers up to a week. Takes about 45-55 minutes total for the 4 batches. Just love it.
Read more
22 people found this helpful
Helpful
Comment Report abuse

Go4Hike
3.0 out of 5 stars Glass Roast Chamber
Reviewed in the United States on December 22, 2019
Verified Purchase
I like this roaster, and find the glass roasting chamber visually pleasing, but in the end am disappointed with how easily the glass roasting chamber broke. I unfortunately grasped the glass handle when attempting to move my roaster a couple inches and the handle snapped clean off. Learn from my mistake, move this roaster only by grasping and lifting the base of the roaster. The roasting chamber is also quite tippy, so moving it any time is a bit risky.
Read more
13 people found this helpful
Helpful
Comment Report abuse

KMart
5.0 out of 5 stars Love, love, love my SR540.
Reviewed in the United States on June 8, 2019
Verified Purchase
The SR540 arrived in time with a small pertinent the seller took care of immediately. I like the flexibility of fan speed, temperature and time. All three can be adjusted before or during a roast. I like the higher bean volume, too. This is one awesome machine. Thank you Fresh Roast!
Read more
15 people found this helpful
Helpful
Comment Report abuse

Bradley Kahler
4.0 out of 5 stars Good home air roaster
Reviewed in the United States on October 19, 2019
Verified Purchase
My iRoast2 died so I was in the market for a new home air roaster and decided to give this one a try. For the price, this is a great home roaster! If I had more coffee drinkers in my household (it's just me) I'd probably find something that can run a larger batch size, but this is perfect for me. Build quality is good, and the temp sensor is helpful in crafting profiles. Only downside is one of the alignment tabs that keep the chaff filter aligned with the glass roasting chamber broke several roasts in when I set it down hard. I was able to glue it back on, and they aren't required for the product to work, but it's kind of annoying. It's a little quieter than my old iRoast too which helps with hearing the beans crack, particularly on second crack. I'd recommend this to anyone looking at getting into home roasting as a hobby.

One of the nice things about an air roaster is that you get efficient heat transfer from the fan blowing across the beans. Since it's almost all convection, you can use the temp sensor below the beans to make assumptions about the bean temp. I've been able to reliably make new roast profiles for beans after a couple roasts without a temp probe in the beans as a result.

Marwan
4.0 out of 5 stars QUALITY is paramount - hopeful
Reviewed in the United States on October 21, 2019
Verified Purchase
I am a long time user of Fresh Roast, 12 years to date and have been happy with the concept and functionality of this product, their build quality has declined. My 1st SR340 lasted 7yrs, the 1st SR500 lasted 4yrs and my 2nd SR500 only 1yr, thankfully still within warranty. I bit the bullet, took a chance and i am liking the new glass chamber, sturdy build and the new layout for controls. Roasting is still easy and more enjoyable. Time will tell whether or not the fan motor and the heating element hold at least 5yrs. Happy Roasting - Marwan.

1 Week after receiving product the fan motor started to make grinding sounds. Amazon sent a replacement and was received in 3 days Thank you! However, if you are receiving international shipping be mindful you have to pay out of pocket for return shipping and for duties ending up with a very costly coffee roaster.

Amazon Customer
5.0 out of 5 stars So easy, so good
Reviewed in the United States on September 14, 2019
Verified Purchase
OMG! How have I lived so long without this wonderful roaster? I foolishly (I know now) searched for quite expensive popcorn poppers to do the job with mixed results and perhaps tainted coffee from the plastic parts. This is all glass and metal and so efficient, so easy to use, so easy to clean, so intuitive. I looooove a good cup of fresh roasted coffee and cannot recommend this wonderful kitchen appliance enough. Worth the money and then some.
Read more
11 people found this helpful
Helpful
Comment Report abuse
See all reviews

Page 1 of 1 Start overPage 1 of 1
This shopping feature will continue to load items when the Enter key is pressed. In order to navigate out of this carousel please use your heading shortcut key to navigate to the next or previous heading.
Back
Next
Pages with related products. See and discover other items: Explore coffee machines for homes