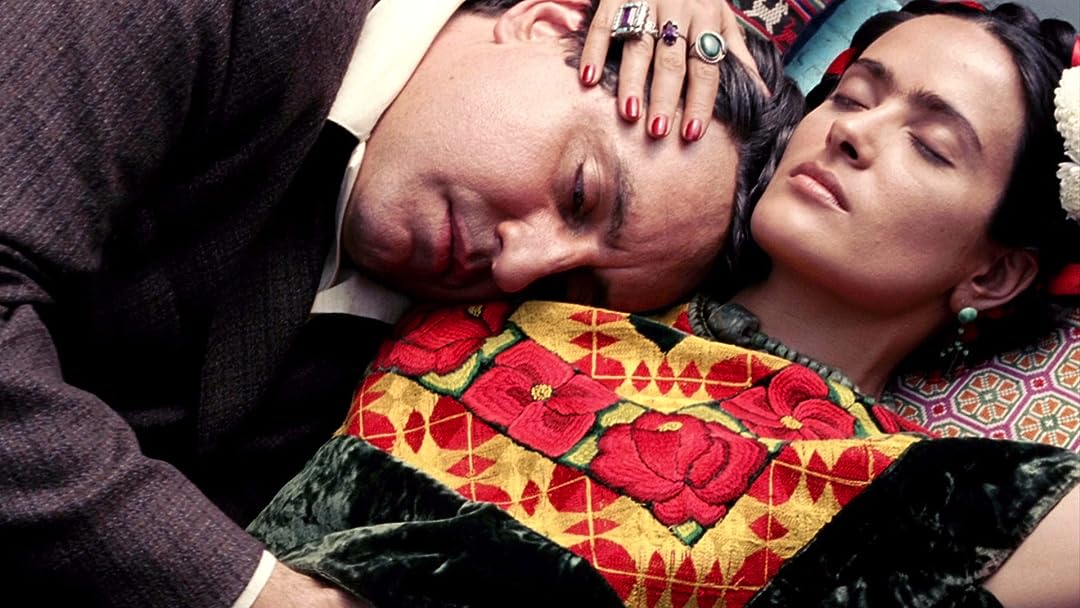 Amaranth RoseReviewed in the United States on April 19, 2018
5.0 out of 5 stars
Mi Encanta "Frida"!
Verified purchase
I have so loved this movie since it came out, Salma does a BEAUTIFUL job as Frida Kahlo! and Alfred Molina as Diego Rivera!..the story brings out literally every emotion in a person, beautifully set in 1920's - 1940's Mexico City, Teotihuacan,and her home Casa Azul...The hellish pain this woman lived her whole life due to a horrible accident, and the hell her unfaithful "panson" Diego put her through...I just can't fathom. Beautiful Mexican old folk songs like "La Llorona", as sung by the stunning voice of Mariachi singer "Lila Downs"...and as "old woman death" sung by ' Chavela Vargas" are just beyond gorgeous.
This beautiful movie makes me proud of my Mexican heritage.
14 people found this helpful

John P. Jones IIIReviewed in the United States on December 22, 2020
5.0 out of 5 stars
“Agonized poetry on canvas…”
Verified purchase
The subject quote was Diego Rivera’s description of Frida Kahlo’s paintings, at her first Mexican exhibition, rather later on in her life. Rivera and Kahlo were long-term friends and although legally married, were never husband and wife, in their own opinion, though today much of their behavior would fit under the rubric of an “open marriage,” which is so often difficult on the emotions.

Rivera and Kahlo are two giants of Mexican art and I regrettably knew very little about them, though they had lived just on the other side of that very shallow river that I once waded across at Big Bend National Park. Salma Hayek plays Frida. I first saw Hayek, only recently, in a rather unusual movie: “Midaq Alley.” It is unusual because it is an adaptation of Naguib Mahfouz’s novel “Midaq Alley,” for which he won the Nobel Prize, and is set in Egypt. The movie, successfully in my opinion, as I said in my review, transposed the setting to Mexico. As is Amazon’s custom, since I liked Hayek in “Midaq Alley,” which was released in 1995, they suggested that I might like her in Frida, and they were right. “Frida” was released in 2002. Alfred Molina gained 50 lbs., per the trivia section, to play Diego Rivera, who Frida called “panzon,” as a bit of “fat shaming.” Geoffrey Rush plays Leon Trotsky. The movie was directed by Julie Taymor.

The movie commences with Frida being moved in her bed, in a pickup truck, proclaiming that she is not dead yet. Then it flashbacks to her school days in Mexico City in 1922 and there is a very graphic depiction of the bus wreck that injured her seriously, the source of a lifetime of the agony that would permeate her art. Her mother opposed Frida marrying the twice-divorced, much older Rivera, the source of a greater, second agony, as she says in the movie. Both are the good communists of the 1930’s, seeking social justice and the good social parties, fueled with the alcohol that would also dominate Frida’s life. Early on, the movie makes her bi-sexuality apparent, another prevailing theme, with a couple very graphic depictions.

They make it to the “big leagues,”: “gringolandia.” Rivera is invited to NYC to exhibit his work, and he takes the town by storm. He secures a commission to paint a mural in the lobby of the Rockefeller Center lobby. He paints in an image of Lenin, which was just pushing things toooo… far. Rockefeller’s son pays him off, and destroys the mural.

The couple petitioned the President of Mexico to grant Leon Trotsky and his wife asylum after he was kicked out of Norway. They stay at Frida’s father’s home, with assorted body guards. Inevitably, given their characters, Frida and Leon have a fling. Naturally, Leon’s wife was not pleased, and to prevent a reoccurrence, they move out, to a less secure location, where he has the rendezvous with the hatchet in the head. Frida knows that in ways she was an accomplice to Trotsky’s murder, for if they had stayed in her father’s much more secure home…

Harvey Weinstein. What we now know taints this movie, and should be yet another movie. Sure, both Rivera and Kahlo were promiscuous. Neither appeared to be of the “notch the bedpost” variety. If they had, I suspect there would have been a rough equivalency. Driven mainly by passion, joy, yeah, maybe there was a need to prove something. But there never seemed to be an element of compulsion. In the “trivia” section, certainly a misnomer in this case, there is Salma Hayek’s statement concerning Harvey Weinstein: “It was clear to me that he would never let me finish this movie without letting him have his fantasy.” Apparently also with the director too. Now if that is not a crime against humanity, or at least “the better half,” as they were once quaintly referred to, I don’t know what is.

Still, for a most informative movie, well-acted, with beautiful composition, 5-stars.

joel wingReviewed in the United States on March 6, 2021
4.0 out of 5 stars
Mixes Kahlo's life with her love of art
Verified purchase
Frida Kahlo was one of Mexico’s most famous artists. This movie mixes her love of art with her biography. It features Salma Hayek in the lead. The combination of art and life is reflected when Kahlo gets into her accident which caused her to be put into a body cast. The doctors who operated on her are first portrayed as Mexican skeleton dolls and then when they appear as people it’s got a surreal look to it. That is a real nice touch to highlight her creativity. The film also highlights her Communist politics and her tumultuous love affair with her husband Diego Rivera. The movie really brings her to life as a person not just as an artist.
One person found this helpful

EmReviewed in the United States on September 18, 2018
5.0 out of 5 stars
Excellent Excellent Movie
Verified purchase
This story is so beautiful and captivating. Add to that the cinematography and actors and you have this brilliant movie. Frida was an amazing artist but beyond that a colorful person and a strong individual who inspired and was not afraid to share her personal pain through her art. Had she not suffered the life she did, the world would not have the astonishing fruits of her labor today. A talent she paid for dearly through all her misfortunes. Lovely movie with amazing actors (although they could have chosen someone to better to mimic a Hispanic accent than Ashley Judd...and though I usually love her acting, was disappointed with her work in this role). This is one of the few movies I could see a hundred times and never tire of. If you haven't seen it, DEFINITELY DO and if you have, SEE IT AGAIN.
4 people found this helpful

mangrove mermaidReviewed in the United States on October 25, 2020
5.0 out of 5 stars
Great Film. Excellent Production. Amazing Visuals of Highest Quality Actors, Story, Sets & Costumes.
Verified purchase
Amazing production and great story. Purchase DVD if possible. It's a classic film worth saving for your own film collection. Visuals outstanding throughout entire film. Incredible believeable story and excellent actors. Excellent Costumes, Sets & Performances by all. Five Stars !!! Pure beauty and intelligent script filled with compassion and real life challenges. Great Insight into the life of a true ARTIST. A MUST SEE FILM.
One person found this helpful

Joy KReviewed in the United States on December 13, 2017
5.0 out of 5 stars
Go Salma
Verified purchase
Just read Salma Hayek's NYT OpEd and bought this out of solidarity. I can't believe what she, Julie Taymor, and the rest of the team had to go through to get this made.
7 people found this helpful

SilvershirtReviewed in the United States on July 13, 2017
5.0 out of 5 stars
Magnificent
Verified purchase
Have watched it four times. A great film visually, with a powerful story, wonderful music, magic realism, great art, and a magnificent strong female lead. This is a must-see film by the great Julie Taymor, who created The Lion King. Salma Hayek is perfect as Frida, and Alfred Molina as Diego Rivera. Chavela Vargas, the great Costa Rican singer, appears in a bar scene singing one of her most memorable rancheras. You'll be cheating yourself if you miss this one. But be prepared for strong stuff, blood, guts, courage, and obsession.
7 people found this helpful

The BearReviewed in the United States on September 18, 2014
5.0 out of 5 stars
Absolute must-see. It will exceed your expectations.
Verified purchase
This is a very powerful movie, intriguingly presented with a wonderful story. I already thought highly of Salma Hayek, but Alfred Molina was a revelation. The actors actually looked like Frida Kahlo and Diego Rivera. I've been familiar with Diego Rivera's work for many years -- I even have complete collections of his murals and cubist work (as books; I could never afford the originals) -- but was quite unaware of Frida Kahlo's. I have since picked up a good collection of her work as well.

If you are into 20th century art and/or early/middle 20th century Mexican politics, this is an absolute must see. But it doesn't require such high-mindedness. see it for the wonderful performances of Salma Hayek and Alfred Molina.

BTW, if you are looking for a major Antonio Banderas performance, you'll be disappointed. His role is pretty minor.
4 people found this helpful
See all reviews
Back to top
Get to Know Us
Make Money with Us
Amazon Payment Products
Let Us Help You
EnglishChoose a language for shopping. United StatesChoose a country/region for shopping.
© 1996-2021, Amazon.com, Inc. or its affiliates