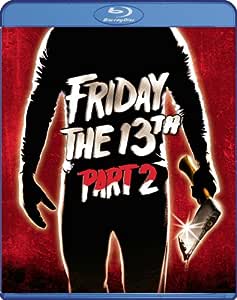 Get ready for twice the terror with Friday the 13th Part 2: Deluxe Edition! Five years after the massacre at Camp Crystal Lake, the nerve-wracking legend of Jason Vorhees and his diabolical mother lives on. Despite ominous warnings from the locals to stay away from “Camp Blood” a group of counselors at a nearby summer camp decide to explore there area where seven people were brutally slaughtered. All too soon, they encounter horrors of their own and the killing begins again. You’ll be at the edge of your seat for this gruesome thriller about 24 hours of bone-chilling fear!

4.5 out of 5 stars
4.5 out of 5
1,620 global ratings
How are ratings calculated?
To calculate the overall star rating and percentage breakdown by star, we don’t use a simple average. Instead, our system considers things like how recent a review is and if the reviewer bought the item on Amazon. It also analyzes reviews to verify trustworthiness.

C.T. Top Contributor: Star Trek
5.0 out of 5 stars The best of the entire series
Reviewed in the United States on June 5, 2018
Verified Purchase
It wasn't really a stiff competition but if you're going to watch a Friday the 13th movie then you should probably watch this one as it is the best of them, rivaled only by the original. In addition to the introduction of Jason Voorhees, also has the most likable cast in the series. Amy Steel remains my favorite of all the Friday women but I love Marta Kober's Sandra, Lauren Marie Taylor's Vicky, and Kristen Baker's Terry (even if she's only there for fanservice).

There's a lot of really great iconic moments in this story from the machete kill to the execution of a certain character from the first movie. The big appeal for the movie, though, is the fact it takes time to develop all of the camp counselors enough that you actually want to see them all survive. I mean, they won't but that's not the point. You are happy when Mark is about to have his hookup and upset when it gets interrupted by a sack-wearing serial killer.

The final confrontation with Jason as well as its attempts to actually give him some personality are particularly memorable. Whether its skinny dipping, memorable murders, or whether Paul is dead or not--this is the best. Jason may not have his iconic hockey mask yet but this is the first Friday movie which follows the formula which all of the other ones will. My only regret is they killed Crazy Ralph and we're never going to find a decent replacement for him. Well, also, "Where's Paul?"

dand
2.0 out of 5 stars Acceptable sequel
Reviewed in the United States on October 20, 2018
Verified Purchase
Ok, not one of the best sequels, but...it's the ONLY one where the survivor of the previous film is dispatched, rather horrifically. They showed too much from the first one which wasn't necessary, since the first one came out less than a year before. Why didn't Jason use Ned's crazy mask instead of a pillow case.? And why did the girl who found Jeff and Sandra dead in bed just stand there for, like 10 -15 seconds letting Jason kill her like a complete moron. And just how, where, when, and why did Jason survive his drowning, which his mother was murdering innocent camp counselors for his supposed untimely and unnecessary death. I liked Part 3 and The Final Chapter (Part IV) better, especially TFC because they brought back make up effects maestro Tom Savini, who had done the first film's make up effects outstandingly, to kill Jason. But, then they just kept doing sequels to the point of ridiculousness (each one more disappointing than the last one). This one seems to be the best produced F13 film out of all of them, with a cast of actors who had actually done ANOTHER movie besides this. Harry Manfredini's score is the best after the first one. The only other "Jason" movie I liked after this one (Part IV) wasn't until 18 years later with New Line Cinema's Jason X. It seems to get so much hate, but I thought it was GREAT. SO, Part I, III, IV, V, and X are my favs.
Read more
4 people found this helpful
Helpful
Report abuse

Providential
TOP 500 REVIEWERVINE VOICE
5.0 out of 5 stars Decent, but Forgettable
Reviewed in the United States on October 22, 2020
Verified Purchase
I like Friday the 13th as a film in its own right. It's not bad. It's definitely a good slasher film, although as a movie in its own right the series is fading from the original.

We open with footage from the first movie... always a bad sign. The runtime is only 87min with the flashbacks, so this is clearly a cash grab. What we end up getting is still a decent romp.

The best parts of the film are:

Amy Steel keeps a tradition from the first of surprisingly strong female characters. Amy doesn't just scream and run and take her clothes off, she often outright stands and fights Jason. She's smart, she's strong. The genre could learn a lot from these early movies. It's a shame she chose not to return to later installments.

Stuntman Steve Daskawisz rocks as the masked Jason. He's a huge man, with a big lumbering presence. He physically looks like an old man, hunched over and imposing, and it gives the character such flavor. The physical presence of Steve is vastly underrated in this history of horror movies. It's Steve's movements and stature that makes this character. I love watching him onscreen.

There's another solid "twist" to the ending. It's a bit of an ape on the first movie, but the series is still trying to be a "real" film at this point. There's an actual story, there's an actual continuity, this is a real place in the viewer's mind.

I barely remember anything about Part 2 except for the leads (our heroine and Jason). It's worth noting Jason still doesn't have his iconic mask yet, and I think the series loses something at that point. Here, Jason is still a human being. He's deranged, he's obsessed, he's a psycho - but he was also an abused child to end up that way. He's not just a faceless killing machine. Modern horror movies will often give only a cursory nod to setting up the Big Bad, but as of Part 2 there's actually a connection to Jason. Almost as much as you'd have to Freddy in Nightmare on Elm Street, or another fairly character-driven horror movie.

Part 2 is a mediocre film, with some stand-out performances that make it a great slasher movie. The effects still rock too, so it's worth a watch.

😠
5.0 out of 5 stars More Jason
Reviewed in the United Kingdom on May 21, 2018
Verified Purchase
On par with the first film, part 2 offers more of the same, but is definitely gorier, and cements Jason as a horror icon. Its been 5 years since the massacre at Camp Crystal Lake and everythings settled down. A new troupe of unwitting counsellors have come to a camp not far from the original murders to do..... whatever it is counsellors do? Sadly Jason... all grown up now... wants to join in the fun.

FJY
2.0 out of 5 stars Very Average Slasher Flick
Reviewed in the United Kingdom on November 17, 2014
Verified Purchase
This film, first released in 1981, was the first sequel to Friday The 13th and the first to feature Jason as the killer. He doesn't get his trademark hockey mask until the next film, though, so in this one he wears a sack over his head, which kind of makes him look a bit like a one-eyed scarecrow. As everyone who watches slasher flicks will know, a good slasher needs plenty of blood and gore and inventive kill scenes. Sadly, though, although this film does have some good murder scenes, it is relatively bloodless and the kills are all very quick, so it is unlikely to satisfy gorehounds. I don't think that this film was ever cut by the BBFC, but I think the American MPAA had a field day with it, as well as the other Friday The 13th films and these have never been available completely uncut in this country before. You would think, in these days of relaxed censorship, that now would be the ideal time to release the uncut versions, but apparently Paramount don't feel the same way. Anyway, this is an okay slasher flick, but nothing more, though I would recommend it to fans of the series or 80s horror in general. However, Part 3 was even worse. The acting is not too bad in this film, either, unlike some of the others in the series. Two stars from me, for this watchable but far from classic film.
Read more
2 people found this helpful
Report abuse

s.fallout
5.0 out of 5 stars PACKANACK LODGE
Reviewed in the United Kingdom on April 16, 2015
Verified Purchase
This is the R1 print of Friday the 13th pt 2.
It's the widescreen deluxe edition & the
picture quality is quite nice. Said picture fills
all the screen on a modern TV, so "sack boy"
(he hasn't found his hockey mask just yet)
has grown up, but he really doesn't look that
imposing. As we all know, he becomes "proper Jason"
in pt 3. Another bunch of teens go messing where they
shouldn't be messing, and we get to see the results.
Some decent fx & you have yourself a great Friday flick.
Not watched extras yet, but here's whats on the back of
the box: Inside Crystal Lake memories, Fridays Legacy: Horror
conventions, Lost Tales from the camp pt2 (pt1 is on first film),
Jason Forever. The special features are 'not rated'.
The looong flashback takes the pi$$. R-rated 86mins.
1981 a smashing year
Read more
2 people found this helpful
Report abuse

Mike
2.0 out of 5 stars Same as the first...a liiiiittle better
Reviewed in Canada on April 22, 2003
Verified Purchase
Nothing special bout the movie...still like the concept, but the movie is still boring to me. I'm not at the edge of my seat except for a part or two. Pretty bad, but if you liked the first (which i don't know how you could) than I'm pretty sure you'll like this one.
Read more
3 people found this helpful
Report abuse

MR JAMES GREAVES
5.0 out of 5 stars this product is well worth the money
Reviewed in the United Kingdom on November 5, 2019
Verified Purchase
this product is exactly as the seller described it is fantastic.
Read more
Report abuse
See all reviews