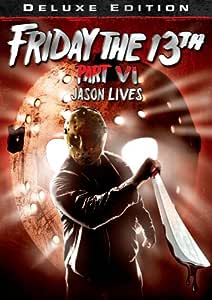 Jason rises from the grave to wreak havoc upon a new group of unsuspecting campers in the ultra-bloody rampage Friday The 13th: Part VI: Jason Lives - Deluxe Edition. As a child, Tommy Jarvis killed mass-murderer Jason Voorhees. But now, years later, he is tormented by the fear that maybe Jason isn't really dead. Determined to finish off the infamous killer once and for all, Tommy and a friend dig up Jason's corpse in order to cremate him. Unfortunately, things go seriously awry, and Jason is instead resurrected, sparking a new chain of ruthlessly brutal murders. Now it's up to Tommy to stop the dark, devious and demented deaths that he unwittingly brought about in this terrifying horror film that will take you to the grave and back!

4.5 out of 5 stars
4.5 out of 5
699 global ratings
How are ratings calculated?
To calculate the overall star rating and percentage breakdown by star, we don’t use a simple average. Instead, our system considers things like how recent a review is and if the reviewer bought the item on Amazon. It also analyzes reviews to verify trustworthiness.

Max Freeman
4.0 out of 5 stars This is an important movie. I know that sounds ridiculous, but bear with me.
Reviewed in the United States on September 13, 2017
Verified Purchase
This movie is, more than any other film, the true birthplace of horror-comedy. We wouldn't have had the Scream franchise without this movie. This is the moment the horror/slasher industry looked at itself and said "you know what? this is kind of silly." The scares are still there, but overall it's a comedy, where teenagers are slaughtered more for laughs than screams. Other movies tried before (Rocky Horror Picture Show, Student Bodies), but always leaned far more comedy than horror. This is the first time a mainstream slasher movie learned to laugh at itself, while still being a legitimate R rated horror movie. It's not perfect, as there are pacing issues, including way too much time spent with a skeptical sheriff, but overall it's a great, funny, thrilling film.
Read more
15 people found this helpful
Helpful
Report abuse

Madd.Sweet
5.0 out of 5 stars Love this movie!
Reviewed in the United States on February 22, 2017
Verified Purchase
This is my favorite Friday the 13th movie ... by FAR! I remember when I was a little kid, my mom made me take catechism classes on Saturdays ... SATURDAYS!! That was worse than detention in my humble opinion. I would get up, take a shower, get dressed, she would make me breakfast and then hand me 5 bucks. I would walk to class, and wait for what seemed to take ALL DAY! Then, the best part of my Saturday afternoon was walking back home. Because there was a video store on the way home. I would go in, grab this movie and a 2 dollar large bag of generic cheese puffs. Hand over my 5 bucks, then walk home and watch this movie. Don't get me wrong, I would rent others as well. But this movie and The Kindred are still to this day my favorites!

Anyhow, my favorite line in this movie has always been by those 2 little douche bag kids, when they are hiding under the bed ... "So what WERE you gonna be when you grew up?"

Providential
TOP 500 REVIEWERVINE VOICE
1.0 out of 5 stars Dumb
Reviewed in the United States on October 25, 2020
Verified Purchase
This movie is so dumb I had to fast-forward some scenes just to finish it. That's after mostly enjoying the first 4-5 in a marathon over a few days. This movie is notably dumber and worse than other entries, and for me marks a bad era in horror filmmaking. People gave up on making real movies and just cranked out awful, cringey garbage with the excuse of, "well the original movies were bad too". Here's a thought - if you think the original movies are bad, you don't like that kind of horror movie. Deep thoughts, I know. I think the first few movies are pretty decent, and this isn't.

Some people say part 6 is "comedy". If you think bad actors talking with bad accents screaming bad dialog is laugh out loud funny, then you'll love this movie. You can always tell when "jokes" are happening because people are screaming or talking really fast or mugging directly at the camera. It's absolutely stupid. You might as well play a laugh track at random times of the day and call that humor.

So some completely unrealistic characters, who are all awful ignorant people, get killed in ridiculous ways. Yawn. Oh and a lady says curse words and her boyfriend is dumb and then the camera cuts to a scene made for the trailer. Clearly hilarious. Sigh.

The great music of earlier movies is gone. The music is on the level of bad TV after-school specials back in the day, save for a few rock tracks made to sell soundtrack albums.

The directing is also awful. The first two shots of the film are clearly reused stock footage, then the third shot is something unique. Hey, director. Here's a trick. Use the good shot first. I'll take a check for $1million please thanks.

There's no setup, there's no tension. This is a garbage movie made by people who don't think very highly of their audience.

Here's a quick example. In the opening of the film a character is digging up Jason's dead body and stabbing it with a spike. This doesn't seem smart but fine. Then a lightning bolt hits the spike. That's a little too Dr. Frankenstein for me but I'll give the movie that. Then the character comes back and thoughtfully pulls the stake out of Jason's body. Why? Why would this character do that? The only reason, is so Jason can stand up without a spike though him. But why? Jason could just stand up and pull the spike out himself. The only reason the character pulls the spike out, seems to be, that the character is too stupid to live. At least that's my read. So now I don't care if this guy dies. Sadly, this character is the hero. It's the opening of the movie and I'm already completely done with caring about the hero. That's a bad start. The movie just limps all the way home from there.

Gaps in logic. Awful characters you're not invested in. Horrible music. Bottom basement direction. There's nothing redeeming about this movie, even as a rental.

Give me $3milllion and the same camera crew, and I could direct a better movie.

Blane R. Schippers
2.0 out of 5 stars Boring
Reviewed in the United States on January 30, 2019
Verified Purchase
I love horror but have never been a fan of Friday the 13th movies because the characters are usually one dimensional and Jason himself is pretty boring. Some of the kills are fun but that's about it. I was hoping this one would be a little better because I tend to enjoy some humor in my horror and was told Jason Lives has a little more humor. Well, it does but it's still pretty bad. Very poor acting. Jason is still really boring. The kills in this one are just okay. The characters are bland and one dimensional. I just couldn't get into it. I know people love this series but personally I just can't get into it. I will end up selling this one. Watching it once was enough.
Read more
3 people found this helpful
Helpful
Report abuse

WEAK HEART 4 LIFE
1.0 out of 5 stars WOW FROM HORROR TO COMEDY...
Reviewed in the United States on July 16, 2020
Verified Purchase
THEY SHOULD BE ASHAMED CALLING THIS A FRIDAY THE 13TH FILM. I KNOW THE FILM MAKERS WERE GOING FOR A FUNNIER SIDE OF THE STORY THIS TIME BUT REALLY? OKAY THIS TIME TOMMY JARVIS RETURNS YET AGAIN OUT FROM THE MENTAL HOSPITAL AGAIN WE NEVER DO FIND OUT IF HE KILLED PAM AT THE END OF PART 5. NO PART 6 STARS WIITH TOMMY AND HIS FRIEND GOING TO A CEMETARY TO DIG UP JASON!! WHY BECUASE TOMMY WANTS TO BURN HIM BY POURING GAS ALL OVER JASON AND SETTING HIM ON FIRE BUT FIRST HE MUST DIG HIM UP TO CREMATE HIM. REALLY?! AND THIEN WHAT HAPPENS JUST WHEN TOMMY IS ABOUT TO BURN JASON IT STARTS TO RAIN OF COURSE. TOMMY TAKES A METAL FENCE POST IN JABS IT IN THE DEAD JASON CORSPE. THEN WHEN HE IS ABOUT TO BURN HIM YOU GUESSED IT STARTS TO RAIN AND A BOLT OF LIGHTNING STRIKE THE CORSPE OF JASON BRINGING THE DEAD MAN BACK TO LIFE YET AGAIN. THIS MOVIE IS NOT SCARY I GUESS IT IS SUPPOSE TO BE A COMEDY BUT I DID NOT KNOW IF I SHOULD LAUGH OR CRY AT THE ACTORS TRYING TO ACT SERIOUS AND SPAEKING CORNY DIALOGUE.
Read more
Helpful
Report abuse
See all reviews

Ian Williams
3.0 out of 5 stars High expectations confounded.
Reviewed in the United Kingdom on December 12, 2009
Verified Purchase
I've read quite a few reviews of this movie and the general impression I got was that it just might be the best of the series. However, as I've only seen Jason X (and loved it), I can't really comment on that except to say that if it is the others must be pretty bad.

Not that Jason Lives was bad, more a film of two halves. The first half was a horror comedy with lots of nice touches. "I've seen too many horror movies not to know that a man in a mask is not going to be friendly," says one soon to be victim. Or the gravedigger, on seeing Jason's open grave, turns to the camera and says knowingly, "The things some people consider entertainment." Then there's the encounter with a paint balling group on a team building exercise and taking it very seriously. This is all good witty stuff.

Alas the second half is more the routine the stalk and slash which not even the unexpected severed head gag can raise above the ordinary. It's all competently done, though much of the actual killing is off-screen and relatively tame, but the horror-comedy section is definitely the best part.
Read more
Report abuse

Mrs. N. G. Yandle
5.0 out of 5 stars Life-saver!
Reviewed in the United Kingdom on February 3, 2010
Verified Purchase
My son looked everywhere for this particular DVD, if only he,d come to you first! He couldn,t get it anywhere and he is so pleased that he finally has the complete collection. He rates it very highly,you made his day! Thank you very much.
Read more
2 people found this helpful
Report abuse
See all reviews