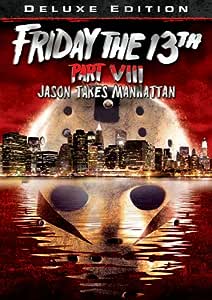 After an electrifying return from the bottom of his Crystal Lake grave, indestructible psycho-slasher Jason Voorhees ships out to visit the Big Apple and paints the town red! High school senior Rennie Wickham is in for the ride of her life - and possibly her death - when she and her classmates take a graduation cruise bound for New York City. Little do they know that crazed serial killer Jason is a stowaway who quickly transforms the teen-filled "love boat" celebration into the ultimate voyage of the damned! Only a few survivors reach New York, where the bloody rampage spills into the gritty streets and subways of Manhattan in a deadly game of hide-and-seek - leading to a toxic confrontation with Jason for one last, final time.

4.2 out of 5 stars
4.2 out of 5
760 global ratings
How are ratings calculated?
To calculate the overall star rating and percentage breakdown by star, we don’t use a simple average. Instead, our system considers things like how recent a review is and if the reviewer bought the item on Amazon. It also analyzes reviews to verify trustworthiness.

Samantha
2.0 out of 5 stars This is a group review
Reviewed in the United States on December 12, 2020
Verified Purchase
Christian- This movie is false advertising. Jason barely went to Manhattan. Two and a half stars out of five.
Sam- That felt like a super long hour and a half of my life that I'll never get back. Two stars out of seven.
Di- It had a lot of plot threads and character stories that started but didn't go anywhere because Jason murdered them. Overall pretty good. Three and a half stars out of five.
Jacin- I only watched fifteen minutes of this movie. However, missed an opportunity for teenage mutant ninja turtles crossover. Deduct points for that. However, dogs not dying is ten out of ten. So overall, I'd say seven out of ten.
Julia- They didn't even get to Manhattan until the last thirty minutes and then that wasn't even good until the last fifteen minutes. Zero stars.

WEAK HEART 4 LIFE
1.0 out of 5 stars DUMBEST FILM OF THE FRIDAY THE 13THS
Reviewed in the United States on July 20, 2020
Verified Purchase
OKAY FIRST OFF THIS MAKES NO SENSE. AT THE END OF PART 7 JASON WAS SUPPOSEDLY FINISHED OFF NOW ALL OF A SUDDEN HE IS IS MANHATTEN WE NEVER LEARN HOW HE GETS TO NEW YORK OTHER THAN HE SUPPOSEDLY SWAM DOWN RIVER AND SOME HOW GOT ON THE SHIP??!! AHH ..WHAT ?? JASON KNOWS HOW TO SWIM NIOW? WHAT DID HE TAKE SWIMMING LESSONS? I THOUGHT ACCORDING TO THE FIRST FILM HE DROWNED!! NOW HE CAN SWIM?? AFTER BEING SET ON FIRE AT THE END OF PART 7?? ALL I CAN SAY IS PARAMOUNT SHOULD HAVE STOPPED WHILE THEY WERE AHEAD. DUMB DUMB FILM!!
Read more
One person found this helpful
Helpful
Report abuse

Music Unheard
1.0 out of 5 stars Should be titled “Jason the stowaway on a dirty fishing boat!” only 30 Min in NYC!
Reviewed in the United States on April 28, 2019
Verified Purchase
No real spoilers in this review for its a Jason movie and more jason movies follow, and with that said. This is a 95% garbage movie! Very Bad, with a very false title! This Movie is about 1 hour and 30 minutes long with just over 1 hour of the movie taking place on a dirty boat (Not in NYC). A dirty fishing boat the director (small d) tries to pass off as a cruise ship. Only the last 30 minutes take place in the fake NYC. Jason take Manhattan has about 5 minutes in actual NYC. Jason's powers to teleport or run like lightening when off camera is in full gear in this 1-star curiosity. I sludge through this waste of a movie because the title sounded fun and I want to complete the F13 run (Capital F, and not for Friday or Fudge). So far this Movie was the most painfully bad and the hardest to watch of the F13 movies! Good Luck! Should you wish to Journey with “Jason the stowaway on a dirty fishing boat!”.
Read more
3 people found this helpful
Helpful
Report abuse

HorrorFanLA
1.0 out of 5 stars The Worst In the Series By Far....
Reviewed in the United States on January 30, 2020
Verified Purchase
I can't stand this film. It's not even campy like the others - it's just plain bad. It feels like it was written by some fan whose ideas consist of radioactive waste and letting Jason stand there while some high school kid punches him 30 times.

The deaths in this film are a joke and are substandard to the other Friday the 13th films. Absolutely embarrassing and a waste of film.

Avid reader
TOP 1000 REVIEWER
2.0 out of 5 stars What is the point?
Reviewed in the United States on April 23, 2020
Verified Purchase
This is a prime example of a movie that has no reason to be made. Nothing really new, and perhaps the only reason to watch it to the end is to see how the Charles McCulloch character meets his end. It seemed like they were really reaching to have a reason Jason was after the main female character. And the ending in the sewer was simply nonsense, for many reasons.
Read more
One person found this helpful
Helpful
Report abuse

todd barts
5.0 out of 5 stars Still love this movie
Reviewed in the United States on January 5, 2018
Verified Purchase
I don't care how much flack this film gets i love it. I have been a fan of The Friday films since i was little renting them from my local video store and this one was rented often. Happy to own the VHS.
Read more
4 people found this helpful
Helpful
Report abuse

J. Hernandez
3.0 out of 5 stars Great to see Friday 13th in HD
Reviewed in the United States on March 20, 2015
Verified Purchase
Great in HD still a average movie at least in the series of Friday 13th. Looks great in HD but that does not make the movie any better. Its still not the worst of Friday 13th but Jason in Manhattan is kind of stretching it a little. I say see it if you don't have much to do definitely watch it, the HD is worth giving it try. This coming from someone who likes slashers and loves to watch horror movies. Its a average movie and in saying that don't expect anything spectacular.
Read more
2 people found this helpful
Helpful
Report abuse
See all reviews

FJY
3.0 out of 5 stars Watchable
Reviewed in the United Kingdom on January 7, 2018
Verified Purchase
This was the last Friday The 13th film of the 1980s and also the last one made by Paramount, until the 2009 remake. It isn't one of the very best of the franchise, but I have always quite liked it. It looks a bit more expensive and well-made than most of the earlier films in the series and has some quite good, though almost bloodless, kill scenes. Kane Hodder was always my favourite Jason actor and he is as good as ever in this film.

The film is very far from perfect, though. Although the title of the film is Jason Takes Manhattan, he doesn't even arrive there until about halfway through the film and then he doesn't kill anyone who is there. The ending is also very odd and I couldn't understand it at all. This film had, without any doubt, the weirdest ending of the entire series. Anyone who can make sense of it is a lot smarter than I am!

Is this worth buying, if you already have the film on VHS? Well, yes, for a couple of reasons. This version is in widescreen, unlike the old VHS version and is also reportedly completely uncut by the BBFC. This really amounts to nothing more than a very brief 1 second shot of a butterfly knife being unfurled, though and that is all. Apparently, the BBFC had a bit of a "thing" for weapons like that back in the late 1980s, when this film was released. This DVD doesn't contain ANY of the material that may have been cut by the American censors, though. So, don't let that deceive you. The only previously censored material in the UK is the butterfly knife scene and that is all.

So, to sum up, this film is worth buying for Friday The 13th fans and horror completists, but I doubt that anyone else would enjoy it very much. As I said, it is no classic. It IS, however, much better than the Jason Goes To Hell, which followed this in 1993. That was the first Jason film made by New Line Cinema. Pity that it wasn't the last...

The Shape 78
3.0 out of 5 stars Friday the 13th Part 8
Reviewed in the United Kingdom on October 28, 2017
Verified Purchase
I remember watching Jason Takes Manhattan when it first came out and thinking it was just awful, but after watching it recently i took it for what it is. I liked the thought of Jason leaving Camp Crystal Lake to massacre as many yanks as he could, but most of the killings happened on the boat, which was a bit disappointing, but saying that the killings are great and you do see a lot of Jason, but in truth this is a god awful film, but as am getting older i love the 80's slice and dice movies.
Read more
4 people found this helpful
Report abuse

Ms. Sl Hole
4.0 out of 5 stars Best of the Worst
Reviewed in the United Kingdom on January 16, 2018
Verified Purchase
This is a low-ranking Friday film, but still very entertaining.

Major problems include a boat getting out of a lake and sailing to New York, teleportation, the majority of the film being on a ship instead of in Manhattan, and a daft ending.

On the plus side the ship setting actually makes for a nice change of scenery, and there are some memorable kills along the way.
Read more
Report abuse

Archie Douglas-Hamilton
2.0 out of 5 stars Easily one of the weakest in the series.
Reviewed in the United Kingdom on September 26, 2018
Verified Purchase
This is probably the joint worst film in the Friday series and that’s saying a lot because almost all of these films are garbage. The first problem is that Jason is only in Manhattan for about 20 minutes. The kills are pretty lackluster except for maybe the one involving Jason punching a kid’s head off which is pretty entertaining. This could have been a lot better but at least Kane Hodder is playing Jason and that gives the film some redeeming qualities.
Read more
Report abuse