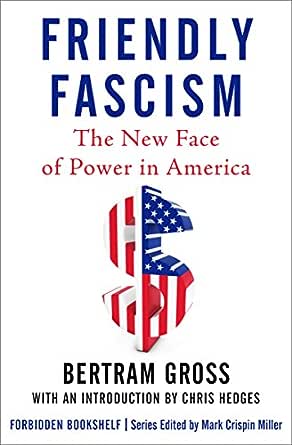 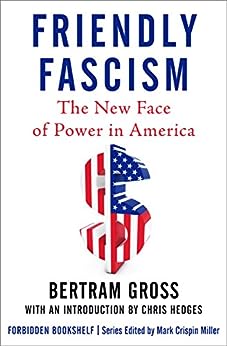 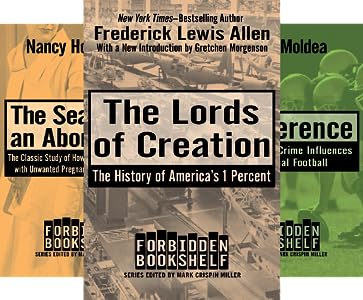 “This is the best thing I’ve ever seen on how America might go fascist democratically. Friendly Fascism offers a very clear exposition of where America is, and how we got there.” —William Shirer

“At a time of escalating political uncertainty, when the forces of totalitarianism threaten once more to crawl out of the American woodwork, Friendly Fascism is a powerful tool—better yet, a weapon—that can help us avert a distinctly unfriendly future.” —Alvin Toffler

Bertram Gross (1912–1997) was a social scientist, federal bureaucrat, and professor of public policy and political science. During the Roosevelt and Truman administrations, he served as an advisor in the areas of public housing, wartime price controls, small business, and post-war planning. He was the major architect of the original full-employment bills of 1944 and 1945, and of the Employment Act of 1946. The Campaign to Abolish Poverty/Full Employment Coalition now presents the annual Bertram Gross Award in his honor. While working on legislation in Congress and the president’s office, he wrote The Legislative Struggle: A Study of Social Combat, which won the American Political Science Association’s Woodrow Wilson Prize. Gross contributed to a variety of publications, including the New York Times and Social Policy, where his first piece on Friendly Fascism appeared.

4.4 out of 5 stars
4.4 out of 5
77 global ratings
How are ratings calculated?
To calculate the overall star rating and percentage breakdown by star, we don’t use a simple average. Instead, our system considers things like how recent a review is and if the reviewer bought the item on Amazon. It also analyzes reviews to verify trustworthiness.
Top reviews

Retired USAF
5.0 out of 5 stars Friendly (?) Fascism
Reviewed in the United States on January 18, 2017
Verified Purchase
About 1/4 way into the book. It is particularly scary with what will be happening with the inauguration this Friday (20 Jan 2017). People need to understand that fascism is an economic theory where business runs the government, but Nazism was the social/political method that sprang up to implement this theory. (Conversely the theory that government should run business...socialism...was implemented by the communistic social/political methodology.) Fascism, in its own right, does not demand ultra-nationalism, imperialism nor the suppression of the population, but it does lend itself towards it when power and money are concentrated in so few people. That club that can be formed can permeate the entire fabric of the nation. That this was originally written in 1991 (Reagan), was a reflection of the concerns in that era. However the intervening political flow of more and more power and more and more status to big business (Supreme Court rulings of, first, "personhood" for big business and then ability of this newly-acknowledged class of "people" to legally insert virtually an unrestricted amount of money into political campaign is a logical evolutionary manifestation of the seeds planted in the early 1990's bearing their expected fruit.) "...'When and if fascism comes to America it will not be labeled ‘made in Germany’; it will not be marked with a swastika; it will not even be called fascism; it will be called, of course, ‘Americanism' ' – an uncredited New York Times reporter covering Halford E. Luccock in an article published September 12, 1938. ..." The concerns were real then, in the 1930's; equally in the 1990's, from Gross' book and should be equally today, as Trump and his cabinet of billionaires take control of the country.

CLB in Syracuse
3.0 out of 5 stars Especially Relevant in Today's Political Climate
Reviewed in the United States on October 17, 2018
Verified Purchase
Not the best writing style. First 1/3rd of book is difficult to read but the other 2/3rd's is fascinating and I find myself nodding my head in in agreement. Is easier than you think to lose what freedoms you have!!
Read more
7 people found this helpful
Helpful
Report abuse

Vincent M. Maysee
5.0 out of 5 stars excellent and eye opening
Reviewed in the United States on October 20, 2019
Verified Purchase
Mr. Gross has illuminated my suspicions regarding the current political climate in America today. We, as a nation, are headed toward irrevocable disaster and the only hope is the dissenters who say enough is enough!
Read more
3 people found this helpful
Helpful
Report abuse

Laurie G
4.0 out of 5 stars Very good
Reviewed in the United States on September 14, 2019
Verified Purchase
I have been searching for this book for a few years now. This book was in very good condition, marked as good.So I am very happy! Very timely read also!!!!!!!!!!!!!!! Packaged well and arrived safely!
Read more
3 people found this helpful
Helpful
Report abuse

Bryon Biesman
5.0 out of 5 stars Learn something
Reviewed in the United States on September 26, 2018
Verified Purchase
Everyone should read this book
Read more
5 people found this helpful
Helpful
Report abuse

Richard R. Rye
5.0 out of 5 stars We have learned NOTHING!
Reviewed in the United States on September 24, 2013
Verified Purchase
Sad to say, Gross's predictions and warnings have joined those of the distopian novelists; they have been taken as a roadmap, not a warning. We are closer than ever to becoming the world's worst state.
Read more
27 people found this helpful
Helpful
Report abuse

Barron Laycock
HALL OF FAME
5.0 out of 5 stars Prophetic Book Considers Effects Of Rise Of The Power Elite!
Reviewed in the United States on July 27, 2003
Verified Purchase
I lost my trusty old `dogged-eared' copy of this wonderful classic in a house fire a couple of years ago, and only recently found a used hardcover copy at the wonderful independent bookstore in Peterborough; The Toadstool Bookstore. Considering how relevant the book is to events transpiring in this country now, it was a fortuitous discovery. This is a relatively short but extremely cogent and well-argued treatise on the rise of a form of fascistic thought and social politics in late 20th century America. Author Bertram Gross' thesis is quite straightforward; the power elite that comprises the corporate, governmental and military superstructure of the country is increasingly inclined to employ every element in their formidable arsenal of `friendly persuasion' to win the hearts and minds of ordinary Americans through what Gross refers to as "friendly fascism".

For anyone familiar with modern social theory, it is apparent that the author's thesis is a quite clever and accurate extension of sociologist C. Wright Mills' well known notions of what came to be known as the `mass society' theory. This was an essential aspect of Mills' famous theory of the power elite as forwarded in a book with the same title. Like social theorist G. William Domhoff ("The Higher Circles"), Professor Gross shows how the deceptively friendly and engaging style of the powers that be actually constitute an increasingly dangerous threat to the democratic process and to the long-term survival of our precious civil liberties. Of course, for Americans used to the association between the term `fascism' and the image of angry totalitarian states such as Nazi Germany and the Italy of the same period of time, it is perhaps difficult to associate with the notion that clever and systematic manipulation of the general population through use of the mass media is a form of fascistic influence. Yet, as Gross argues so persuasively, that is exactly what it is.

The term that pops to mind is that process that M.I.T. scholar Noam Chomsky would refer to as "manufacturing consent", a dangerous propensity which dangerously influences the perceptions of individual citizens by continually immersing the populace in an electronic stream of messages, both blatant and subliminal, that serves to condition them to a particular way of experiencing, participating, and perceiving the world around them. We find ourselves constantly bombarded by powerful and suggestive images, message-laden icons which deliver consistent themes regarding the nature of the environment we are living in, one we come to employ more and more exclusively as our preferred method of interacting in both the civil and legal aspects of contemporary society.

As Professor Gross so prophetically forecasted, the mergers of all commercial news sources, both electronic and other, have come under the ownership and control of corporate America, one of the leading edges of the power elite. Amazingly, all of this also rings a responsive chord with the single most prophetic work of fiction in the 20th century, Aldous Huxley's "Brave New World". Lost in our petty diversions and self-absorbed in a pool of trivial pursuits, we become increasingly more vulnerable to the solid wall of subliminal and other messages all conveying a message regarding he nature of the world and our social, economic, and political place in it.

As our experience with the several successful Presidents ranging from Ronald Reagan to George W. Bush, the artful use of personal charisma to cover a mean-spirited political agenda has worked amazingly well. In the twenty years since the book was originally published, many aspects of our collective socioeconomic well-being have been profoundly changed, almost exclusively to the favor of the rich and well placed and to the increasing detriment of the average man and woman on the street. The statistics available are overwhelming in detailing the levels to which ordinary citizens have been stripped of most of the socioeconomic gains of the last century. In every area of contemporary life, from the cost and extent of health coverage to the responsibility for a variety of aspects such as providing for individual retirements, the vastly expanding future tax liability, and the use of the federal treasury to provide for subsidies to corporate America, the story is the same.

Increasingly we are being manipulated into surrendering our voice in the democratic process and to playing a more limited role as consumers, which the elite evidently sees as our only crucial civic responsibility. As George W. Bush said with a booming voice and a congenial charismatic smile, post 911 Americans just had to get out to do their patriotic duty by once again buying things, to get the economy going once more. Indeed, it is becoming a brave new world. This is a wonderful book, and one that is a great, thought-provoking read. Enjoy!
Read more
152 people found this helpful
Helpful
Report abuse

The author is a former Truman administration official writing in the early 1980's. If you do not see the foreshadowing of Donald Trump on every page, then you aren't paying attention.
Read more
24 people found this helpful
Helpful
Report abuse
See all reviews