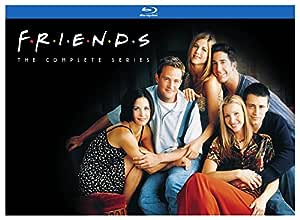 Jennifer Aniston (Actor), Courteney Cox (Actor) Rated:
NR
Format: Blu-ray
4.6 out of 5 stars 728 ratings
Available at a lower price from other sellers that may not offer free Prime shipping.

Friends: The Complete Series is presented via a 1.78:1 1080p/AVC-encoded video transfer; one created by going back to the original 35mm film elements and remastering each season from the ground up. The results, though, vary rather dramatically and give way to a host of minor but, when heaped one atop another, compounding issues. First, let's deal with the original 35mm negatives and the series' original photography. Softness abounds, grain can be unwieldy, and detail is only as revealing as the episodes allow. Friends is classic catalog television, pure and simple. Even in the mid-to-late '90s, the thought of high definition TVs, much less one in every family room, was something of a pipe dream; certainly nothing executive producers felt the need to account for when it came to squeezing the most out of their budgets. Like most shows, it was shot for 1.33:1 standard definition mass consumption and DVD-level scrutiny, nothing more. ("The Pilot" is an even bigger mess. Don't panic.) Remaster or no, Warner Bros. can't turn water into wine, and I have no intention of docking the presentation for its inherited shortcomings. Other more disconcerting problems arise as the series progresses, the worst of which plague the third, fourth and fifth seasons. The majority of these problems could have been addressed with some tweaking, especially since, as it stands, "tweaking" is exactly what caused them to manifest in the first place. Over the course of the show's ten seasons, color and contrast run the gamut (from pleasant and natural to dull and yellowed, to bright and vivid, to overbearing, then steadily back to natural), fleshtones are sometimes muddy or over-saturated, primaries are problematic early on and too vibrant on occasion as the series nears its end, crush hinders shadow detail as black levels bottom out, and intermittent compression artifacts, faint and fleeting as they are, pop up every now and again. Obvious noise reduction is also in play. There are scenes and entire episodes where it's applied with such an uncharacteristically heavy hand that it wreaks havoc on midrange shots and numerous closeups. Other digital techniques have been used to normalize and stabilize aspects of the series' 236-episode photography too; just none that lead to nearly as many mishaps.

All that being said, I'll be the first to admit -- and celebrate -- the fact that Friends has never looked better than it does here. Colors may be uneven when accelerating from season to season, but they're also lovely and satisfying overall, particularly in later seasons as the series barrels into the 21st century. Contrast becomes more consistent too, as does delineation and detail. In early seasons, when edge definition and fine textures deliver, it's in spite of everything that's working against them. Later, edges and fine textures deliver in conjunction with the rest of the image, as clarity becomes more generous and impresses accordingly. The series' grain, meanwhile, ranges from mild to heavy, with stops at muddled and soupy in between, but never becomes a sizable distraction. Removing it completely would have been detrimental, so kudos to Warner for sticking with their commitment to the 35mm remaster. (Now if only the noise reduction applied to the image wasn't so unforgiving.) The technical encode is also proficient (barring the aforementioned artifacting, which is thankfully in very short supply). All 200+ episodes are given ample room to breathe and I have yet to notice much, if anything, in the way of substantial banding, aliasing, shimmering, flickering, ringing or film-element damage. Perfect? No. Terrific? Still cold. Great? Getting a wee bit warmer. Good? Worth the cost of admission? There you go. Friends wasn't primed to produce a knockout Blu-ray, and yet its video presentation is arguably the highlight of the set. How's that for a conundrum? In the end, reasonable fans will be pleased, videophiles will grumble, some will think I'm being far too kind, and still others will think it all looks better than reviewers are giving it credit for.

The Complete Series doesn't include any lossless audio option, putting all of its faith in a solid but by no means ideal 640kbps Dolby Digital 5.1 surround track. Just don't rush to jump to any conclusion. It isn't the track's lossy nature that spoils things. I'll even go so far to say a lossless mix wouldn't have improved the discernible quality of the ensuing sonics all that much. (Key word: discernible.) No, the real problem here is that the show's unexpectedly full and energetic sound design could have used further remastering and adjustment, as several lingering issues bring it down half a notch. While matters indeed improve over the course of Friends' ten seasons, everything from air hiss to distortion, errant noise and other flare-ups interfere with dialogue, effects and live studio audience outbursts; things that could have been eliminated or at least minimized had the audio been given more attention.

That doesn't mean the Dolby Digital track is a misfire or a loss. Far from it. Distractions creep in, sure, but the finer qualities of the mix shouldn't be so readily dismissed. Voices are largely bright, clear and intelligible, prioritization is savvy, LFE output is decidedly decent (albeit rarely pushed to any extreme), the rear speakers are quite active, and dynamics get the job done. Music and ambience are better than average too, pans and directionality were more satisfying than I anticipated, and I was continually surprised by the relative immersiveness of the otherwise stock sitcom soundfield. There's still a general thinness inherent to most episodes, the studio audience laughter often sounds canned, and further remastering work could have possibly brought earlier seasons more in line with later seasons. But as catalog television goes, it could have been a lot worse.

All the laughs, all the loves, all the lattes - all yours! Settle in with the hilarious and acclaimed series about a family based on friendship. Rachel, Monica, Phoebe, Joey, Chandler and Ross were always there for each other. Now they're here for you in the complete 10-season set of the original broadcast episodes. Special features include hilarious gag reels, The Rembrandts - "I'll Be There For You": Official music video and much more!