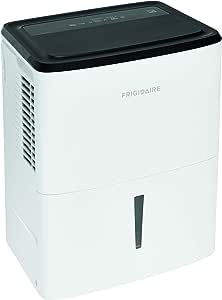 Quick and reliable in any damp space, the Frigidaire Energy Star 22-pint dehumidifier is effective in keeping attics, basements, bathrooms, and garages dry. Frigidaire’s 22 pints-per-day dehumidifier is capable of continuous operation when the unit is located near a suitable low-level drain. It features full-function electronic controls, an easily accessible collection container with level indicator, and a washable filter. Its Effortless Humidity Control allows you to control the exact percentage of humidity in your room. The SpaceWise portable design includes a top handle, integrated side handles, and caster wheels making it convenient to move your unit from room to room.

3.9 out of 5 stars
3.9 out of 5
23 customer ratings
How does Amazon calculate star ratings?
Amazon calculates a product’s star ratings based on a machine learned model instead of a raw data average. The model takes into account factors including the age of a rating, whether the ratings are from verified purchasers, and factors that establish reviewer trustworthiness.

A Customer
1.0 out of 5 stars I guess all of these things are junk
Reviewed in the United States on July 1, 2020
Size: 22 PintVerified Purchase
I've had 3 different dehumidifiers now. This one isn't great either, for a few reasons.

This is the kind with the optional hose output sticking out the back, and with a knob-style cap screwed onto it for normal bucket-collection use. I've seen a lot of reviews complaining about leaks from the cap, so I looked at it and oh boy is it not a quality device. Bear with me, it's hard to describe. First, the edge of the output tube the cap screws against is slightly rough, which is the wrong way to make something which has to fit against a watertight gasket (which is in the cap). Second, the gasket is a thick ring shape, with a hole in the middle. If it were a solid disc, just the contact between it and the thin edge of the output pipe would have to fit tight into the rubber to form a seal. But with the hole in the middle, it also has to be tight enough to seal the flat gasket against the inside of the cap. THIRD, the front side of the gasket isn't even flat! It has some kind of raised part number characters sticking out, so again you have to put it on extra tight to make sure the non-flat rubber seals against the pipe.

If you run it on "continuous" mode, the 2-digit number display turns into a "CO" and NO LONGER FUNCTIONS AS A HUMIDITY METER. The panel has no mode button and therefore no light to indicate the mode (continuous mode is accessed by clicking the auto level all the way down until it shows CO), so they hijack the humidity level display to show it. So if you want this thing to run continuously, you will have to buy a separate humidity meter in order to monitor the humidity level.

The fan is noisy, even on the lowest setting, in a slightly pulsing way, not just a loud woosh but an annoying up and down volume. I looked into the vent, and the fan cylinder (it's the type made up of dozens of long straight thin parallel blades arranged in a cylinder shape) wobbles as it spins. Junk. The compressor part itself doesn't seem much louder than a much weaker model I recently had, it's all the crummy fan. And in addition to being annoying, I have to wonder if this poor balance will shorten the life of the parts.

The collection bucket was poorly assembled from the factory. It consists mainly of 2 parts, the large white bucket and a clear lid which prevents re-evaporation. The lid is not supposed to be removable (the handle assembly makes this impossible), but it wasn't fully snapped in place. Easily fixed, but a sad statement.

There are so many of these things under different brand names. There are more brands of dehumidifiers here than there are flavors of ice cream or soda at a grocery store. It's ridiculous, and they are all junk for various reasons not directly related to the most expensive core technological component. There is no particular reason to get this one. I tried this one because it's a "real" brand, but it turns out it's just another piece of trash.

Deborah Wheatley
4.0 out of 5 stars Works well, but not as good as older Frigidaire model
Reviewed in the United States on July 7, 2020
Size: 22 PintVerified Purchase
I bought this because it was a really good price, and because I already owned a Frigidaire dehumidifier model that works amazingly well. I do no like this model as much as the previous one, but given the price, it's worth keeping.

I have had no problems with leakage, though I do not use a hose to drain it, I simply empty the bucket when it's full
Here as some pros & cons

Pros:
- sleeker design than previous model
- quieter fan
- 3 fan speeds (vs 2 on previous model)
- price, I paid $149
- easy to clean filter
- bucket is easily removable
- Flat top if you want to place anything on it...I put a fan on top of mine

Cons:
- doesn't pull as much moister from the air as previous model
- air intake in the back, so it cannot be placed up against the wall like the previous model

I'd recommend purchasing the older version if you can't find it, but this one is also good for the price
Read more

Ashley Huether
5.0 out of 5 stars Efficient
Reviewed in the United States on June 26, 2020
Size: 22 PintVerified PurchaseEarly Reviewer Rewards(What's this?)
I've been using it for about a week now and it has vastly improved my basement humidity. Doesn't smell wet anymore and I'm thrilled. I love that you can hook up a hose to it and run it continuously or to a chosen humidity level. Different fan speeds, the highest is a little noisy, but not to a point that I would find bothersome. Easy to move around if needed also.
Read more
6 people found this helpful
Helpful
Comment Report abuse

TimCliff
5.0 out of 5 stars Happy with my purchase
Reviewed in the United States on June 29, 2020
Size: 22 PintVerified PurchaseEarly Reviewer Rewards(What's this?)
I was a little nervous to try this out since it didn't have many reviews, but decided to try it out. I received it a few weeks ago and am very happy with it. It was factory sealed in the original packaging, and has been taking about 1.5 gallons of water out of the air each day.
Read more
5 people found this helpful
Helpful
Comment Report abuse

Gumby
5.0 out of 5 stars Works better than I expected
Reviewed in the United States on July 9, 2020
Size: 22 PintVerified Purchase
I'm using this in a 700 square foot detached garage with a classic car stored in it. It runs great and make a very noticeable difference in the humidity. I can work in the garage now with a fan running and feel very comfortable.
Read more
One person found this helpful
Helpful
Comment Report abuse