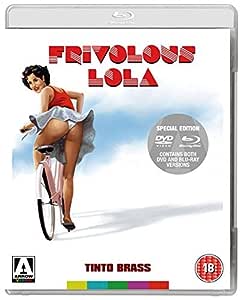 United Kingdom released, Blu-Ray/Region B : it WILL NOT play on regular DVD player, or on standard US Blu-Ray player. You need multi-region Blu-Ray player to view it in USA/Canada: LANGUAGES: English ( Dolby Digital 2.0 ), English ( Mono ), Italian ( Dolby Digital 2.0 ), Italian ( Mono ), English ( Subtitles ), WIDESCREEN (1.78:1), SPECIAL FEATURES: Alternative Footage, Blu-Ray & DVD Combo, Booklet, Interactive Menu, Photo Gallery, Scene Access, Trailer(s), Uncut, SYNOPSIS: This sexy comedy from Italian director Tinto Brass stars Anna Ammirati and Mario Parodi as Lola and Masseto, a young couple about to be married. While Masseto looks forward to deflowering his bride-to-be on their wedding night, Lola is reluctant to betroth herself to him without first ensuring that he will be a good lover. The more Masseto resists her advances, the harder Lola tries to convince him to break tradition and make love before the wedding. Also starring Mario Parodi and Susanna Martinkova, Monella was released in the U.K. as Frivolous Lola. ...Frivolous Lola (1998) ( Monella ) ( Naughty Girl ) (Blu-Ray & DVD Combo)

3.9 out of 5 stars
3.9 out of 5
14 customer ratings
How does Amazon calculate star ratings?
Amazon calculates a product’s star ratings based on a machine learned model instead of a raw data average. The model takes into account factors including the age of a rating, whether the ratings are from verified purchasers, and factors that establish reviewer trustworthiness.
Top Reviews

Phoober
3.0 out of 5 stars Knickers!
Reviewed in the United Kingdom on July 16, 2014
Verified Purchase
I rented this from Lovefilm as I am learning Italian and thought this film looked like it might be quite funny. Yes, it was hilarious in places, but it wasn't what I was expecting at all! It was a bit too pornographic and I got fed up of looking at ladies bare backsides and genitals. I think perhaps this film is more for the men?

The main character Lola (acted by Anna Ammirati) didn't have very much to say and therefore, I don't think the role was too taxing for the actress who only really had to expose her breasts and nether regions, pout a lot, remove her knickers and tease anything in trousers that looked in her direction. It all got a bit tiring after a while and I suppose I couldn't see the point of any of it. There wasn't really a storyline, which would suggest that this was made for mere titillation - not much else.

All in all, it was OK, but, unlike some films which are an experience not to be missed, you wouldn't be missing much if you don't see this one.

Mr Ian B Burgess
3.0 out of 5 stars Three Stars
Reviewed in the United Kingdom on September 5, 2015
Verified Purchase
Starts well but fizzles out, disappointing .
Read more
Helpful
Sending feedback...
Thank you for your feedback.
Sorry, we failed to record your vote. Please try again
Report abuse

david birt
5.0 out of 5 stars If you love female bottoms as I do this is the one for you!!!
Reviewed in the United Kingdom on February 28, 2014
Verified Purchase
Enything by Tinto Brass is just what the doctor ordered for me.I have given this a five star rating because for me its just what the doctor orderd b ecause I love the female form. However on the negative side of things I did not like the misty/ foggy lighting in some of the scenes which is typical of Tinto Brass films. However I am not going to downgrade an otherwise excellent film because of that?The girl Lolo and the model were absolutely gorgeous!!Well worth a purchase.
Read more
11 people found this helpful
Helpful
Sending feedback...
Thank you for your feedback.
Sorry, we failed to record your vote. Please try again
Report abuse

Pedro
1.0 out of 5 stars waste of money
Reviewed in the United Kingdom on March 6, 2014
Verified Purchase
what a load of utter tosh - the first ever, and certainly the ONLY Tinto movie I'll ever be buying!!
Read more
One person found this helpful
Helpful
Sending feedback...
Thank you for your feedback.
Sorry, we failed to record your vote. Please try again
Report abuse
Load more international reviews