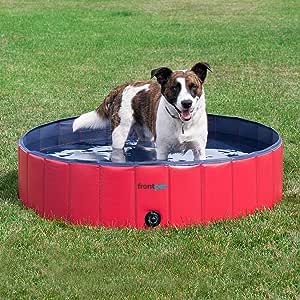 Beat the Heat This Summer With The Front Pet Dog Pool!

Does your dog love being outside?

FrontPet wants to make those hot summer days more enjoyable for your dog!

This is not your standard, plastic, off-the-shelf baby pool. This pool is made for dogs and it's built to last!

Have peace of mind knowing that the pool won't tear or leak, while you watch your pup run and jump in and out of the water!

The pool is 12" deep and 50" in diameter, so large dogs can get completely soaked and cool off while either sitting, standing or lying down in the pool! This dog pool is portable easy to take on the go. When the pool is empty and dry, just fold and pack it up. It's that simple!

Setting the pool up and taking it down is quick and easy. To set the pool up simply make sure the drain plug is closed and then place a running garden hose inside the pool to the desired depth.

When your canine friend is finished playing, or when the water becomes dirty and the pool water needs to be changed, just release the drain plug and let the water empty out. Note, If you do use the pool on a hard surface, it's best to place a durable bottom material, such as a tarp, beneath it for added protection.

Let Your Dog Cool Off and Play

4.3 out of 5 stars
4.3 out of 5
578 customer ratings
How does Amazon calculate star ratings?
Amazon calculates a product’s star ratings based on a machine learned model instead of a raw data average. The model takes into account factors including the age of a rating, whether the ratings are from verified purchasers, and factors that establish reviewer trustworthiness.

Amanda
3.0 out of 5 stars This is an amazing pool for our pups
Reviewed in the United States on July 8, 2017
Size: LargeVerified Purchase
This is an amazing pool for our pups: sadly our 6 month old puppy destroyed the side in seconds. We've tried to duct tape it together and use pool patches but no luck. The inside of the pool is cardboard and once wet it is use less. I'm so sad as the pups loved this pool and was so easy to set up and take down. We have a 60 lb lab/pit mix, 56 lb lab/Shepherd mix and a 45lb Shepherd/Husky mix. All three were able to jump in and out of the pool, dig at the bottom to grab toys with no issues. But it took less then 30sec for our 6 month old to chew the side. Heartbreaking that it feel apart so quick and there is no way to fix it.
Read more
24 people found this helpful
Helpful
Comment Report abuse

Precise DisarrayTop Contributor: Pets
TOP 100 REVIEWERVINE VOICE
5.0 out of 5 stars these pools are great for my two playful but gentle labs
Reviewed in the United States on July 3, 2019
Size: LargeVerified Purchase
I love these pools, and my labs do too!

We actually have two pools of this style- one really big one from another company (64"x12") which we set up in the bigger yard, and I bought this smaller one (50"x12") which is size Large by Frontpet, for placement in a smaller area. I have 2 big labs, and one can fully sit, lay down in this. Two can be in together splashing around. It is a good size without taking up too much space. This pool is sturdy, has a nice drain plug, and is easy to empty. I haven't had to refold it up, so I can't yet comment on that. But I have filled and drained a few times so far.

I want to add that I keep the nails on my two labs trimmed. They don't really dig at the material. I also never ever see them chew on the pool. They are not destroyers. So if you have a dog that seeks to destroy everything in its path, then this is likely not for you.

What I like about it, and what made me purchase it. I simply wanted a pool or two for my dogs. I initially looked at this style, saw some of the negative reviews of horror stories of dogs damaging them, saw the high price, and forgot about it- decided to look elsewhere. So I had gone the cheap route and purchased a huge, large soft sided kid pool for like $10 at a local variety store. It worked out well enough, but it was annoying to clean out (I think I went too large). It was a good starter pool so I could see if my dogs even liked it. If these pools don't work out for whatever reason, I may go back to that annoying but cheap variety. By end of season I just threw it out. Following season, I decided on more cheap toddler pools- the kind that are a molded hard plastic. I went with middle size. I would have gone with the largest, but I didnt think it would fit in my SUV, nor was I sure if I could drain it all that easily. So small ones worked, but my labs couldn't lay down in them. They could step in, but their bums hung over side. At seasons end, one was relegated to becoming a large litter box- my cats think it is a great idea!, and the other as a container for my dogs outside toys. Now into third season, and thinking about what I want.. I revisited these styles of pools. As mentioned, I bought a super sized one (64")from another company- and love it. Then on a whim I decided I wanted another one, but smaller (say 48-50") Other company had a smaller size, but was still pretty expensive (mind as well get another big one).. then I saw this company had the smaller-ish size (50") that I was looking for for, and at a better price. So now I have two pools that are holding up to TWO BIG DOGS jumping in and out, playing as young dogs do. I am enjoying the ease of emptying it and refilling it, moving it around, etc. AND THE POOLS ARE BOTH HOLDING UP. So far so good.

Giving full rating as it is holding up for my needs. But,

IF ANYTHING CHANGES, I will be back to update my review. I am an avid reviewer and I aim to be helpful.
Read more

MNW
1.0 out of 5 stars Poor Quality / Poor Return Policy
Reviewed in the United States on July 12, 2016
Size: LargeVerified Purchase
My puppy girl enjoyed the pool for 2 weeks until I noticed a leak in the bottom of the pool. I found a small tear. I don't know where it came from. The material should be strong enough to handle a dog's paws for only a few sessions in the pool. Have to say I am disappointed in the quality and now it's too late for a return. A company should stand by their product/quality!!
Read more

Amazon Customer
5.0 out of 5 stars Worth every penny
Reviewed in the United States on April 18, 2017
Size: LargeVerified Purchase
I've got 3 large indoor dogs, but they still get a little funky... Professional grooming can be expensive, so I had a hot water option added to my outdoor hose connection so I could bathe them, myself, with warm water, when the weather is appropriate for outside bathing. The trick was finding a tub / pool, sturdy and suitable for them and me. One of them loves bath time, and gets pretty rowdy with the tub. Not only does it stand up to his shenanigans (I'd post a video of him roughing the tub up, if Amazon supported videos, but I'll post a pic), it drains easily, and folds nearly flat when not in use. I highly recommend this product!
Read more

Jan Harris
4.0 out of 5 stars Pet pool
Reviewed in Canada on June 26, 2018
Verified Purchase
great size for our bulldog to enjoy a paddle on a hot day.
Read more
Helpful
Sending feedback...
Thank you for your feedback.
Sorry, we failed to record your vote. Please try again
Report abuse

Page 1 of 1 Start overPage 1 of 1
This shopping feature will continue to load items when the Enter key is pressed. In order to navigate out of this carousel please use your heading shortcut key to navigate to the next or previous heading.
Back
Next
Pages with related products. See and discover other items: dog bath, dog bathing, dog tubs, dogs bath, outdoor dog runs, Best pool rafts for dogs