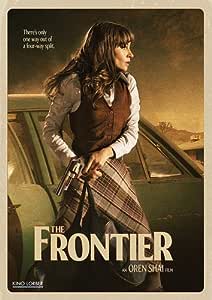 Add to Cart
$22.99
& FREE Shipping on eligible orders. Details
Sold by: Amazon.com
Have one to sell?
Sell on Amazon

Filmed in the California desert on Super 16mm, THE FRONTIER weaves elements of classic noir, American western, and the hard-boiled paperbacks of the 50s to create a timeless world within which the film's colorful characters roam. Shadowy, textured, and wonderfully lush, THE FRONTIER looks like it popped out of the front cover of a gritty paperback novel. A female drifter (Jocelin Donahue, The House of the Devil) discovers a violent gang of thieves at a desert motel run by a mysterious woman (Kelly Lynch, Drugstore Cowboy) and hatches a plan to escape with their stolen cash. An official selection of SXSW 2015, this riveting neo-noir keeps viewers guessing to the last exhilarating shot.

3.4 out of 5 stars
3.4 out of 5
12 customer ratings
How does Amazon calculate star ratings?
Amazon calculates a product’s star ratings based on a machine learned model instead of a raw data average. The model takes into account factors including the age of a rating, whether the ratings are from verified purchasers, and factors that establish reviewer trustworthiness.
Top Reviews

Edward Hourihan
5.0 out of 5 stars I like this movie
Reviewed in the United States on August 2, 2018
Verified Purchase
I love this movie Jocelin you're so gorgeous and I will marry you someday.
Read more
Helpful
Comment Report abuse

J. King
4.0 out of 5 stars Twisty Who Dunnit
Reviewed in the United States on December 11, 2016
Verified Purchase
Acting is so-so--but it has a compelling plot. I liked it--a twisty who-dunnit!
Read more
Helpful
Comment Report abuse

The Movie Man
VINE VOICE
4.0 out of 5 stars Stylish, contains key elements of film noir...
Reviewed in the United States on December 7, 2016
“The Frontier” is an atmospheric crime drama focusing on drifter Laine (Jocelyn Donahue), who discovers a violent gang of thieves at a desert motel run by a mysterious woman (Kelly Lynch) and comes up with a plan to escape with their stolen cash.

This stylish film contains most elements of film noir — a dingy setting, a host of seedy and/or mysterious characters, a woman unafraid to go after what she wants, and a cop whose motives are cloudy. The rough talking dialogue and excellent photography give the picture a kind of retro feel that never seems contrived.

Director Oren Shai establishes the characters mostly through their appearance and some hard-boiled dialogue and wisely allows each member of the cast a few moments to shine. The story is simple. There are a few surprise revelations down the road, but what’s lacking is palpable suspense. Too often, the viewer knows exactly what’s going to happen.

Ms. Donahue is terrific and channels those B-picture actresses cast as leads in noir films of the 40s. Her Laine is attractive, smart, resourceful, and cagey. When she sees an opportunity, she also considers its ramifications before setting her plan in motion.

Bonus features on the Blu-ray release include audio commentary by director/co-writer Oren Shai and co-writer Webb Wilcoxen; interviews with actors Jocelyn Donahue, AJ Bowen, and Jim Beaver; theatrical trailer; and the featurette “8 mm: Behind the Scenes of The Frontier.”

Bruce R. Swicker
1.0 out of 5 stars One Star
Reviewed in the United States on December 16, 2016
Verified Purchase
I wanted to like this movie! I didn't.
Read more
Helpful
Comment Report abuse

Peter S. Bradley
TOP 1000 REVIEWER
5.0 out of 5 stars This is a wonderful revival of noir
Reviewed in the United States on December 11, 2016
Well-done film noire.

Laine is down on her luck, fleeing an abusive boyfriend, when she is helped by the kindly owner of a desert coffee shop. There is quite a collection of nice but slightly off characters hanging around this motel/coffee shop in the middle of nowhere.

But as the friendly Sheriff says "everyone has secrets."

This is a wonderful revival of film noir. The acting was occasionally wooden from some of the supporting cast, and the writing occasionally had a line of dialogue that just clunked, but the plotting was terrific and the movie hummed from start to finish. The acting of the lead actress, Jocelin Donahue, was absolutely first rate.
Read more
2 people found this helpful
Helpful
Comment Report abuse
See all reviews from the United States