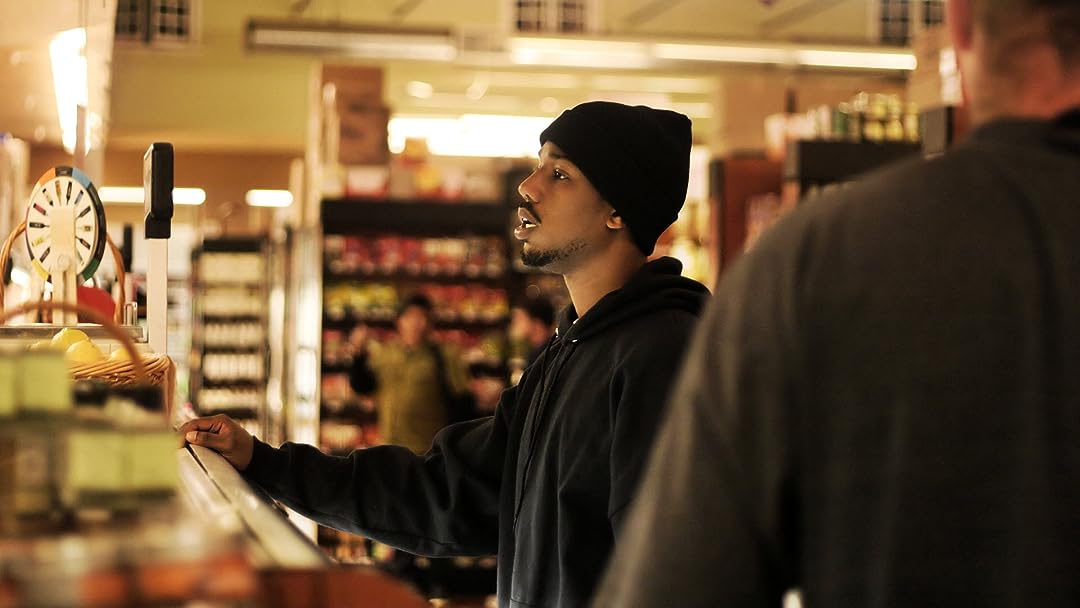 joel wingReviewed in the United States on February 2, 2020
5.0 out of 5 stars
The lives of black men killed by the police have a story behind them
Verified purchase
Having lived and worked in the Bay Area my entire life the story of what happened at Fruitvale BART station in Oakland in 2009 was really heart wrenching. On New Year’s Eve Oscar Grant was killed by a BART policeman who claimed he was grabbing his taser but pulled out his pistol and shot Grant while he was subdued by other officers on the ground. The actual footage of his murder opens the movie. It led to a wave of protests in the Bay Area against police violence four years before Black Lives Matter started.

This was also the first film by Ryan Coogler who came from the Bay and would go on to fame with Creed and the Black Panther.

What Fruitvale Station is about is the day in the life of Grant played by Michael B. Jordan in the last few hours before he passed. He has a girlfriend named Sophina (Melonie Diaz) and a child Tatiana (Ariana Neal). He tries to get his job back at a grocery store, he passes on selling drugs to a friend, he celebrates his mom’s birthday, and eventually, decides to take BART to San Francisco to watch the New Year’s fireworks. There’s also a flashback to when he was locked up.

The point of all this is to show Oscar as a human being not just a news story about another black man getting gunned down by the police. When he talks to his ex-boss for example, he shows how desperate he is to get a job again to support his family. When he was in jail he was caught up in that life and ignored his family. That compares to when he passes on being a dope dealer showing that he was trying to turn a new leaf, but it’s hard because everyone thinks of what he used to do.

It’s a great character study, and one that will pull at your heart strings.
C

john francis leonardReviewed in the United States on January 15, 2014
5.0 out of 5 stars
Real life
Verified purchase
This film was hard to watch because I knew the horrible conclusion. It is heartbreaking, but Michael B Jordan somehow makes it more so with his performance as the flawed hero. He and the director brought to life a young man struggling to overcome his own mistakes and the obstacles our society places in front of young black men from the inner city. I am not one of those young men but this film briefly brought their world to life for me.
58 people found this helpful
Report abuse

SandyReviewed in the United States on March 9, 2019
5.0 out of 5 stars
Great film!
Verified purchase
I knew the ending already but didn’t know Oscar’s story or how it led up to that fateful point at the Fruitvale station. I grew up in the Bay Area in the 90s and am very familiar with BART police. I have to say they had an accurate depiction of a lot of BART officers at the time. Hopefully this incident with Oscar forced them to finally get their act together and better train their security. This movie was sad and made me cry. Very good film.
3 people found this helpful
Report abuse

But questions of possible excessive force remain on the case, and it's timely to watch in light of the Trayvon Martin and Michael Brown and Eric Garner cases. Ultimately the goal of the producer, director and cast was not to vilify but to understand, and the advantage of getting this in DVD is we get to hear their comments in interviews. Includes 2011 Best Supporting Actress Oscar award winner Octavia Spencer as Oscar's mom.
6 people found this helpful
Report abuse

SabrinaReviewed in the United States on September 2, 2019
3.0 out of 5 stars
Missing the digital copy
Verified purchase
The movie itself is very good and shows actual footage of the event that took place. It is very emotional and if your a person who cries in movies then this is one of them.
One thing I was extremely disappointed about was what was offered with the movie which was digital copy. You do get the Blu-ray and DVD but the digital copy is not included, even though it says on the case. When I called customer service they told me that digital copy was not included and I explained to them there was supposed to be one which clearly says on the case. Very disappointing.
Report abuse

MattN_Reviewed in the United States on December 24, 2015
4.0 out of 5 stars
Nicely done
Verified purchase
I was reluctant to watch this film when it came out, because I just assumed it would be "PC Propaganda".

I was wrong. Even if some events are fictionalized, it's pretty much an accurate depiction of the randomness of life and the choices we make in life. It appears that a lot of effort went into interviewing the people he interacted with that last day, and presuming the tale is told accurately, it's very even-handed. There's no sense of "every whitie is prejudiced against the black man"; I mean this is the SF bay area after all. It is, however, a pretty accurate depiction of the lives of lots of people who live here who are not part of the tech scene...

And BART still howls it's soul-rending song to this day, mere blocks from my home... the eeriest sound in the whole region. I wish it had never been built.
Report abuse

NedReviewed in the United States on April 15, 2019
5.0 out of 5 stars
A poignant story w/ simple but gripping storytelling
Verified purchase
Fruitvale Station is not only an unflinching, 360-degree character portrait, but also a hard-hitting, concise, superbly acted film with an emotional experience vivid enough to make viewers feel like they're next to Oscar Grant in his final hours.
2 people found this helpful
Report abuse

deedeeReviewed in the United States on February 17, 2014
5.0 out of 5 stars
Must see film especially for young black men and the people who love them
Verified purchase
I would recommend this movie. The characters were realistic in that the audience was shown the real character for better or for worst. The young man had some issues as he grew up and tried to find himself. We got to see him as a son, a father, boyfriend, a brother, and a friend who is missed by the people in his life particularly his young daughter. I made a point of making my 16 year old African American son watch this movie. Young black men are being killed by white men and the white men are getting away with it. I wanted my son to see this movie in hopes that he can avoid being in situations such as the one these young men found themselves in and if it happens that he finds himself in a similar situation, he will not make a bad situation worse. My son told me after watching this film that he was glad that he watched it.
4 people found this helpful
Report abuse
See all reviews
Back to top
Get to Know Us
Make Money with Us
Amazon Payment Products
Let Us Help You
EnglishChoose a language for shopping. United StatesChoose a country/region for shopping.
© 1996-2021, Amazon.com, Inc. or its affiliates