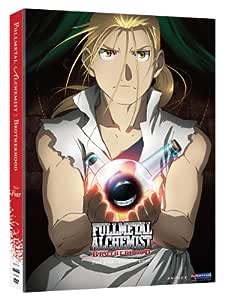 Edward and Alphonse Elric’s reckless disregard for alchemy’s fundamental laws ripped half of Ed’s limbs from his body and left Al’s soul clinging to a cold suit of armor. To restore what was lost, the brothers scour a war-torn land for the Philosopher’s Stone, a fabled relic which grants the ability to perform alchemy in impossible ways.

The Elrics are not alone in their search; the corrupt State Military is eager to harness the artifact’s power. So too are the strange Homunculi and their shadowy creator. The mythical Stone lures exotic alchemists from distant kingdoms, scarring some deeply enough to inspire murder. As the Elrics find their course altered by these enemies and allies, their purpose remains unchanged – and their bond unbreakable.

In the penultimate collection of Fullmetal Alchemist: Brotherhood, the filmmakers begin drawing together the various plots, building to the final confrontation between good and evil. In a flashback sequence, viewers learn the origins of both Hohenheim and his doppelganger, the "Father" of the Homunculi. Hohenheim was once No. 23, a slave of an alchemist in Cselkcess, who created the first Homunculus. When the King of Cselkcess's attempt to achieve immortality backfired, Hohenheim became "a human Philosopher's Stone" and the Homunculus created a body for himself that was a duplicate of Hohenheim's. Decades later, the Promised Day is at hand: "Father" plans to activate the countrywide transmutation circle, killing untold thousands to create an enormous Philosopher's Stone--and activate the "Mannequin Army," a corps of deathless zombies animated by the Stone's power. But even supernatural plans can go awry. Lust was destroyed by Colonel Mustang; Pride, in the guise of Selim Bradley, devours Gluttony. Greed, who took over the body of Prince Ling Yao of Xing, has joined forces with the Elrics; Wrath, a.k.a. Fuhrer Bradley, is missing, leaving Pride, Sloth, and Envy. Pitted against them are an interlocking series of alliances that include the Elric Brothers and Hohenheim; Dr. Marcoh, Scar, and May Chang, with their knowledge of the Alkahestry of Xing; and Colonel Mustang, Alex and Olivier Armstrong, and their loyal soldiers. Director Yasuhiro Irie uses some striking special effects, especially Pride's scissorlike jaws of shadow, to pump up the action. These episodes encompass volume 19 through the first part of volume 23 of Hiromu Arakawa's original manga, and fans of this outstanding series will be waiting impatiently for the fifth set to bring the adventures of Edward and Alphonse Elric to what should be a dynamite finale. (Rated TV 14: violence, grotesque imagery, brief nudity, tobacco and alcohol use) --Charles Solomon

4.8 out of 5 stars
4.8 out of 5
98 global ratings
How are ratings calculated?
To calculate the overall star rating and percentage breakdown by star, we don’t use a simple average. Instead, our system considers things like how recent a review is and if the reviewer bought the item on Amazon. It also analyzes reviews to verify trustworthiness.

Mel ShelTop Contributor: Anime
5.0 out of 5 stars I love this series
Reviewed in the United States on December 27, 2016
Verified Purchase
I love this series! I usually enjoy anime that has physically imperfect people living normal lives and not feeling helpless or depicting them as "special" or "burdensome". Edward Elric is missing his right arm and left leg. He is able to wear auto mail aka metal robot like prosthetics. What could have been a disabling for most has been turned into his greatest advantage in his line of work. Edward's main goal is to get back his limbs and his brother's entire body back to normal. The emotions and actions of the other characters are very real life and not fake or stylized personalities that are only found in anime. *(A caution to some, there are some rather sad/ sadistic like moments that not everyone is comfortable with.There are times when I have to turn down the volume due to intense momentary screaming. There are a few times when children or babies are depicted as suffering momentarily. Also there are some bad words used but I don't think any name is taken in vain if I recall correctly)*
Read more
Helpful
Comment Report abuse

Krissy
5.0 out of 5 stars Fullmetal Alchemist will CHANGE YOUR LIFE. <3
Reviewed in the United States on January 8, 2012
Verified Purchase
I bought Fullmetal Alchemist Part 4 & Part 5 on Amazon (in Blu-ray) The story is wonderful, animation is amazing, voicing is great. The cover of the dvds are invertible and have different art on both sides. Everything about this has a wonderful quality to it. It also comes with cute post cards in each case. A wonderful buy!! Especially Part 4 & 5, where the story becomes VERY intense!!

All I have to say is BEWARE, as you may want to buy a 6 pack of tissues along with these last 2 parts of the series. It was intense and heartbreaking! I definitely plan on buying the first 3 parts if the price goes down. (They're around $30; and free on Netflix, where a season usually costs around $20)

The only problem I'm having is that there are no subtitles! I'm not sure if the Blu-ray hasn't added this feature, but from the menu screen & PS3 menu, there is no way to put subs on, and it says it isn't available. This is disappointing.

Other than the lack of subtitles, this is definitely worth the money! It puts you in the mood to braid your hair and clap your hands, then smack them onto the table, etc. Just remember, If one wishes to obtain something, something of equal value must be given. This is the Law of Equivalent Exchange, the basis of all alchemy. In accordance with this law, there is a taboo among alchemists: human transmutation is strictly forbidden - for what could equal the value of a human soul...?

Amazon Customer
4.0 out of 5 stars Loved It!
Reviewed in the United States on December 25, 2012
Verified Purchase
This is a tale of suffering and redemption. A beautiful story of two brothers who refuse to give up in spite of everything life has put them through. It is a wonderful story. A tear jerker. A heart warmer. An inspiration. I loved it. The manga is a bit different than the anime. To get the whole picture i recommend getting the blu-ray anime sets along with the manga. Get FMA and FMA Brotherhood as soon as you can. You wont be sorry.
Read more
Helpful
Comment Report abuse

Harry B. Miller
5.0 out of 5 stars anime of the century
Reviewed in the United States on August 6, 2012
Verified Purchase
this anime is the gold standard to witch all other animes should be compared, the voice actors are the best funimation has to offer and the animation is top notch, for all you new fans who are confused i know i was the manga came out first and then the first fullmetal alchemist tv show then the fullmetal alchemist brotherhood came out just recently and got wayyyy more better rateing then the first tv show the reson was that the brotherhood version was staying true to the origanal manga and the first tv show no offence but it was badly directeted and made poorly, in the fullmetal alchemist world there is sevral debates about witch came first the first tv show or the manga and i can tell you with utmost truthfulness that the manga came first so if you like reading get the manga and if you like watching get the fullmetal alchemist brotherhood and if you like playing get the video game all around the best anime tv show iv ever had the plesure of watching cheers see you later
Read more
Helpful
Comment Report abuse

Katelyn Anton
5.0 out of 5 stars Fullmetal Alchemist: Brotherhood, Part 4
Reviewed in the United States on January 24, 2014
Verified Purchase
One of the best anime series out there, filled with great sounds, and picture quality, fantastic voice actors, plenty of bonus features, I was extremely excited to add this to my collection. HIGHLY RECCOMEND FOR ANYONE WHO LOVES THIS SERIES. Full Metal Alchemist Brotherhood is even better then the original.
Read more
Helpful
Comment Report abuse

Kindle Customer
4.0 out of 5 stars Fullmetal Alchemist Part 4
Reviewed in the United States on February 14, 2012
Verified Purchase
Product arrived on time! That is important to me...I actually bought part I, II, III, this one part 4 and I am pretty sure I bought part 5. It was to be a Christmas present for my son. I do not know much about Fullmetal Alchemist series...but I do know that I did something right when I saw the expression on my son's face when he opened his present. Quality was good...My experience with Amazon has always been excellent.  Fullmetal Alchemist: Brotherhood, Part 4
Read more
Helpful
Comment Report abuse

omallytheallycat
5.0 out of 5 stars Buy it you wont be disapointed!
Reviewed in the United States on May 25, 2011
Verified Purchase
let me make this straight to the point and with no spoilers! Buy this you wont be disappointed. Every person ( about 25 different people aged form 16-45)that i have had watch this series love it! Every time i buy another chapter of the story i get a waiting list of people wanting to barrow it!. This is one of the best story lines I have ever watched. Laugh , cry, scream, then laugh again.......you will not be disappointed..just buy it!
Read more
One person found this helpful
Helpful
Comment Report abuse
See all reviews

Matthew
5.0 out of 5 stars I love the show
Reviewed in Canada on September 13, 2015
Verified Purchase
I love the show. I bought the five parts at different times and three of Amazon and two Blue Ray from London Drugs. I found that the Amazon copies had better sound balance than the Blue Ray versions. I was completely satisfied with this copy. It worked perfectly
Read more
Report abuse

Honest one
5.0 out of 5 stars It's great.
Reviewed in Canada on January 16, 2017
Verified Purchase
It's FMA. Is there anything else to say? It's great.
Read more
Report abuse

Naomi
5.0 out of 5 stars Five Stars
Reviewed in Canada on July 17, 2014
Verified Purchase
Excellent condition, all the discs play well, and I am just so glad to have completed my FMA collection!
Read more
Report abuse
See all reviews