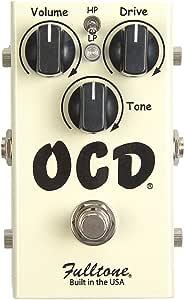 4.7 out of 5 stars
4.7 out of 5
363 global ratings
How are ratings calculated?
To calculate the overall star rating and percentage breakdown by star, we don’t use a simple average. Instead, our system considers things like how recent a review is and if the reviewer bought the item on Amazon. It also analyzes reviews to verify trustworthiness.

Mark KingTop Contributor: Bass Guitars & Gear
5.0 out of 5 stars ONE OF THE BEST OVERDRIVES EVER MADE, NOW V2
Reviewed in the United States on July 27, 2017
Verified Purchase
I'm a big fan of Fulltone pedals. Not because Mike Fuller is a nice guy (he's not) but he sure builds some great sounding pedals and that's all I care about.

This is the latest and greatest from Fulltone. This is the official version two of the incredible OCD. You can recognize the latest by the littler Fulltone logo and the built in USA tag under it which none of the others had.

This is the latest Fulltone metalwork too, it's easy to open and replace the battery or adjust the buffer settings.

This is one of the finest sounding overdrives ever made. If you're on the fence just buy it, it is smooth and sounds great. Excellent price here on Amazon, fastest shipping of any supplier. Love it!

Good music to all!

Hiwatt100
5.0 out of 5 stars Review for OCD V2, love its untamed overdrive, but not for the fainthearted.
Reviewed in the United States on March 22, 2018
Verified Purchase
I have been using Fulltone pedals for over 15 years and have had numerous pedals of various functions (3 different Fulldrives, 2 different Deja-Vibes) etc. Honestly some I have not really liked and some I still use to this day and thats OK. One thing that is not disputable is the quality of ALL of the pedals has been superb. Say what you will about customer service, but as a private consumer, I have emailed Fulltone several times over the years with an inquiry and believe it or not, ALL of my emails have been answered by Mr. Fuller personally, some almost immediately. For my own personal needs, I have every intention to continue to purchase Fulltone products. As for the OCD, this is my second OCD pedal. My first one was one of the very first OCD shipments to come out of Fulltone and although it performed as advertised and described, it never really blew up my skirt and I passed it on. Recently I purchased the final issue, the V2 edition and I love it. It may look like the early versions, but to my ears, its a different pedal and has evolved into what I need now and I will not look back. I remember the very first descriptions of the pedal and what Mr. Fuller meant by an "OCD" pedal and believe me, this pedal is all that and more. I use 100 watt HiWatts, Vibro-King stack, 57 Tweed Twin, Plexi stack and even a Blues Junior and this pedal seems to have never met an amp it didn't like. My personal motto is anything worth doing is worth doing in excess and this fits right in. Enjoy, but remember, this pedal will take no prisoners and may ultimately out do the Plimsoul, which I also own.
Read more
11 people found this helpful
Helpful
Comment Report abuse

PC
5.0 out of 5 stars Turn the tone knob left, then right, then left again, then right two times, then press switch three times.
Reviewed in the United States on October 6, 2017
Verified Purchase
This is it: the third corner of the unholy triangle of devastating OD's (Chandler Limited and Tubescreamers comprise the other two). For that buzzsaw-y old school death metal tone, ABSOLUTELY use an 18v power supply, set the Tone to about 1:00-1:30, the switch to HP, the Drive almost all the way down (pointing at the tone knob), and the Volume up, and assuming you didn't completely mess your amp tone up, you'll nail it every time. I prefer this pedal for tremolo-picked riffs, pinch harmonics, and power chords.

G Money
3.0 out of 5 stars It's a fuzz box
Reviewed in the United States on October 28, 2018
Color: MultiColoredVerified Purchase
I can't say whether you will like this pedal. Sound is subjective. I can tell you it's built like a tank and works perfectly. I prefer real tube amplifier distortion and have never found a distortion pedal I liked so take that for what it's worth. I use this one for soloing, to add grit and sustain to an already mildly distorted tube amplifier (Marshall). I can't decide if I like it or don't. I know I don't like it using it in front of a clean amp and am undecided otherwise. I probably would not buy another. However, that's just me. Others may love it.
Read more
8 people found this helpful
Helpful
Comment Report abuse

Adam Slade
5.0 out of 5 stars Perfect boost/OD for Orange amps
Reviewed in the United States on January 18, 2020
Color: MultiColoredVerified Purchase
I'm obsessed with Orange amps, and like many people I have spent a lot of time and money trying to find the perfect pedal to function as a boost/OD for solos/bridges. I play a Gibson Les Paul Standard w/ humbuckers through a Rocker 30 or OR15 depending on my use case, and play mostly punk rock, dirty rock n roll, and some metal. I think what I've always wanted was my amp to sound like an Orange and somehow get leads to sound more like a Marshall JCM800. Tighter, more responsive, more percussive, and plenty of volume boost when engaged. The Fulltone OCD does exactly that and more, while preserving the Orange's natural character.

I mostly use it with the volume dimed out, drive at 0, and tone at 12 o clock for boosts, but there are several other usable tones in this box. Another journey entirely, but the OR15 especially hates fuzz pedals (probably due to lack of headroom). The Fulltone OCD with the gain and tone knobs dialed in just right (also with tweaks to amp controls AS WELL AS guitar tone adjustments) pretty much nails a classic Sleep or Sabbath-y fuzz tone. You can also get a wicked Marshall-like punk tone with the gain set to around 11-2 o clock on the pedal and the gain on the amp at around 10-11 o clock. It's very accommodating for the types of music I play.

If you have a similar set up and play similar genres, I'm really don't think there is anything better. I've gone through several Tube Screamer variations (Analogman modded Ibanez TS9, Maxon OD9, Maxon 808), and while the Maxon OD808 probably got the closest to what I was looking for I was still never truly happy with the way it colored my amp's natural tone. The inclusion of True Bypass on the OCD is also a win over the Maxon. I also went through a few clean boosts, like the BBE Boosta Grande and MXR Micro Amp. Both of these pedals function great for strictly volume boosts (nod to the BBE for being utterly transparent), but the option of added grit on the OCD for sustain and compression was a must for me.

Side note: If you want are going down a Fuzz pedal rabbit-hole with either of these amps, here's my advice. The OR15 lacks the proper headroom to get usable sounds out of a Fuzz pedal, but using an OD while dialing in all your knobs works wonders. The amp already has a pretty great fuzz tone built-in. The Rocker 30 is more kind to Fuzz pedals, but is still very picky. In my opinion, the search should probably end with a Black Arts Toneworks Pharaoh. Lots of great tonal option with this combo.
Read more
3 people found this helpful
Helpful
Comment Report abuse
See all reviews

David Bass
5.0 out of 5 stars Definitely a keeper
Reviewed in the United Kingdom on August 6, 2018
Color: MultiColoredVerified Purchase
I prefer this to my Tube Screamer. Seems to have more crunch and sparkle. Using it through a Roland Blues Cube. Definitely recommend for a nice blues tone.
Read more
2 people found this helpful
Report abuse

Rick
5.0 out of 5 stars Excellent pedal
Reviewed in the United Kingdom on April 23, 2019
Color: MultiColoredVerified Purchase
Excellent pedal - I never used version one, all I can say is that this pedal is a great overdrive pedal for me, very smooth and clear, I’m happy
Read more
Report abuse

Anonymousx
5.0 out of 5 stars Excellent OD - Works as advertised
Reviewed in Canada on March 18, 2019
Color: MultiColoredVerified Purchase
A really nice OD pedal. Great warm tube-like tone. It sounds much fuller with the volume opened up some, but its a great amp to push your drive more and still remain dynamic. Is the tone overrated? Maybe, its really a traditional tone I guess. This pedal does exactly what you expect and works great for general crunch and lead tones.
Edit: Been using it for 3 months now and its really becoming my favourite OD. I've A/B it with several others and the OCD slays them all. It doesn't lack the low end of so many pedals and the HP mode gives you that ideal grit. I love this pedal, the only thing that comes close is my Xotic stuff that is more expensive.
Read more
2 people found this helpful
Report abuse

Page 1 of 1 Start overPage 1 of 1
This shopping feature will continue to load items when the Enter key is pressed. In order to navigate out of this carousel please use your heading shortcut key to navigate to the next or previous heading.
Back
Next
Pages with related products. See and discover other items: effect pedal, guitar amp pedal, best guitar pedal, Effect Pedals, Effects Pedals, Overdrive Effects Pedals