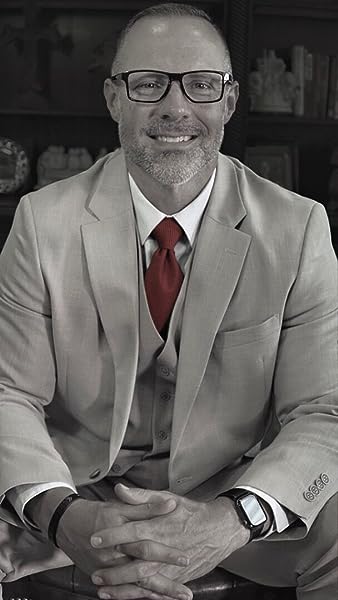 Fully Awake 365: 365 Days That Will Challenge Your Mind, Channel Your Power and Change Your Life Paperback – December 1, 2022

by D.E. Paulk (Author), LaDonna Paulk Diaz (Author)
5.0 out of 5 stars 1 rating
See all formats and editions
Sorry, there was a problem loading this page. Try again.
You are about to embark on 365 days of a transformational journey that will radically shift your consciousness, awaken your creative capacity and summon your God-given power. These 365 Affirmations will Challenge Your Mind, Channel Your Power and Change Your Life. Each affirmation, teaching and affirmative prayer is designed to purposefully turn you within so you can powerfully create without. I am honored you would join me on the journey of becoming Fully Awake. D.E. Paulk and his sister, LaDonna Paulk Diaz, are pastors of Spirit and Truth Sanctuary, a radically inclusive spiritual community in Atlanta, GA. Here is the beauty of vibration: they think so much alike that we challenge you to see if you can decipher which one of them wrote which devotionals.
Read more
Previous page
Next page

D.E. Paulk is the Senior Pastor of Spirit and Truth Sanctuary in Atlanta, GA. where he successfully transitioned an Evangelical Charismatic church into a thriving multicultural, interfaith, LGBTQ+ affirming congregation. D.E. holds a Master of Theological Studies (M.T.S.) in Global Religions from Emory University’s Candler School Of Theology and is widely known as a radically inclusive minister who believes that the Christ Spirit is present in all of creation and cannot be defined by, nor confined to, Christianity.

“D.E.’s preaching is as easy-going as the church’s approach to differences. No wagging fingers or thunderous revelations. He treats parishioners as fellow companions on a spiritual journey. He sprinkles his conversational sermons with references to everyone from the Buddha to Teddy Pendergrass.” -John Blake, CNN Enterprise writer/producer

“Descended from generations of Southern preachers, Donnie Earl is now a preacher himself, though a different breed.” -Katherine Marsh, Rolling Stone Magazine, from the article Son of a Preacher Man

His family founded Chapel Hill Harvester Church (formerly The Cathedral of the Holy Spirit) in 1960. The Paulks have always been known for their ministry of restoration. For over 62 years, the Spirit and Truth Sanctuary has opened its doors to people from every walk of life. This has served as the foundation of who D.E. is today.

D.E. has been the recipient of numerous community, civic and service awards. In 2008, D.E. was inducted into the Morehouse College Dr. Martin Luther King, Jr. International Board of Preachers. In 2009, he was honored by Cornerstone University in Lake Charles, Louisiana with an honorary doctorate degree for his in-depth theological research and writings. In 2010, D. E. began serving as a National Board Member for the Southern Christian Leadership Conference (S.C.L.C.), the historic civil rights organization founded by Dr. Martin Luther King, Jr. He has authored several books including I DON’T KNOW… THE WAY OF KNOWING, THE HOLY BIBLE OF INCLUSION and his most recent release, FULLY AWAKE (a 100 day devotional aimed at challenging the mind, channeling power, and changing paradigm). All of D.E.’s books are available for purchase in paperback on Amazon and PayPal and as E-books on Amazon, Kindle, Nook, Google Play and Apple Books.

D.E. Paulk makes his home in suburban Atlanta along with his wife, Brandi, and children, Esther and Micah.