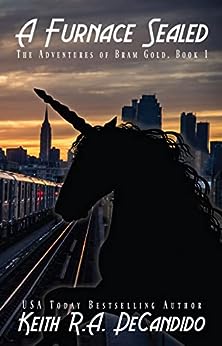 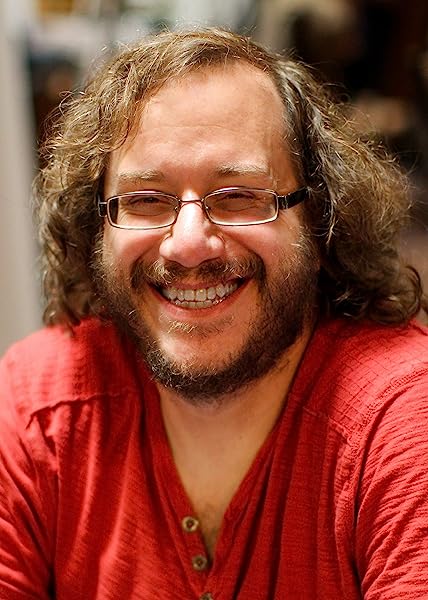 A Furnace Sealed (The Adventures of Bram Gold) Kindle Edition

by Keith R.A. DeCandido (Author) Format: Kindle Edition
See all formats and editions
Sorry, there was a problem loading this page. Try again.
In pursuit of a scoop, American journalist Hal Garson follows up on a mysterious, desperate letter that points to the whereabouts of legendary author Antone Luac, who vanished without a trace in Mexico years ago. The celebrated writer's disappearance is an enduring mystery, and Garson senses this story will make his career. Despite warnings, he travels to isolated Ciudad Brockman and begins asking questions … too many questions, which place him in the crossfire of a local crime lord, a Communist insurgent group, and finally to the imprisoned writer—and his beautiful daughter—who may not want to be found.
Read more
Previous page
Next page

Keith R.A. DeCandido was born and raised in New York City to a family of librarians, which pretty much explains everything. He has written more than 50 novels, as well as short stories, nonfiction, eBooks, comic books, and blog entries, many of them in various media universes, among them Star Trek, Alien, Supernatural, World of Warcraft, StarCraft, Marvel Comics, Cars, Farscape, Buffy the Vampire Slayer, Stargate, Serenity, Resident Evil, Kung Fu Panda, Doctor Who, Sleepy Hollow, Leverage, Orphan Black, and more. Among his many works of original fiction are the fantasy police procedural series of novels and short stories that started with Dragon Precinct, as well as a series of urban fantasy short stories set in Key West, Florida, many of which are in Ragnarok &amp; Roll: Tales of Cassie Zukav, Weirdness Magnet, fiction about cops in a city filled with super heroes, and an urban fantasy series about a nice Jewish boy from the Bronx who hunts monsters, starting with the novel A Furnace Sealed. Keith is also an editor (having supervised several book lines and put together dozens of anthologies), musician (percussionist for the Don't Quit Your Day Job Players, the Boogie Knights, and others), pop culture commentator (he writes for both Tor.com and his own Patreon at patreon.com/krad) and a third-degree black belt in Kenshikai karate (he both trains and teaches). He still lives in New York City with various humans and animals.

Alex Jay Berman
5.0 out of 5 stars A great beginning to what should be a long series
Reviewed in the United States 🇺🇸 on March 2, 2020
Verified Purchase
A FURNACE SEALED, the first book featuring Bram Gold, doctor and hunter of magician beings (Though he's more like a game warden than a hunter, really), is a really good book which draws you into its world and through its pages at a rollicking pace.

The book will seen familiar to, and attractive to, readers of Jim Butcher's DRESDEN FILES, but DeCandido's world stands ably on its own, without being derivative in the least.

I've only ever driven through the Bronx, but it is lovingly presented here in a way which makes it feel like home, even aside from the magical touches.

Bram's narrative voice is very compelling and charming. The magickal world (even if the world is largely restricted to one borough, at present) the author has concocted is both believable and authentic; it builds organically, behind the story, without getting in the way of what is really a very well-told tale.

I hope the next one comes out soon, and will be looking forward to all the ones after that.
Read more
One person found this helpful
Helpful
Report abuse

Jeffrey Hansen
3.0 out of 5 stars Not bad at all, but meh
Reviewed in the United States 🇺🇸 on March 12, 2021
Verified Purchase
Meh. Not bad, but the author’s tendency to map out the exact route to every destination street by street got a little old.
Read more
Helpful
Report abuse

Chelsea Provencher
5.0 out of 5 stars Delightful Urban Fantasy
Reviewed in the United States 🇺🇸 on February 6, 2019
Verified Purchase
I've been reading bits of the novel that were released on the author's Patreon for months now, and the book was worth the wait!

The author is a born and bred New Yorker and the love for his city practically oozes from the pages. It’s so refreshing to see other parts of New York, besides Manhattan, represented in prose. There are a slew of tidbits about the city thrown in. They showcase the history of the city and the flavour of the different neighbourhoods. The tidbits also add depth to the story, and as a history lover, they make me want to go read up more on the topics mentioned.

The dialogue is witty and I could “hear” individual voices for each character in my head. “Moose f***** a dead octopus” is one of the best lines from the book and one I continue to chuckle over each time I read it.

Samantha
5.0 out of 5 stars Fun Urban Fantasy
Reviewed in the United States 🇺🇸 on February 21, 2019
Verified Purchase
I'm not good at reviews, however I want this series to continue! this is a very enjoyable first book in a series. If you're a fan of urban fantasy I think you'll like this. It reminds me a bit of the first few books in the Dresden Files, where it's a stand alone story, but (potentially) a part of a bigger story. I want to see more! And I want to learn more Yiddish.
Read more
One person found this helpful
Helpful
Report abuse

Kindle Customer
5.0 out of 5 stars Delightful Romp with Werewolves and More
Reviewed in the United States 🇺🇸 on March 4, 2019
Verified Purchase
I am eagerly awaiting additional adventures with Bruam, Mimi and the rest of the gang protecting the Bronx from supernatural problems.
Read more
Helpful
Report abuse

J. L. Gribble
5.0 out of 5 stars My newest favorite urban fantasy series
Reviewed in the United States 🇺🇸 on February 28, 2020
Disclaimer: I am friends with the author; however, I purchased a hardcopy version of this book for full price.

Sometimes a book is really easy to review. I started it about an hour before I went out with friends for the night. I spent the entire evening wishing I was back home reading the book. And I promptly finished it the next morning, because I knew I wouldn’t get anything else done until then.

Oh, you want more information about the book itself? Okay, okay.

I’ve been a fan of DeCandido’s media tie-in works for years, long before I could consider calling him my friend. He’s done great work with both Star Trek and Supernatural. A Furnace Sealed is actually the first long-form work of original fiction that I’ve read by him, and I have no idea why I waited so long.

The reason I reject a lot of urban fantasy tropes in my own writing is because they annoy me. In this book, DeCandido does the opposite, by embracing those tropes and twisting them just enough, writing with enough familiarity of both the world he’s created and the audience he’s invited in, to create an appealing story with memorable characters. So much of traditional urban fantasy also defaults to Judeo-Christian mythology that I was extra pleased when this book used the setting of New York City to employ local mythology in the greater plot rather than importing Euro-centric bad guys. In an urban fantasy setting, New York City should definitely be a melting pot for more than just it’s human inhabitants. (Extra bonus points for secondary character representation of race, sexual orientation, and mobility issues.)

I adored the main character, Bram Gold, from page one. The obvious reason is that I have a soft spot for Jewish protagonists. The less-obvious reason is because Bram Gold is not your typical suave, sexy monster hunter — in fact, he’s kind of a mess. The fabulous first-person narration pulls you along so that you don’t get a chance to do more than roll your eyes occasionally, because you’re still rooting for Bram to win in every scenario.

And finally, the ultimate twist is that the Big Bad isn’t Bram’s biggest problem in this book. No spoilers, but I will always appreciate a story where the heroes don’t get to just go back to their normal life unchanged by the events that have occurred.

Lee Thalblum
5.0 out of 5 stars I loved this book!
Reviewed in the United States 🇺🇸 on April 12, 2019
I just finished reading "A Furnace Sealed" and I loved it. I can't wait for the next 6 books in the series. The descriptions of the neighborhood the action takes place in made me feel like I was really there. I think Keith should stop twiddling his thumbs and start writing the next book. (Disclaimer: 5 out of 4 doctors have diagnosed me as a case of severe wiseass. They've also discovered that my math skills aren't that great either).
Read more
Helpful
Report abuse

Kraftster
5.0 out of 5 stars Fantastic Urban Fantasy
Reviewed in the United States 🇺🇸 on July 19, 2019
The story was compelling, and the location specifics made it even more real. Impatiently waiting for the next book!
Read more
Helpful
Report abuse
See all reviews

Gordon
5.0 out of 5 stars Modern magic
Reviewed in the United Kingdom 🇬🇧 on October 6, 2019
Verified Purchase
Another Great read by Keith. Rattled through the book in a day while on holiday. Can’t wait for the next in the series.
Read more
Report abuse
See all reviews
Report an issue
Does this item contain inappropriate content?
Report
Do you believe that this item violates a copyright?
Report
Does this item contain quality or formatting issues?
Report