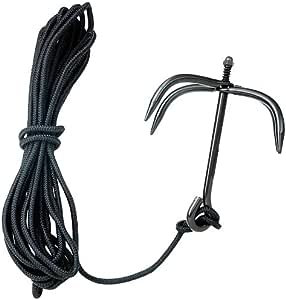 Used by ninjas to scale walls, climb trees and aid in quick escapes. This grappling hook by Fury has been specially designed to fold flat when not in use. Heavy duty midnight black finished steel hook is compact and easy to carry and comes with a 33 foot nylon rope. Originally a ninja warrior necessity, this grappling hook has many other practical uses as well. The military uses grappling hooks to help remove obstacles from a distance, especially when they are suspected of being rigged with explosives. And as the name suggests, you can throw the grappling hook to an item and drag it back to you. Especially useful for out of reach or dangerous items making this Fury Grappling Hook a necessity for your survival gear bag. Not recommended for children or climbing.

4.3 out of 5 stars
4.3 out of 5
473 global ratings
How are ratings calculated?
To calculate the overall star rating and percentage breakdown by star, we don’t use a simple average. Instead, our system considers things like how recent a review is and if the reviewer bought the item on Amazon. It also analyzes reviews to verify trustworthiness.

George Takei
5.0 out of 5 stars Got Me Past the TSA
Reviewed in the United States on June 23, 2013
While traveling to the recent Osaka Ninja-world Annual Gala and Silent Auction, I decided not to check a bag. After all, my mask, robe, and slippers neatly fit into my pink Hello Kitty knapsack, cinched tight across both shoulders. I don't know why I decided to bring my Ninja Folding Grappling Hook, or why I thought I could walk through security with it. First mistake.

"What is that?" demanded the TSA agent, who looked remarkably like Nikki Minaj. Perhaps it was because she appeared well prepared to cast ample "shade" my way.

"It's a grappling hook. Haven't you ever seen one?" Second mistake.

"You can't carry weapons on board," she intoned, gesturing to the prohibited list, then inspecting a chipped nail.

"It's not a weapon, and grappling hooks aren't on this list," I pointed out, in my good natured tone. Third mistake. "Aerosols, oxygen tanks, box cutters, but no grap--"

"You'll have to check it, grandpa," she interrupted, her head tipped to one side, a challenge. "No exceptions."

The woman in front of me gave me a sympathetic look. She apparently was trying to bring on a dozen Russian nesting dolls, which were being opened one-by-one by an increasingly incredulous agent.

I understood that I'd have to take matters into my own hands. I retreated from the line, then found an empty stall in a nearby restroom. From my HK knapsack I removed my approved ninja attire, then located an air duct by removing a single ceiling tile. (This doesn't just work in movies--it's actually a known thing.)

The duct led me to a Jamba Juice not far from the security area. I dropped down behind the counter unseen, then slipped past a family from Topeka with a single "shhhh!" to my lips and a toss of an orange to the overweight 10-year old son. "Eat this instead," I suggested to the bewildered lad.

Slipping along the sheer wall of the secure area (yes, sheer, F you, I'm a ninja), I spied a support beam high above on the other side, perfect for my grappling hook. I created a distraction by releasing two mice into the line. (This is also a known thing.) "Nikki" seemed particularly distraught by the mice ploy, shrieking "Lord, oh Lord, oh Lord!!" to my deep satisfaction. During the pandemonium, I swung unseen, as ninjas will, over the security area.

V. Sparrow
5.0 out of 5 stars Grappling Hook of Grappling Hooks!
Reviewed in the United States on February 13, 2018
Verified Purchase
This isn't the usual gift one gives their almost 9 year old grandson for Christmas, but ours had been asking for one of these for a couple of years. He's already a black belt in taikwando, so we felt he could handle this. This grappling hook is well made and heavy enough to do the job, whether it be climbing up the backyard "floating platform" or trying to capture things in the grass and drag them back. I love the fact that the hook closes up for storage....and is made VERY well! With this product comes much responsibility, but we had that "talk" and so far, so good! We are pleased. Our grandson is happy, as he can now be a full-fledged "ninja". Mom? That's still in debate! GREAT product though!
Read more
5 people found this helpful
Helpful
Report abuse

Levi Z.
4.0 out of 5 stars Never climbed with it, but it did what i wanted.
Reviewed in the United States on October 11, 2017
Verified Purchase
Never used this for climbing so I can't speak for its capabilities there. But I used this to pull moss and limbs out of a pond that was too overgrown to fish. When I threw this thing in the water and started to pull it back to shore I couldn't believe how much this thing would bring out with it. Although I spend several hours pulling moss and got sick of it and have up before even coming close to clearing that entire pond. But that's no fault of this product. I guess that fishing hole will only be available certain times of year when the moss does on its own.
Read more
5 people found this helpful
Helpful
Report abuse

Daniel C.Top Contributor: Photography
3.0 out of 5 stars It works just fine it seems
Reviewed in the United States on April 30, 2016
Verified Purchase
It works just fine it seems. I wouldn't call it anything special. The only reason for three stars instead of 5 is just because the hook comes out of place too easily and I am hesitant about​ using it with some weight because of the stories I heard from this specific one.
Read more
7 people found this helpful
Helpful
Report abuse

Colin Blauer
3.0 out of 5 stars not real strong
Reviewed in the United States on June 5, 2020
Verified Purchase
I bought this to use to pull alligator weed out of my pond, the 2nd throw out into it and pulling it in ( which did take some effort but not like if I was climbing weight) one of the tongs bent at the thin crossover point. I took it in my shop and welded the cross together at the flat points so it will be durable for my use.
Read more
Helpful
Report abuse

Timothy L Marksberry
1.0 out of 5 stars Don't waste your money
Reviewed in the United States on July 17, 2018
Verified Purchase
Bought this item awhile back and finally used it. It wouldn't even pull small, dead brush out of a little ditch without breaking. It was cut brush, less than 1" in diameter that had been there for one year. I broke off two tongs and tried again with the remaining two. Same thing, first try. The last two broke off. Total junk! Cast, cheap metal. Not sure why people are buying these. Don't waste your money. It really deserves zero stars. My review is coming from someone who never leaves one.
Read more
3 people found this helpful
Helpful
Report abuse

Faith
1.0 out of 5 stars Missing parts
Reviewed in the United States on April 4, 2019
Verified Purchase
Just got it in the mail and it’s missing pieces. I can’t put it together without the main part. I emailed the seller and hopefully I’ll get a response.
Read more

Robert Smit
5.0 out of 5 stars Magnet fishing hook
Reviewed in Canada on October 4, 2020
Verified Purchase
I bought this product fir magnet fishing. It worked great. Small enough to put in my kit, light weight but extremely durable. Well worth the purchase.
Read more
One person found this helpful
Report abuse

Magnet fisher
5.0 out of 5 stars good strong hook to latch on to whatever magnet may clamp onto magnet fishing.
Reviewed in Canada on July 19, 2020
Verified Purchase
have not used yet but from watching magnet fishing videos I'm glad to have for back up in case I clamp onto something like a bike etc. So I can get a good grip on it.
Read more
One person found this helpful
Report abuse

AvidJosh
5.0 out of 5 stars Likes it
Reviewed in Canada on October 30, 2018
Verified Purchase
Got it for my Dad. He seems satisfied with it.
Read more
One person found this helpful
Report abuse