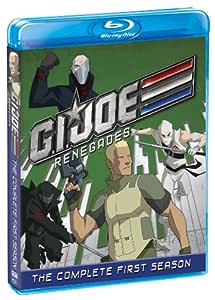 When a spy mission against Cobra Industries goes awry, a group of young G.I. JOEs is forced to hit the road as fugitives. Now the team members (Duke, Scarlett, Roadblock, Tunnel Rat, Ripcord and Snake Eyes) must use their wits and elite training to prove their innocence to the world before being caught by the authorities, Cobra or another elite military team called the Falcons.

4.8 out of 5 stars
4.8 out of 5
25 customer ratings
How does Amazon calculate star ratings?
Amazon calculates a product’s star ratings based on a machine learned model instead of a raw data average. The model takes into account factors including the age of a rating, whether the ratings are from verified purchasers, and factors that establish reviewer trustworthiness.
Top reviews

Dominic
5.0 out of 5 stars AMAZING, what GI Joe is all about.
Reviewed in the United States on June 2, 2013
Verified Purchase
FYI, I grew watching GI Joe : a real american hero and was a big fan of the toys also.

I had heard of Renegades, but I never watched it. I bought this blu ray and just finished watching it with my son. OMG what a great show! It was a new take, a prequel kind of thing. I am stunned at how good it was.

The main characters were, slightly, reinvented and fresh. The idea of introducing secondary characters was great. If you were a big enough fan and read the filecards that came with the action figures you could quickly recognize their real name before the codename was mentioned.

Artistically speaking, the drawing were amazing, a unique style that separated the show from the others.

It's really too bad they didn't come up with a season 2, they should have waited for DVD and Blu ray sales. They should have considered that 40 year old kids like me would maybe not tune in every week, but would definitely buy it later. Oh well...

Perfect for any GI Joe fan, don't hesitate to buy it, you will love.

Simon
5.0 out of 5 stars I love the animation style
Reviewed in the United States on October 26, 2015
Verified Purchase
The show is extremely well-conceived and well-written. I love the animation style. I love how Cobra was reimagined to fit so believably into our world. As wonderful as Cobra may be, this may be the only part of the GI Joe franchise in which I actually care about the well-beings of the Joes themselves. It's also the only part of the GI Joe franchise that I can watch unironically and that I'm eager to talk about with others. I strongly recommend the series, even to newcomers to the franchise.
Read more
2 people found this helpful
Helpful
Comment Report abuse

DARRELL MADDOX
5.0 out of 5 stars YOOOOOO JOE!
Reviewed in the United States on April 19, 2016
Verified Purchase
I definitely enjoyed this incarnation of G.I. Joe and it was definitely a great reboot of the original series the only discretion was, it had so much potential for a second season.
Read more
2 people found this helpful
Helpful
Comment Report abuse

This is my first GI Joe animated series. I am not familiar with the famed 80's cartoon, although to my knowledge this series is a little more serious and less cheesy.

I enjoyed the story of the Renegades. It is told from a less-cheesy-but-not-too-dark frame and features decent enough plotlines for an animated series aimed at kids (most notably, the Joes realistic weaponry is replaced in this series by futuristic laser weapons). The main plot revolves around the Joes being accused of a crime against Cobra industries and being pursued by both Cobra and the military, although several subplots are explored. (A notable subplot being the two-part backstory of Snake Eyes)

The Blu-Ray visuals look sharp with good contrast and saturation. It isn't particularly mind-blowing, but it looks great and serves the purpose. The sound really shines with a 5.1 DTS-HD MA track that really punctuates the action. I suspect it sounds a great deal better than the DVD or TV versions in this regard but I cannot comment completely. The season is separated onto 3 discs and several commentary tracks are included.

I bought this Blu-Ray as a deal of the day blind buy after seeing only the pilot, and I am glad I did so. It's a great add to my collection as a 24-year-old fan of animated action series.
Read more
One person found this helpful
Helpful
Comment Report abuse

Zeldini Metasasuki
5.0 out of 5 stars A great series
Reviewed in the United States on February 10, 2019
Verified Purchase
Ever wonder how gi joe and cobra started? This gives one explanation and it is very interesting to watch. Wish that a season 2 would continue where this left off.
Read more
Helpful
Comment Report abuse

cffincher
5.0 out of 5 stars Excellent story/animation
Reviewed in the United States on March 1, 2018
Verified Purchase
Great story line and excellent animation style. My 8-year-old daughter loves this version of GI Joe! It leaves it open for a second season which unfortunately never got produced.
Read more
One person found this helpful
Helpful
Comment Report abuse
See all reviews from the United States

RANDOLPH
5.0 out of 5 stars G. I. blu
Reviewed in Canada on August 9, 2019
Verified Purchase
Enjoy this animated series on the format of blu ray
Read more
Helpful
Sending feedback...
Thank you for your feedback.
Sorry, we failed to record your vote. Please try again
Report abuse