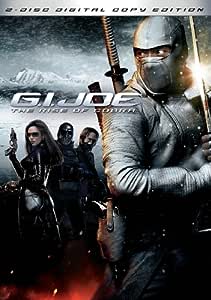 Channing Tatum (Actor) Rated:
PG-13
Format: DVD
4.4 out of 5 stars 1,965 ratings
See More
Available at a lower price from other sellers that may not offer free Prime shipping.

Based on Hasbro’s immensely popular action figures, G.I. Joe is the ultimate elite fighting force, engaged in an extraordinary action-adventure matchup of good versus evil! In G.I. Joe: The Rise of Cobra, the G.I. Joe team, armed with the coolest hi-tech gadgets and weapons, travels the world from the Egyptian desert to the polar ice caps in a high stakes pursuit of Cobra, an evil international organization threatening to use a technology that could bring the world to its knees.

The Rise of Cobra is not your grandfather's G.I. Joe. It's more like C.G.I. Joe with explosive special-effects action sequences that provide the film with a surplus of "Boom Boom Pow" (to quote the Black Eyed Peas song that drives the end credits). This blast from the summer past is very much like the metal-munching nano-mite missiles a (literally) mad Doctor (Joseph Gordon-Levitt cashing in some of his indie cred) and McCullen, a Scottish weapons dealer (Christopher Eccleston), threaten to unleash upon the world. It never stops. Ever. The original G.I. Joe action figure was an all-American hero. These Joes are--all together now--"the best of the best," an elite multi-national squad. Two soldiers, Duke (a buff Channing Tatum), an "on the ground, in the fight" kind of guy, and Ripcord (Marlon Wayans), his wisecracking best friend, are rescued by the Joes after they are ambushed while transporting the missiles. These are no ordinary Joes. Snake-Eyes (Ray Park) is a silent ninja, Stella (Rachel Nichols) a bodacious brainiac, Heavy Duty (Adewale Akinnuoye-Agbaje) the imposing weapons specialist, and Breaker (Said Taghamaoui) the techie. They are led by gruff Gen. Hawk (Dennis Quaid), who barks out lines like, "When all else fails, we don't," with polish. Duke and Ripcord are recruited to join the classified unit after Duke discovers that Ana (Sienna Miller), his former fiancée, is in cahoots with McCullen and now sports the sinister moniker the Baroness, not to mention killer cleavage-enhancing latex outfits. This being the first in a budding franchise, there is much backstory to cover. Flashbacks date back to 1641! But the order of the day is underground military command centers, underwater evil lairs, gleaming high-tech weaponry, breakneck chases, and cool gadgets, such as a speed-accelerating hydraulic suit. It's enough to make you want to dust off your original Hasbro action figures or, the studio no doubt hopes, buy the new ones. --Donald Liebenson

Stills from G.I. Joe: The Rise of Cobra (Click for larger image)