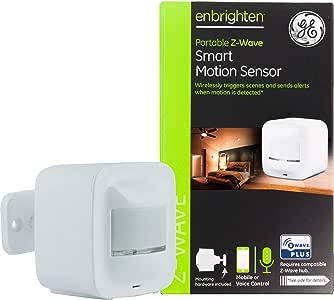 Add to Cart
$29.95
+ Free Shipping
Sold by: Tazmotive
Have one to sell?
Sell on Amazon

by GE
3.7 out of 5 stars 103 ratings
Available at a lower price from other sellers that may not offer free Prime shipping.

Make the move toward convenience with the GE Enbrighten Z-Wave Portable Smart Motion Sensor for your home. This Z-Wave compatible device boosts the safety of your home by working with your home’s gateway to wirelessly trigger scenes and send alerts to your smartphone or tablet whenever motion is detected.

3.7 out of 5 stars
3.7 out of 5
103 customer ratings
How does Amazon calculate star ratings?
Amazon calculates a product’s star ratings based on a machine learned model instead of a raw data average. The model takes into account factors including the age of a rating, whether the ratings are from verified purchasers, and factors that establish reviewer trustworthiness.
Top Reviews

John D. Kelner
5.0 out of 5 stars Good value for the price
Reviewed in the United States on December 17, 2016
Style: Motion SensorColor: WhiteVerified Purchase
I have three of the other 'cheaper' sensors which work well enough. I thought I would spring for a GE. It is far more sensitive. I have not measured angles, but it seems to have nearly a 180 degree view side to side. The mounting hardware the provide is a nice plus (they provide a ball swivel). It uses TWO CR123 batteries though. The others use one. I am hopeful that this means longer life without changing them, but even if not, it seems MUCH more durable, better built and more sensitive to movement. It also provides a mini usbport for DC power, but it's hard to find a plug which has a plastic casing which is small enough to fit inside the device. You are supposed to put the back cover back on when wired (I guess so you can attach the swivel to the back cover), but it works so well on battery, I am not going to play with a plug - and then have to find a wire long enough to read a USB plug. I have it located in a place which is no where near AC power, so it's nearly perfect as far as I see it now. It's worth the extra few dollars for this one. UPDATE: Bought another one. This time I read the directions. They are a bit different to set up than the others. Found a plug and a long wire which fits inside it too. Minor issues with my own USB adapter 1.0a, but have it hooked up to a 2.1a one now and it's working fine. And the sensitivity is adjustable and there is a test mode too. I should have read the directions with the first one!
Read more
21 people found this helpful
Helpful
Comment Report abuse

Regina
2.0 out of 5 stars Does not work with Vera, it will pair but Motion Sensor does not work.
Reviewed in the United States on June 24, 2017
Style: Motion SensorColor: WhiteVerified Purchase
The product look nice and has a good design, but does not work with Vera. I was able to pair it but it would never trigger motion. The lights on the device would not go off and it never showed motion within Vera. I ended up returning this as it does not work at all as a motion sensor.
Read more
14 people found this helpful
Helpful
Comment Report abuse

Hudson H.
4.0 out of 5 stars READ IF YOU'RE HAVING ISSUES
Reviewed in the United States on December 1, 2017
Style: Motion SensorColor: WhiteVerified Purchase
So, I've had a love/hate relationship with this sensor, but I think we're back on good terms now. I'm using a wink 2 hub. First thing, this sensor ONLY detects movement every 4 minutes on battery. If that's not frequent enough for you, look elsewhere. I have this outside under the eve of my house. After dusk, if someone approaches, the lights turn on to 100%...but the cool thing is this sensor also tells the hub when it's no longer detected motion, so after 4 minutes, my lights dim again to 1%. I REALLY like that it also sends this message when motion has stopped.

When you first set up, keep in mind that you'll have to wait several minutes to test, so put it in a corner and leave it be. I set up a "robot" in the Wink app to send me a notification every time it detected motion AND every time motion stopped...soon enough I noticed it was sending a notification about every 4-6 minutes and my outside lights were going to 100% then to 1% every 4-6 minutes. HMMMMM what gives. I moved the sensor - NO CHANGE, SO HERE'S WHAT I DID:

UNPAIR THE DEVICE FROM YOUR HUB, then FACTORY RESET IT (press the button on the back 10 times in less than 6 seconds - you'll see the blue light come on for a few seconds), then follow the steps to reconnect.

It seems like what's happening is during setup is it's easy to change how the sensor communicates with the hub and you can change from the default "push" style notifications to "polled" notifications, where the sensor sends a status to the hub on a routine basis. In this state, the hub gets confused, and you see ON/OFF messages continuously. By resetting, you're ensuring that the sensor is communicating as intended, and I haven't had an issue yet. I believe there might be a small bug in the firmware, but if you pair it, have the issue, unpair it, factory reset, and re-pair - you hopefully will be good to know.

I'm still not sure exactly why this particular process works, but it worked for me and I'm guessing I just got lucky with the steps I took - but try this before returning - I hope it helps.

Enjuneer
4.0 out of 5 stars Pretty good, some quirks though.
Reviewed in the United States on May 31, 2018
Style: Motion SensorColor: WhiteVerified Purchase
I have two of these units already, and I ordered a third. However, I received a unit that was opened and had missing parts/signs of wear. Also, it was overnight shipping, and I received it two days late. So, admittedly, I'm irritated about that, but here's a relatively unbiased product review.

The units work great with my Z-wave hub (Wink 2) and operate almost painlessly. Pairing is simple, and you have to wait a day or so to get the procedure to stick proper sometimes. I'm unsure if that's due to the configuration flag organization of the headers in the radio setting on my Wink 2, or what, but these guys are a bit crabby sometimes. One seriouys con is, the battery life. I get about 2-3 months out of a set of cr123a's, so I switch these to USB/transformer line power when I can. I use on for my front door motion, and it's great, I have it turn on the outdoor lights when anyone is remotely close to our driveway even. Sometimes the sensor doesn't work as well as I'd like it to, but it seems to be related to the environmental conditions (temp, humidity, etc), and it will over trigger/throw false positives fairly often on the highest setting. We know they're false positives, because I put the thing in a box in an unoccupied and queit room and it continued to trigger motion. That unit was replaced and since have had no issues.

Bottom line is, they're decent sensors, but they are power hogs. I prefer the Dome unit over this one for form factor, but that unit is magnetic and someone could just walk up and take it. at least these units have a thread in base. The Jasco units are ok. My first purchase, I was able to get two of these units, one used and one new on auction for about $30, which is a steal, and I love them for that price. That's about a fair price for these too. Asking $40 a unit doesn't seem to make sense, but I suppose it's from all the licensing.
Read more
One person found this helpful
Helpful
Comment Report abuse
See all reviews from the United States

Page 1 of 1 Start overPage 1 of 1
This shopping feature will continue to load items when the Enter key is pressed. In order to navigate out of this carousel please use your heading shortcut key to navigate to the next or previous heading.
Back
Next
Pages with related products. See and discover other items: lighting motion sensor, 180 level, smart door, smart devices, smart home hub, smart home security devices