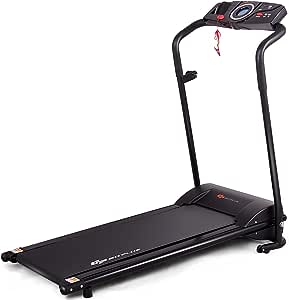 by Goplus
4.2 out of 5 stars 65 ratings
| 54 answered questions
Available from these sellers.

Don't have time to go to the gym? Is outdoor sports affected by the weather? Our high-quality, foldable and easy-to-operate treadmill allows you to enjoy a comfortable sports experience at home. Your home is your gym. Its folding size is about 9 "x 23" x 51 "(L x W x H), which is very suitable for small rooms. It is simple in design but involves all basic functions and has high cost performance. Don't hesitate to take it home!

4.2 out of 5 stars
4.2 out of 5
65 customer ratings
How does Amazon calculate star ratings?
Amazon calculates a product’s star ratings based on a machine learned model instead of a raw data average. The model takes into account factors including the age of a rating, whether the ratings are from verified purchasers, and factors that establish reviewer trustworthiness.

Katherine
5.0 out of 5 stars Works as expected
Reviewed in the United States on June 25, 2019
Verified Purchase
This compact treadmill is easy to use and work great for me. It’s foldable for space saving. I get it out when I need and put it in my basement when no in use. Great price.
Read more
82 people found this helpful
Helpful
Comment Report abuse

SonoraTop Contributor: Makeup
4.0 out of 5 stars A good walking treadmill for a small area
Reviewed in the United States on April 28, 2019
Verified Purchase
I bought this for the size, it's small, and the price. I only wanted to walk on it, so I didn't need anything w/a lot of bells and whistles. As far as the size goes, it has a short and narrow base, so it's a great size for an apartment. I absolutely, in my opinion, do not consider this a treadmill for jogging or running, it's just too short and narrow. Also, it says it's for up a 225 lbs, respect that. I was 205 when I started and I could tell it wouldn't have functioned well if I was much heavier.
I've been using this for a month now, 3-4 times a week, increasing my speed and distance.

I'm a female in my early 60's and was a regular jogger for decades. I stopped 2 years and 20 lbs ago and finally decided it was apparent the weight increase was going to continue, to it was time to get exercising again. I don't have room for a large, standard treadmill and I have downstairs neighbors, so walking it was going to have to be. You can see by my pics I have a stationary bike, but, I have to admit, though it is a good bike, I hate bike riding. Now that I am happily walking, I do get on the bike for a few miles after I'm off the treadmill. Right now I'm up to 2 miles in 40 mins and plan to increase. The weight is slowly coming off and I'm definately toning up. So the treadmill fulfilling it's intended purpose.

However, I have a couple of concerns about this treadmill:
1) It is small and was an economy purchase so it's no-where near a "substantial" piece of equipment. That said, be aware the narrow width of the walking surface means you have to be a steady walker, if you wander or wobble you will either end up stepping on the sides of the base and really falter, or you will advance forward onto the plastic cover at the front of the belt. I've been doing this a month now and have found my pace and an acceptable stride for this platform, but, I still occasionally wander and stepping on a stationary portion of the base will really send you off kilter. So, if you're not starting off w/a good sense of balance, get a bigger treadmill.

2) Because it is an economy treadmill, it is not built as sturdy as larger more expensive units. Just in this first month I have lost both rubber pads that were secured around two bolts under the front support rail at the base, and a long piece of plastic that covers the bolts on the side of the treadmill belt flipped off when I stepped on it during use. I didn't even know that had happened til I got off at the end of a walk, during which I had wandered a bit to the left while walking at a good clip. I had to really put effort into getting my balance back and somehow this plastic strip was popped off and flipped to the other side of the treadmill, landing on the carpet. The adhesive used to secure it over the bolts is not very grippy, at all. The manufacturer should do something about that. If it had hit while I was walking I may have really lost my balance and fallen off and that could have been all kinds of ugly.

I have folded it up a few times and it does that easily, also, it's light in weight so maneuvering it around is easy too. Someone else had mentioned it would have been better if the arms were higher, and I agree. During cool down I seem to need to hold on to the bars a bit as I adjust to a slower pace and the distance I have to lean forward is awkward; I'm of average height.

Over all, I am pleased w/this machine. It came out of its shipping box w/no problem and there isn't any noteworthy assembly. The little computer adjusts manually, as I prefer, to increase speed, it shows your time on the machine and distance you've covered, and it's well lit and easy to read. When I get off the machine at 2 miles, my GARMIN fitness watch tells me I've going 2.3 miles, so, it's pretty accurate.

It's an inexpensive, basic unit but, it should be better constructed to have a more secure, wobble free experience, and not to have parts come loose during use. If your used to a wide commercial treadmill or walking outside, the small base will take some adjusting too.
Read more

john
5.0 out of 5 stars exercise on the treadmill
Reviewed in the United States on July 10, 2019
Verified Purchase
no need to install, open the box , take it out, screwed tie, ready to go, so vaulable for light weight peoples,and it.has security key, keep it safe from my kids
Read more
55 people found this helpful
Helpful
Comment Report abuse

Amazon Customer
5.0 out of 5 stars small and quiet
Reviewed in the United States on February 6, 2019
Verified Purchase
we wanted a treadmill we could move around and store away. This fit the bill. We have been using it almost every day...
Read more
33 people found this helpful
Helpful
Comment Report abuse

valerie magnaghi
5.0 out of 5 stars love it
Reviewed in the United States on June 11, 2019
Verified Purchase
I love this treadmill do not pay to assemble there is nothing to assemble
Read more
27 people found this helpful
Helpful
Comment Report abuse

Joy
5.0 out of 5 stars Just what I was looking for
Reviewed in the United States on July 15, 2019
Verified Purchase
I’m a 80 year old lady ... I assembled it myself , I can slow walk on it , Love it .... at first I was going to return it instead I decided to open the box ... so glad I did .
Read more
21 people found this helpful
Helpful
Comment Report abuse

j
4.0 out of 5 stars I would buy it again
Reviewed in the United States on March 22, 2019
Verified Purchase
Don't need any tools takes 2 seconds to set up very light gave it four stars because you get what you pay for but it is very cheap as far as the motor strength
Read more
13 people found this helpful
Helpful
Comment Report abuse

Superstar CK
5.0 out of 5 stars Great treadmill for the price and convenient
Reviewed in the United States on October 8, 2019
Verified Purchase
The product arrived at great condition and on time. I just gave birth to twins, during my postpartum, get back in shape is one of my priority goals. I decided to buy treadmill to excises at home. I am so glad bought this one. The assembly is easy for me, I am not handy person. I put it together in 15 minutes. I use this treadmill daily about 30 -45 minutes. It’s awesome. In the last close to 30 days, I lost 10 pounds with Combined healthy Eating. It’s nice build and solid. It’s pretty quite while I run on it, I was able to watch videos without any problem. The control panel is user friendly. Easy to use. My only suggestion for upgrading, I hope it can be a bit wider. I guess I use to the machines in the gym, but this treadmill gave me options exercise at home. It’s so convenient. I can watch my babies while I am exercising. The price point is great, under $300 you can’t go wrong with this treadmill. It will save me hundreds dollars per year instead gym membership. It’s foldable. It’s a space saver. Overall great product especially for the price!
Read more