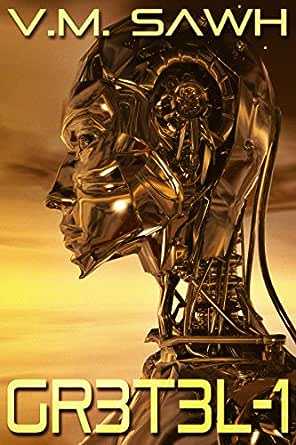 You've subscribed to Good Tales For Bad Dreams! We will preorder your items within 24 hours of when they become available. When new books are released, we'll charge your default payment method for the lowest price available during the pre-order period.
Update your device or payment method, cancel individual pre-orders or your subscription at
Your Memberships & Subscriptions
There was an error. We were unable to process your subscription due to an error. Please refresh and try again. 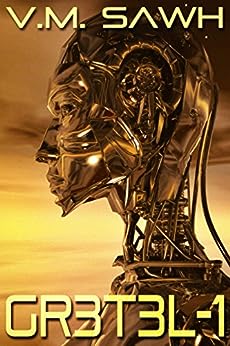 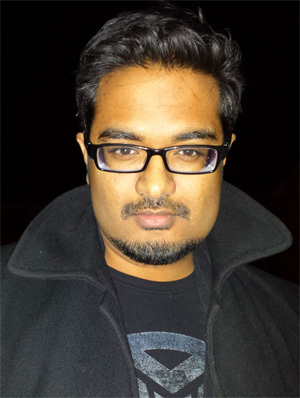 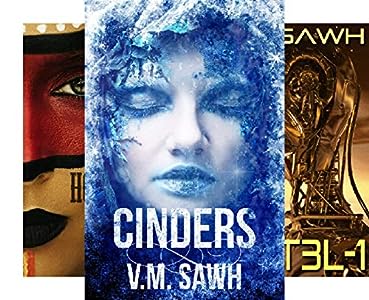 "I enjoyed this story immensely... GR3T3L-1 has ambitions far greater than the retelling of old Germanic folklore. Through its two main characters, it presents a dichotomous view that resonates with important modern issues of robotics and the nature of the soul."
- From dhaller's official OnlineBookClub.org review of "GR3T3L-1" by V.M. Sawh.

"GR3T3L-1: Good Tales for Bad Dreams by V.M. Sawh provides an imaginative retelling of the Hansel and Gretel fairytale with a futuristic twist...V.M. Sawh's greatest accomplishment lies in his masterful juxtaposition of clichéd roles. What survives and remains implanted within the satisfied reader is the noble human spirit at its best."
- Joel R. Dennstedt, Readers' Favorite

"These. Stories. Are. So. Damn. Good. They're brutal, cutting, graceful, and haunting, but most importantly, they are stunning. They shimmer with mastery and reflect reality. THIS is how to write novellas. Take notes, people. These stories demand to be read and recognized... I am thrilled to have these novellas... and will forever treasure them."- Red Raven Reads

V. M. Sawh takes a childhood tale of a boy and girl, Hansel and Gretel, abandoned in a forest by parents who couldn't care for them - the children find their way back home following bread crumbs - and retells it with contemporary and futuristic variations that lend excitement, anticipation, and adventure. He transforms a rather frightening fairy tale into interesting science fiction.

The storytelling within is seamless despite numerous flashbacks. Robots are the protagonists, and they fit gender-identifiable roles. The plot is reminiscent of the age-old balance between creation and destruction, communication and conflict, though it isn't a balance as much as a death struggle in GR3T3L-1. The author is adept in his explorations of consciousness and sentience.

Nevertheless, I thought the work somewhat ambitious in the number of aspects it captured...for instance, robotic sentience explored within included emotions and desires of motherhood. Alien consciousness reflected very human quests. A credible synthesis of such aspects is missing. But that takes little away from a reader's enjoyment of the story.

I sought an emotional connection as I read the story. The author makes commendable efforts toward such resonance, but I thought it fell a bit short of such an experience.

All in all, an excellent work of science fiction recommended to all who enjoy the genre.
Read more
Helpful
Comment Report abuse

Jason P. Crawford
5.0 out of 5 stars GR3T3L-1: A unique and fantastic read. You won't regret trying this one! 4.75/5 by Beyond the Curtain of Reality
Reviewed in the United States on November 21, 2015
Verified Purchase
Today, I am reviewing the Science-Fiction story GR3T3L-1 by V.M. Sawh. The book opens with two robots, interestingly named H4NS3L and GR3T3L, crash-landing on a strange planet with no clear mission. GR3T3L quickly shows herself to have mental abilities far beyond the combat drone H4NS3L, including asking questions about feelings and emotions, and using reasoning to solve their problems.

This is an excellent book, filled with character development, interesting scenarios and environment, and intriguing plot. I give it a 4.75/5. Here is my breakdown:

Characters: 5/5. I really enjoyed both the main and supporting characters of this story. Both robots played their parts well, and watching their interactions and their development over the course of the book made me happy and made me care about them. The supporting human characters, met chiefly through flashback and recorded programming input, felt realistic and understandable, viewed as they were through the lenses of robotic understanding.

Plot/Storyline: 5/5. Engaging from start to finish. Sawh drops us in the middle of the action and pulls off the slow reveal with aplomb. Like the breadcrumbs from the titular characters’ original story, I was hooked from the beginning, wondering where we were going from here. I won’t spoil the ending, but I was reading it to work, and it made me tear up. It was good.

Flow: 4.75/5. Every reveal is timed well, keeping the reader interested the whole time. The language used is clean and effective, telling the story and maintaining the sense of immersion. My only stuttering point was at the beginning, when Sawh used the word “metal” like ten times. In the first page or two. It just made me shake my head and laugh a little.

Spelling/Grammar: 4/5. There were some typos in this book. Overall very good, but I did note a few missing words and misspellings.

Overall: 4.75/5. I knew going in that this was a solid piece of work, but as it went on it pulled me deeper and deeper. It’s not long, but it’s amazing and unique. I’ve never seen a book take on this perspective before, and not since R. Daneel Olivaw have I been as interested in what is going on in a robotic mind. Well done!
Read more
Helpful
Comment Report abuse

C. McMullen
5.0 out of 5 stars Right in the Feels
Reviewed in the United States on November 3, 2015
Verified Purchase
I've mentioned in previous reviews that I'm a huge fan of machine sentience. I'm not misanthropic enough to say that I like robots more than people, but there's something so innocent about an object's discovery of self-awareness. As such, even if I hadn't already already been familiar with Sawh's work, this (stunning) cover and title would have caught my eye. Still, after Cinders, GR3T3L had some mighty big shoes to fill (pun totally intended).

And did she ever. It's funny. I tend to read the reviews of books after the fact. Mainly this is to get an idea of what others have said and admittedly, it's somewhat to validate my own feelings by seeing if others agreed with my assessment. In this instance, I'm finding that what I liked most was that which others panned. GR3T3L deviates quite a bit from the original fairytale. To me, it hit enough points without becoming just another gritty reboot (though this might be the grittiest of these tales to date). And like the source material (and the greater sci-fi genre), it has a poignant message of caution.

About that message. Without spoilers, I should note that in my familiarity with the author's previous works, I was worried about the bleak direction a story of two robots stranded on an alien world might take. My worries were baseless. The landscape is bleak, and humanity is pretty awful, but Sawh's hand-delivered gut punches do not come without reward. I can't wait for the next bad dream.
Read more
Helpful
Comment Report abuse

B. Grant
4.0 out of 5 stars Wonderful SciFi Tale
Reviewed in the United States on July 22, 2016
Verified Purchase
Poignant story of both artificial intelligence and creating a meaningful life of peace when surrounded by warmongers and destruction. Seemed less a new version of the old fairytale (the alien as witch didn't quite work for me) but overall I didn't care as the story stood strong enough on its own thanks to the author's well-crafted tale.
Read more
Helpful
Comment Report abuse

Daniel
4.0 out of 5 stars More than just a re-telling
Reviewed in the United States on December 16, 2015
Verified Purchase
I love sci-fi, but haven't read much of it lately. This was a great return to the genre for me. I enjoyed the nod to the fairytale, but this really is a story with its own message. I enjoyed the interaction between the robots, and the author was successful in sometimes making me forget they weren't human. By the end of the story you may find yourself wondering exactly who is the soulless machine with no emotions?
Read more
Helpful
Comment Report abuse

Ronald Thompson
5.0 out of 5 stars GR3T3L-1
Reviewed in the United States on February 21, 2017
Verified Purchase
A great read , could not put it down , recommended read !
Read more
Helpful
Comment Report abuse

Kindle Customer
5.0 out of 5 stars What an interesting and awesome read!
Reviewed in the United States on January 26, 2016
Verified Purchase
This was one awesome novella! The thing that struck me most was the fact that it was written in the perspective of 2 robots (not 2 men). That made it totally interesting and unique and I suppose hard to write. Loved it! Another freebie bringing a new great author to me :)
Read more
Helpful
Comment Report abuse
See all reviews

Tony Deeney
5.0 out of 5 stars Good robot story.
Reviewed in the United Kingdom on November 12, 2015
Verified Purchase
First, I love robot stories! They provide opportunities for exploration of elements of humanity. This story is a very worthy addition to the genre.

The main characters are based on the story of ‘Hansel & Gretel.' As such the book forms part of the authors series, which features old stories and tales rewritten and retold with a new spin. Though, for me, this particular tale does not seem very close to the original.

The book opens with GR3T3L-1, a survey robot, and its ‘companion’ H4NS3L, a military droid. Both crash-land in crates on an unknown planet, with no clear record or instructions as to their purpose. Shortly, they encounter a ‘Salem,’ and as the plot unfolds, their history is backfilled each time they recall some memory file or find information.

GR3T3L, who has the more advanced ‘learning’ software, seems self aware and her self exploration forms a major part of the plot. The conflicts centre around their interaction with the Salem and differences in the agenda of H4NS3L and GR3T3L-1.

The book is well written and it is an easy, pleasant read with a few gripping scenes. Sawh describes the characters and scenes descriptively and colourfully and holds the reader’s attention with a mixture of action, conflict and self reflection.

Like all good robot stories, there is more than a little ‘humanity’ evident in GR3T3L and even in the brutish companion H4NS3L. This is what makes the reader care.

If you are into robot stories, or sci-fi in general, I recommend you add this book to your TBR pile (near the top).
Read more
Report abuse
See all reviews