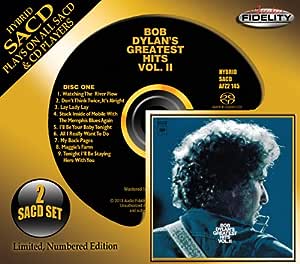 Bob Dylan agreed to release a second "greatest hits" compilation, provided he could compile it himself, issue it as a double album, and include several older compositions which he had written but never issued. Dylans first Greatest Hits collection included his most popular songs from the "60s," while this volume gathers most of the rest. "Bob Dylan's Greatest Hits Volume ll" is close to perfection. Five of the cuts are previously uncollected or unreleased. Three of them have been established as indubitable classics by other artists, and the other two begin and end the album.
There are sentimental romantic ballads ("Lay Lady Lay," "Tonight I'll Be Staying Here With You") and wordy rants ("Just Like Tom Thumb's Blues," "It's All Over Now, Baby Blue"). There are angry political rants ("Maggie's Farm," "A Hard Rain's A-Gonna Fall") and spiritually uplifting songs ("I Shall Be Released," "When I Paint My Masterpiece"). Dylan shows both his folkie side and his rock and roll side ane he's never been in better voice.
While the double SACD doew contain several genuine hits, it is largely comprised of album tracks that became classics, either through Dylan's own version or through covers that were big hits for other artists, including "All I Really Want to Do" (The Byrds), "All Along the Watchtower" (Jimi Hendrix) and "The Mighty Quinn" (Manfred Mann), but nearly all of Dylan's versions remain definitive.
The big draw, however, are the previously unavailable tracks unique to this edition: "Watching the River Flow," "When I Paint My Masterpiece," and "Tomorrow Is A Long Time" don't appear anywhere else and "You Ain't Goin' Nowhere" and "Down In The Flood" are different takes than heard on"The Basement Tapes"
The songs flow nicely almost exclusively alternating between electric and acoustic. Some are obvious choices, others unexpected pleasures.

4.7 out of 5 stars
4.7 out of 5
302 global ratings
How are ratings calculated?
To calculate the overall star rating and percentage breakdown by star, we don’t use a simple average. Instead, our system considers things like how recent a review is and if the reviewer bought the item on Amazon. It also analyzes reviews to verify trustworthiness.

mpage
5.0 out of 5 stars A Double Dose Of Dylan's Greatest Hits With Extras!
Reviewed in the United States on March 10, 2018
Verified Purchase
Here we are-a second volume of Bob Dylan's greatest hits on over two discs. This volume picks up from where the first one left off. Spanning from the final days of 1967 to the fall of 1971, the time of this compilation's release. Also featured here are early 60s to mid 60s classic that didn't make the first volume are surely welcomed here which is why this volume is a double disc collection not to mention a previously live track from 1963-"Tomorrow Is A Long Time" and three songs recorded specifically this release originally from The Basement Tapes back in 1967-"I Shall Be Released"; "You Ain't Going Nowhere" and "Down In The Flood" with Dylan accompanied by Happy Traum on second guitar, bass, banjo and harmony vocal. Also from that very year was the single "Watching The River Flow" recorded with Leon Russell on piano, Jesse Ed Davis on slide guitar, Jim Gordon on drums and Carl Radle on bass all of whom are also featured on "When I Paint My Masterpiece". Two songs are each featured from the albums John Wesley Harding and Nashville Skyline-"All Along The Watchtower"; "I'll Be Your Baby Tonight"; "Lay Lady Lay" and "Tonight I'll Be Staying Here With You", respectively. There is one song each from the albums Self Portrait and New Morning-"The Mighty Quinn(Quinn The Eskimo)" and "If Not For You". As for the other pre-1967 songs that are welcomed on this release are two songs apiece from The Freewheelin' Bob Dylan, Another Side Of Bob Dylan and Bringing It All Back Home-"Don't Think Twice, It's All Right"; "A Hard Rain Is A-Gonna Fall"; "All I Really Want To Do"; "My Back Pages"; "Maggie's Farm" and "It's All Over Now, Baby Blue". There's also one song each from the albums Highway 61 Revisited and Blonde On Blonde-"Just Like Tom Thumb's Blues" and "Stuck Inside Of Mobile With The Memphis Blues".
If this is some compilation then you'll agree. A wonderful mix of later Dylan songs as well as old favorites plus a few extras thrown in to make a great double disc compilation. If you love the first volume, you will twice as love this one too.

DanoTop Contributor: Bob Dylan
5.0 out of 5 stars More Dylan Etching's you should have in your living space ~~~
Reviewed in the United States on June 22, 2017
Verified Purchase
Bob Dylan. Ya hate him or ya love him. Not sure there is an "inbetween". For some of you "doubters" you might want to start with some of his later recordings. He has done some out of the Dylan realm type songs that may interest you. Me? HUGE FAN. Always have been. I have over 3/4 of his albums and still deciding what to get next. A singer - songwriter who has an Academy Aware, Presidential Medal of Freedom, and Nobel Peace prize, that made his roots grow in the tumultuous 60's ... probably has something you might relate to. This Volume II is another tribute to his early classics. You won't be disappointed
Read more
4 people found this helpful
Helpful
Report abuse

StrangerTop Contributor: Blues Music
5.0 out of 5 stars At last ...
Reviewed in the United States on December 7, 2019
Verified Purchase
I had this album some 45 years ago on vinyl. Not sure why I waited so long to update to modern technology, but it is worth the wait. Glad to have it again! Watching the River Flow is the first song here, and my favorite one on the album. I think this is the only place to find that song on any album.
If you like Dylan, then this is required listening.
If you are new to Dylan, a good place to start.

blue skies
1.0 out of 5 stars Very poor sound quality compared to Dylan's most recent remastered releases, avoid this!!!
Reviewed in the United States on December 6, 2018
Verified Purchase
This is a money grab by the record company. It was remastered in 1999 and very poorly. There is no depth or presence to the music. If you don't have a good sound system you may not care. Listening to this is like drinking flat soda pop-no fizz. Also, no need of 2 CD's would fit on one and there are no liner notes or details provided at all. In other words no effort on the part of the record company to provide a quality product. Columbia must have had a bunch of these leftover in the warehouse. Should have sent them to a landfill. Luckily one of the CD's would not even play-I returned it.
Read more
3 people found this helpful
Helpful
Report abuse

T. Casey
5.0 out of 5 stars Audio Fidelity SACD is the one to get!
Reviewed in the United States on June 13, 2013
Verified Purchase
I wish the reviews for each release of an album could be separated. There are a lot of reviews for this particular Dylan collection, but none pertain specifically to the new Audio Fidelity SACD mastered by Steve Hoffman. So here goes:

I just listened to the stereo SACD layer, and I was admittedly a bit disappointed. Still, it's a great album, so I heard it all the way through. I switched over to the CD layer and skipped through, and the sound was very similar to the SACD layer.

Then I played the remastered Sony CD from a couple of years ago. It sounded awful compared to this SACD! So curiousity made me put on the original Columbia CD from the nineties, and that was unlistenable. Man, I can't believe I used to listen to that disc constantly. I guess my ears have improved with time.

The point is, these recordings aren't perfect, but Hoffman definitely nailed the mastering on this one. This is as good as it'll ever be - full frequency response, nice detail. There always seems to be one or two things in the mixes that bother me, but those annoyances are minimized in this edition. And again, the detail is staggering.

Buy this before it's gone, which will probably happen very soon.

J. Anderson
5.0 out of 5 stars Must have for Dylan fans!
Reviewed in the United States on December 12, 2019
Verified Purchase
This is more than just a collection of greatest hits there are some alternate versions and some songs on here that don't appear another record so it's well worth the purchase
Read more
Helpful
Report abuse

Jon M
4.0 out of 5 stars Early Dylan at his best.
Reviewed in the United States on August 16, 2019
Verified Purchase
Great CD. As a Dylan fan am happy. Not as good as greatest hits # 1 but still a must have.
Read more
Helpful
Report abuse
See all reviews

miss kitty
5.0 out of 5 stars BOB DYLAN VOL 2
Reviewed in the United Kingdom on May 15, 2014
Verified Purchase
What can anyone write new about Dylan's music that hasnt been written already? Well here i go another collection of greatest hits and many of the songs i knew from pervious albums but one of songs i did'nt know was (Tomorrow is a long time) any of you who are fans of the tv smash The Walking Dead will know this song is used at the end of the very last eipsode of season 1 and Elvis also covers this song which is suberb Dylan stated this was his favourite song cover. But of course there's plenty of other great songs here such as When i paint my masterpiece, Tonigh i'll be staying here with you. Maggie's farm etc. A great add on to my Bob Dylan collection..
Read more
2 people found this helpful
Report abuse

Peter Wintle
4.0 out of 5 stars Full of gems
Reviewed in the United Kingdom on February 26, 2014
Verified Purchase
A double album of Dylan hits has to be good, but this is especially so because it's got some stuff not on other albums. Especially Watching the river flow. I got it to replace my worn out old tape version. Note: it was originally released as More Greatest Hits - not sure why they changed the name.
Read more
2 people found this helpful
Report abuse

Corryne Prentice
4.0 out of 5 stars Very good
Reviewed in the United Kingdom on June 8, 2020
Verified Purchase
another to my collection
Read more
Report abuse

leslie1
5.0 out of 5 stars Five Stars
Reviewed in the United Kingdom on December 12, 2016
Verified Purchase
buy it!!! if your are a dylan fan or not/great service/thanks
Read more
Report abuse