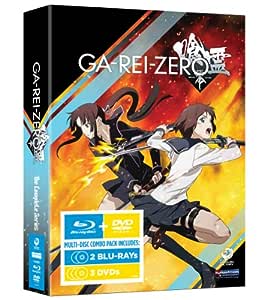 The creative team behind the Full Metal Panic! trilogy is back with a nightmare-inducing series about teenage exorcists forced to draw swords against bloodthirsty creatures of unholy origins.

Kagura and Yomi may look like ordinary school girls as they walk the streets of Tokyo clad in short skirts and knee-high socks, but they’re the heroes you scream for when monsters creep out of the darkness. These sword-totting sisters are part of an elite counterattack unit that specializes in suppressing outbreaks of supernatural activity. They train together, live together, eat together, and spend their nights disemboweling demons with sacred blades. Tragedy strikes when Yomi is possessed by a dark spirit, and Kagura must choose between raising her weapon against the eerily familiar face of ultimate evil – or watching her flesh and blood slaughter innocent citizens. In a life or death battle that pits sister against sister, survival may be the greatest agony of all.

Ga Rei Zero (2008) is a dark, supernatural adventure, based on a manga by Hajime Segawa. Fate and heredity dictate that teenager Kagura Tsuchimiya must become a Vanquisher, a member of an elite core dedicated to fighting supernatural monsters that menace Tokyo. During their training, she and Yomi Isayama adopt each other as sisters, sharing secrets and Pocky Sticks. But Yomi is seduced by a mysterious boy who offers her a "Bane Stone," an enchanted gem that increases her powers but devours her soul. Inevitably, she and Kagura must meet in a duel only one can survive. Although the tone, theme, and characters in Ga Rei Zero recall numerous other anime series, the story is hopelessly muddled and badly told. It's difficult to keep track of the cast, as the filmmakers keep offing characters they've just introduced: Ga Rei Zero has a body count approaching Hellsing's. Kagura, who fusses and whines, even when her life is threatened, is hardly an endearing character, and Yomi looks and sounds like someone from Anime Central Casting. After 12 episodes, the audience has no idea who the evil boy with the Bane Stones is, why he's always surrounded by blue butterflies, or why he's out to cause so much trouble. With no sequel on the horizon, viewers may never find out. (Rated TV MA: graphic violence, violence against women, grotesque imagery, nudity, tobacco use) --Charles Solomon

4.6 out of 5 stars
4.6 out of 5
115 global ratings
How are ratings calculated?
To calculate the overall star rating and percentage breakdown by star, we don’t use a simple average. Instead, our system considers things like how recent a review is and if the reviewer bought the item on Amazon. It also analyzes reviews to verify trustworthiness.
Top reviews

Jeff
5.0 out of 5 stars short and sweet
Reviewed in the United States on January 27, 2011
Verified Purchase
I watched this show a while back when it appeared on hulu and overall was very impressed. I went into this knowing absolutly nothing about the original source material and what I found was a concise and satisfying storyline with excellent animation. Like all anime this show does contain some elements that are a little outlandish, one scene in particular towards the end of the series was completely ridiculous, but this aspect is kept to an absolute minimum. Where Garie Zeros really hits is in the emotional impact of the of the bonds formed between the two main charcters and the horrible realities of the events surrounding them. Although the conclusion becomes obvious before the end arrives, and some holes are left open leading into the manga, this is easily one of the most streamlined stories I have encountered in recent history. In short this is a good show for anyone looking for a show that delivers both intense action and a excellent character devolpment without the commitment of a long series held down by filler and other useless side material.
Read more
38 people found this helpful
Helpful
Comment Report abuse

Carlos Lopez
5.0 out of 5 stars Ga-Rei-Zero
Reviewed in the United States on October 28, 2019
Verified Purchase
The dubbed was perfect and the anime series was perfect. It took me a long time to remember the title, but when I remembered it, the wait was worth it. The reason why I couldn't remember the title was because I first saw it at Netflix and eventhough they showed the title, I couldn't remember it.
Read more
Helpful
Comment Report abuse

Anime Lover
4.0 out of 5 stars Wrap it up read a book
Reviewed in the United States on October 12, 2020
Verified Purchase
The was a Fun very unexpectedly gruesome anime. The negative is the ending. New character show up wham bamm roll credits. I don't consider this a go read the manga ending but it is highly warranted if you want closure.
Read more
Helpful
Comment Report abuse

KevinB
5.0 out of 5 stars Good Grief it's sad!
Reviewed in the United States on September 30, 2012
Verified Purchase
The city of Tokyo is under attack by monsters. That's no surprise, isn't it always. Fortunately there are 2 hot young ladies that won't stand for it. Kagura and Yomi both come from families with enormous responsibilities. Battling evil with their spiritual powers. They form a bond of sisterhood and live to protect each other from the evil lurking in the darkness. But a light that shines so brightly attracts attention of a dark shadow. Immense tragedy befalls the 2 sisters and destroys their lives. I was really upset over the awful things that happen to them. But I was impressed by strength of their love. I really enjoyed watching Ga-Rei-Zero but Good Grief it's sad.
Read more
2 people found this helpful
Helpful
Comment Report abuse

Sekirei 1990
5.0 out of 5 stars Great Series... Nice packaging
Reviewed in the United States on January 16, 2013
Verified Purchase
The series was absolutely wonderful to watch. I'll admit I was a little teary eyed when Yomi and Kagura were in the hospital. I felt bad for Yomi when she tried calling out for Kagura and couldn't and she was constantly typing on her cell phone that she was sorry. I loved the series and would recommend it to anyone. The packaging was Funimations first at blu-ray DVD release with a nice box. Sadly the box wasn't chipboard like they use nowadays but still nicely done.
Read more
2 people found this helpful
Helpful
Comment Report abuse

Kiltmaker
3.0 out of 5 stars Good, but Depressing
Reviewed in the United States on December 13, 2011
Verified Purchase
The animation in this show is top notch, and the visuals are engaging. There is lots of relationship going on among the main characters. That said, it is also very depressing. Every episode begins with the question "Will you kill person you love because you love them?" so I am not really giving any spoilers here. They spend the entire series developing the relationships and showing you that the people love one another. Then they have to turn around and chop the others to bits because they are possessed by evil spirits. All the violence happens on screen, so you see a lot of blood, sword cuts, and limbs being cut off. In the end, the person who is causing all this trouble and releasing the evil spirits isn't even caught. I supposed that that leaves the door open for a sequel.

I just looked at the Amazon header at the top of the page for this and it says that it is rated G. Don't believe it. It should be rated R.

NicVas
5.0 out of 5 stars its a good anime
Reviewed in the United States on April 9, 2019
Verified Purchase
go watch it stop reading this
Read more
Helpful
Comment Report abuse
See all reviews