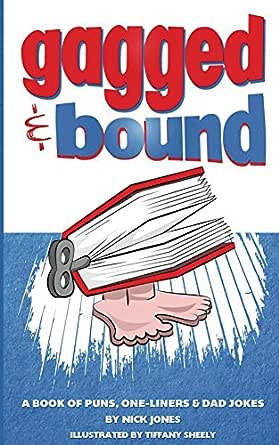 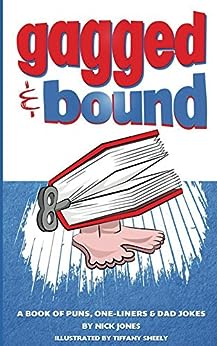 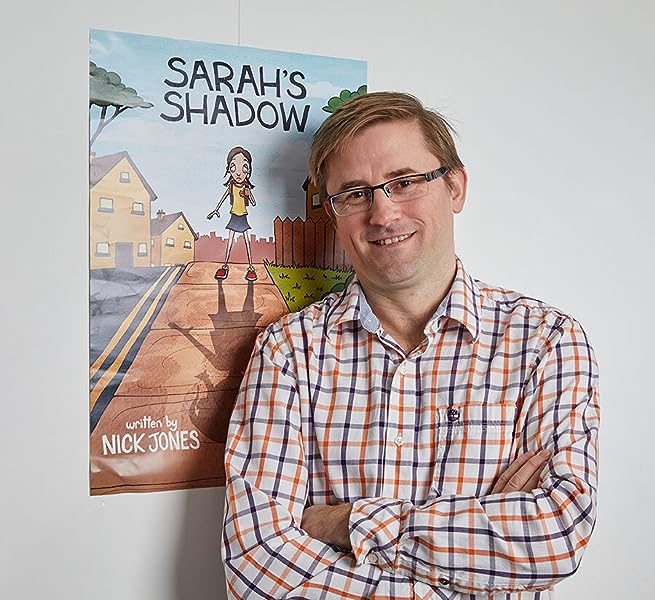 Gagged and Bound: A book of puns, one-liners and dad jokes Kindle Edition

"It's what it says on the tin: a succession of one-liners, puns and dad jokes going at your laughing muscles in a joyously pell-mell, headlong way. It's irresistible. Honest." - Jill Murphy, The Bookbag

"I would recommend this book to anyone looking for a joke book that's varied and full of easy one-liners." - Reader's Favorite --This text refers to an out of print or unavailable edition of this title.

Nick Jones has been getting big laughs on the circuit for a few years now. But when he isn’t out running, he likes to write jokes. Nick is a proofreader and copywriter. He lives in Cheshire with his wife, son and three cats. --This text refers to an out of print or unavailable edition of this title.

4.0 out of 5 stars
4 out of 5
77 global ratings
How are ratings calculated?
To calculate the overall star rating and percentage breakdown by star, we don’t use a simple average. Instead, our system considers things like how recent a review is and if the reviewer bought the item on Amazon. It also analyzes reviews to verify trustworthiness.
Top reviews

Where the author lost me in a few places was on some of the British-specific humor, and there’s a good bit of that included. Having traveled widely (including trips to London), I did get a few of them like, “Do you want to buy my brewery off me? 100 grand, no vat.” But most Americans would have no clue what a Value Added Tax (VAT) was. Other jokes reference the British healthcare system (going private) and a number of “football” players who would also be unknown to those of us who consider “football” to be “grid iron”.

So basically, I definitely recommend this book to readers who understand British English and pop culture references. If your idea of international culture is Epcot, that’s probably not you….

And FYI – while “dad jokes” might appear in the title, this is NOT a family friendly joke book. While it’s not gross, there are definitely jokes based on sexual innuendos that you probably won’t want to have to explain to your kids. (For instance, “vajazzle”. If that one’s not already in your vocabulary, it’s one of those words that you Google and then go, “Oh, myyyy……)
Read more
One person found this helpful
Helpful
Comment Report abuse

Glen Barrera
5.0 out of 5 stars A truly funny book that had me laughing out loud before I ...
Reviewed in the United States on December 20, 2014
Verified Purchase
A truly funny book that had me laughing out loud before I finished the Introduction. What struck me first was that the material is original. I hadn’t read or heard any of Jones’ pieces before – which made each pun, one-liner and dad joke a new experience. The puns alone were taken to a high level. And yes, there were a couple of groaners. You know, the kind where your spouse/friend rolls his/her eyes, but still laughs? But then, to me, that’s also part of the pun’s appeal. Many of the one-liners were downright clever, sometimes leaving me a second reading before the light bulb flicked on. The payoff, however, was always worth it. As Jones suggests, I read this in short bursts over a few days. While doing so, I thought it interesting that I could return to prior pages and still get the same laugh as I did the first time. I believe that’s the mark of a good joke book. I’m recommending this one.
Read more
6 people found this helpful
Helpful
Comment Report abuse

Tania Elizabeth
5.0 out of 5 stars A great way to get your giggles on ;)
Reviewed in the United States on January 9, 2015
Verified Purchase
Well, this was definitely one of those books that my kids and I could enjoy together. A great way to end our nights.
My son is in his early teens, and I can guarantee that some of the jokes shall find their way into the lunch time shenanigans. Granted, even I found myself in cackles of laughter at times. And that's saying something. Trust me, it takes a bit to get me started.
Original, well executed, and bound to hit that comic chord in any who enjoy a good old chuckle - the clean way.
Read more
4 people found this helpful
Helpful
Comment Report abuse

Fiction Author Rhoda D'Ettore
4.0 out of 5 stars Belly ache through laughter is the best medicine!
Reviewed in the United States on March 21, 2015
Verified Purchase
Since mother nature played a joke on me this weekend by dumping a bunch of snow in Springtime, I figured I would stay in a read something funny. This book is quite amusing with many one liners and even willy illustrations that are jokes themselves. There were a couple that had me scratching my head, but I assumed they are UK references.. and being an American I am not privy to the punch line.

If you want a nice read to put a smile on your face without being utterly offensive-- then you found your book.
Read more
One person found this helpful
Helpful
Comment Report abuse

Kindle Customer
5.0 out of 5 stars Good for a laugh or two
Reviewed in the United States on May 30, 2015
Verified Purchase
I selected five stars because the jokes in this collection were funny in an off centered away. I don't know much about this author but I get the impression he is British. Now that is not a problem for me because I like the way British humor goes. Now this not a long book, but you will get a laugh or two from it. A person would have to be without a sense of humor not to find something funny in this book. Just remember that it makes reference to British ideas.
Read more
3 people found this helpful
Helpful
Comment Report abuse

Stephanie
5.0 out of 5 stars Funny Punny Times!
Reviewed in the United States on November 15, 2014
Verified Purchase
A friend recommended this to me, and it's worth every cent. It's full of hilarious and groan-inducing and clever and dumb and fun fun fun puns and jokes. Page after page, you just think to yourself, "I wish I'd thought of that! Ha!" Totally a cute gift or fun read for you.
Read more
2 people found this helpful
Helpful
Comment Report abuse

KMasi
5.0 out of 5 stars Cute Little Book
Reviewed in the United States on January 10, 2016
Verified Purchase
Cute and silly jokes, bought this for my fiancé and he loved it!
Read more
Helpful
Comment Report abuse

Lydia Walton
4.0 out of 5 stars Laughed Until I Cried
Reviewed in the United States on February 11, 2016
Verified Purchase
I'm American, so some of the British spellings threw me for a loop, but the jokes are humorous and now my friends will know no mercy. XD
Read more
2 people found this helpful
Helpful
Comment Report abuse
See all reviews

Lesley Hayes
5.0 out of 5 stars An excellent pick me up
Reviewed in the United Kingdom on March 22, 2015
Verified Purchase
I took this with me when I went to have tea with a friend, and it was even better sharing the jokes, although I'd already had several outbursts of laughter on the way (slightly repressed as we English tend to control our merriment in public). Some are smilers, some are groaners, some are sniggers, some make you wince, and some are real laugh out louders. Witty, clever (I love the word play ones) and just plain daft in some instances. I'm so glad I've got it on my kindle so any time I'm feeling weighed down and Eeyorish I can open it up and remind myself how absurd life really is. Thank you, Nick Jones. A treasure.
Read more
4 people found this helpful
Report abuse

carl
4.0 out of 5 stars Thoroughly enjoyable way to pass away the time
Reviewed in the United Kingdom on April 28, 2015
Verified Purchase
How do you write a review of a joke book? This isn't one of the jokes, sadly I lack the imagination for such material. Personally I would be mesmerised by the title Gagged and Bound and would eventually spontaneously combust in my failed attempts to write a fifty shades of grey style joke. So its best i stick to a review rather than trying to compete with what is a thoroughly enjoyable collection of witty sharp jokes.
Perhaps a predominate influence is the stand up of Tim Vine as many of the jokes follow that dry, witty observation on the multi uses of words and phrases. So I would say if Tim Vine is your thing then this is definitely for you.If you prefer the crazed impulsive energetic ramblings of a Ross Noble its probably still for you. In short its got something for everyone including miserable gits like myself
Read more
One person found this helpful
Report abuse

lovereading
5.0 out of 5 stars Hours of fun.
Reviewed in the United Kingdom on April 16, 2015
Verified Purchase
Bought this for my 'nearly' teenage kids, and they loved it.

Plenty of funny, and cringe-worthy, jokes to keep you entertained for hours, and I mean hours! lol

John Dinner
5.0 out of 5 stars A very dry book, read with plenty of water.
Reviewed in the United Kingdom on March 14, 2015
Verified Purchase
From the diabolical to the inspired. This book was made even better by the fact that the voice I hear in my head when reading something is that of comic legend John Cleese. When reading, you flick between the 'uncle' at the wedding who's had one-too-many and is rattling out the cringeworthy, try-hard jokes, and the effortlessly witty fella down your local boozer whose name you're not entirely sure is Clive who you wish, so very desperately, to be as funny as. However, when attempted you discover you can't correctly deliver punchlines with the correct timing or vocal inflection. This will lead to the "...good one" pity laugh with accompanying pat on the upper arm. Psychologically, this is the person pushing you away and shunning you from further social interaction. So, this book whilst very funny could be over analysed and lead to severe social disfigurement, causing you to sell your house and move to Easter Island because that's where all the chocolate lives.
Read more
2 people found this helpful
Report abuse

Penny
5.0 out of 5 stars Good fun
Reviewed in the United Kingdom on April 6, 2015
Verified Purchase
I dipped into this book and read ten to twenty jokes at a time. I was quite dubious about reading a joke book to start with as I thought I’d read the same old jokes - not so. There are a lot of original jokes and anecdotes within the book. The quality of the illustrations is good and suits the book.
I enjoy having this book on my kindle and have even shared one or two of the jokes with my friends. Very enjoyable!
Read more
2 people found this helpful
Report abuse
See all reviews