You've subscribed to Inheritance Trilogy! We will preorder your items within 24 hours of when they become available. When new books are released, we'll charge your default payment method for the lowest price available during the pre-order period.
Update your device or payment method, cancel individual pre-orders or your subscription at
Your Memberships & Subscriptions
There was an error. We were unable to process your subscription due to an error. Please refresh and try again. 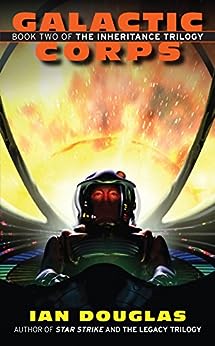 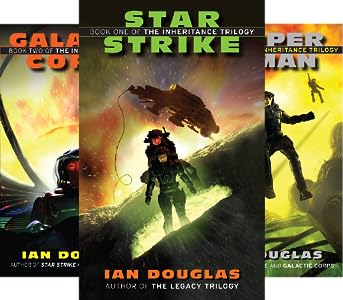 “Well researched and quite imaginative.”

Ian Douglas is the author of the popular military SF?series The Heritage Trilogy, The Legacy Trilogy, and The Inheritance Trilogy. A former naval corpsman, he lives in Pennsylvania.

4.4 out of 5 stars
4.4 out of 5
98 global ratings
How are ratings calculated?
To calculate the overall star rating and percentage breakdown by star, we don’t use a simple average. Instead, our system considers things like how recent a review is and if the reviewer bought the item on Amazon. It also analyzes reviews to verify trustworthiness.
Top reviews

JJCEO
#1 HALL OF FAMETOP 1000 REVIEWER
4.0 out of 5 stars The Xul had a plan for inter-species wars, leave the other species extinct!
Reviewed in the United States on November 10, 2012
Verified Purchase
This is the eighth book of this series I have read and I have enjoyed them all. There are a few issues that tend to get on your nerves as a reader like the always having to go through Marine boot camp but overall I like this writer and his books. It is hard to find really good new Sci-Fi from new authors, I started reading Sci-Fi over 50 years ago and I got spoiled by the books by the original masters of the genre. Ian Douglas at times is very close to their level and quality of story and writing.

I love his details into the technology and into the strategy of the battles, both in space and on the ground. His insight into science and of the galaxy is very good and it lends realism into the storyline. His imagination is spectacular and his ability to put it all down into words has kept me intrigued for many hours of enjoyable reading. His Marines have moved into using gear much like that of the book Starship Troopers by Robert Heinlein.

I just purchased the ninth book of the series and I hope it continues with a good storyline. This book is a four star rating and it could have been a five star except for a few things.

* Let's stop going to Marine boot camp in every book.
* Do all the characters have to be related for almost 800 years?
* If all of the government officials are such idiots in the future, maybe the Marines should take them out after they finish with the Xul.

These three items as listed above make the books too repetitive and it is just so much filler in the books. Please don't get me wrong, I would still buy the books and read them as I did enjoy them all but the entire series so far has been a four star and it could have been a five star.

I will certainly be looking for more books written by this author and spending more money on his books. I recommend this one to you.
Read more
Helpful
Report abuse

Chris M.
4.0 out of 5 stars Fully developed, but somewhat encumbered.
Reviewed in the United States on July 18, 2013
Verified Purchase
Any fan of Douglas will not be disappointed in this saga as a novel, but there are some difficulties: the excessive recap of past action from the preceding novel puts a dual drag on this one as Douglas reverts to large sections of flashback to bring the reader up to date. This includes individual episodes (Ramsey, Warhurst, Garroway) as well as complex backstory regarding the millennium-long history of Douglas's carefully crafted world, and the painstaking details of science and physics that go with it.

The characters are carefully and faithfully portrayed, no easy feat, but there is an undercurrent of implausibility in some machinations of character situations (suddenly Ramsey is an officer and an experienced fighter pilot? Warhurst comes out of retirement in a Caligula-worthy fleshpot--to reemerge on the front lines with 1 MIAF?).

Nonetheless, the Xul threat is credibly spun and resolved and overall, this is a must-read for fans of epic sci-fi and space tales.
Read more
Helpful
Report abuse

G Fair
4.0 out of 5 stars Mixed feelings about an excellent novel
Reviewed in the United States on June 15, 2009
Verified Purchase
I've bought and read all eight of the very well-written books from this series. As a physicist and sci-fi fan, I give it two very big thumbs up. As a former Marine (never ex-Marine), I love the characters.

BUT, as a Christian, I take exception to the condescending and twisted view that the author has of faith. It is not that he simply slides in an unintended reference to his own atheistic (or naturalistic?) viewpoint; he goes to great lengths to first create his own alternative story of creation, and then use his fictional history to prove the idiocy of those who believe in a Christian God. He does also explore the beliefs of wickens and other pagan belief systems, but those, he seems to feel, are reasonable in that they make the character feel good about their world.

I don't expect science fiction to support or encourage belief. This author, though, consciously ridicules belief and presents a corrupt and twisted church. As a scientist, I am often amazed at how many "intellectuals" assume that science disproves Christianity, or even that to pursue science requires one to first deny the existence of God. Yet I know so many physicists, biologists, and engineers who are among the most brilliant men and women I know who are convinced our faith and scientific pursuits are totally complimentary.

Why then, do I still give the book four stars? Because it is a very well-written space opera.
Read more
3 people found this helpful
Helpful
Report abuse

SWKW Enterprises LLC
3.0 out of 5 stars Getting Repetitive
Reviewed in the United States on November 28, 2008
Verified Purchase
I've read all the books up to and including this latest. While I like the alien encounters and technology advancements they take too much of a backseat to a few things that take up nearly every book.

1) Training of Marines. I don't want to hear about it and read it for the 8th time.

2) Fighting on the ground - Boring and the same in every book. The fighting decisions from the ships are more interesting.

3) XUL - Why just focus on them. We've met other races ... took their technology and now we don't include them? Boring. And the XUL are just too easy considering their technology.

These could be all great books but he puts too much repetitive filler in each one of them.
Read more
18 people found this helpful
Helpful
Report abuse

ONOFRIO MARTINO
4.0 out of 5 stars Feels like Science Fact
Reviewed in the United States on May 20, 2014
Verified Purchase
This is another very good book from Ian Douglas (not the author's real name). The story is similar to many of the others before, but I don't seem to get tired of them. More interesting are the ideas and concepts that Ian gets from the real world of quantum mechanics and math. I have followed up on many of these and they open a new world of exploration. Keep reading these books because they are food for your mind.
Read more
Helpful
Report abuse
See all reviews

Texxy
4.0 out of 5 stars Last line....
Reviewed in the United Kingdom on January 3, 2014
Verified Purchase
Great second book that lost a star because of the last line, what was the writer thinking. I hope the next book resolves the issue.
Read more
Report abuse

N. F. Tate
5.0 out of 5 stars Galatic Corps.
Reviewed in the United Kingdom on November 25, 2011
Verified Purchase
A very exciting and sometimes gory story. The humans involved must be very advanced to stand up to this sort of treatment. Overall and very good read.
Read more
Report abuse

Mr. R. Davies
5.0 out of 5 stars exciting read
Reviewed in the United Kingdom on March 10, 2014
Verified Purchase
An enjoyable story that is a real page Turner i highly recommend it if you like military science fiction, excellent
Read more
Report abuse
See all reviews