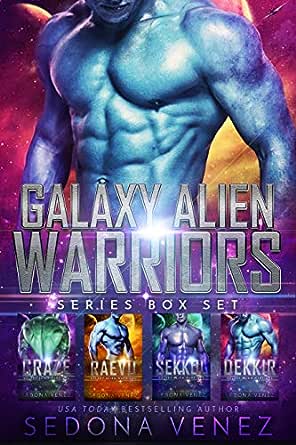 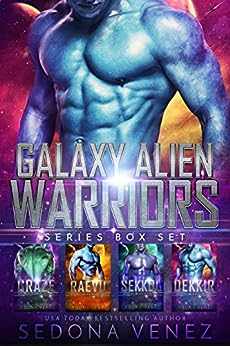 Emily Pennington
TOP 500 REVIEWER
5.0 out of 5 stars Great Collection of Alien Stories !!!
Reviewed in the United States on August 3, 2019
Verified Purchase
This alien sci-fi abduction romance box provides steamy romances in four terrific books, which include: Craze, Raevu, Sekkol, and Dekkir. Below is a sample of one of the books you will find in this set:

*** Reviewing “DEKKIR” ***
Grace Bryant was performing her first life drop landing on planet Lyra and her heart was pounding. This was the start of her two-year mission on the cultural evaluation of a species. Her instructor, Dr. Stirling, used the automated-descent time to brief her more fully on what to expect of the inhabitants below. But as they prepared to land, a huge green tentacle from a beastvine reached out and grabbed the ship! Fortunately, Dekkir heard the crash and came to rescue her. But they were still in danger of predator attack and had to move quickly out of the area. They walked to the place where Dekkir’s flying mount, Keer, waited. Unexpectedly, the creature seemed to like Grace and when she settled back into Dekkir’s arms, he was fairly sure she may be his destined mate!

While Grace went to the roof to think about things, a silver swarm of large insects flew toward her. The warriors defended the city, but during the attack, their High Chieftan was attacked by a metal insect – known to Grace as an assassination drone that had been sent from Lyra’s moon where the humans were. Someone was trying to sabotage the treaty she was working for. She is put on trial where it is discovered that she was to take the blame for this attack. Who was trying to stop the peaceful mission. Would they succeed? Would Grace eventually fall in love with the honorable alien? Or would a war erupt between humans and Lyrans?

These books will keep the reader thrilled with their fast-paced story lines, combining all the twists and turns and suspense it takes to carry the reader along to the HEA! I thought the characters were well-depicted, the women being strong personalities and the males smart, powerful and sexy, easily likable and believable. The reader will be cheering them on to overcome any difficulties as they try to find the happiness and love they are looking for.

This is a really good collection that the reader will definitely enjoy. Don’t miss this wonderful assortment, all gathered in one place for your enjoyment!
Read more
5 people found this helpful
Helpful
Comment Report abuse

Terry
5.0 out of 5 stars Amazing Stories
Reviewed in the United States on June 27, 2020
Verified Purchase
Wonderful series of four books. It is a series only in the fact that it is a bundle. Each book is an individual story, with its own characters and storylines and a happily ever after. I wish I could pick a favorite, but each story had wonderful characters, major alpha Alien males, and strong human females. There are bad guys you love to hate. Each story is well detailed, you really feel like you are there, and because the descriptions are so detailed, you get a real feel of the characters. I highly recommend this series of books, each with its own couple and a fight for justice, and a happily ever after.
Read more
Helpful
Comment Report abuse

Kindle Customer
5.0 out of 5 stars Loved the stories, but the steam!
Reviewed in the United States on January 27, 2020
Verified Purchase
I chose the rating for the stories.
I would have liked less sex - not NO sex, just less - and more story.
I like that fated/mates pairs had to fight for their love and that they desired each other strongly.
The stories are good and I wanted more.
Read more
2 people found this helpful
Helpful
Comment Report abuse

Another Cindy too
5.0 out of 5 stars The complete series -- love boxed sets like this
Reviewed in the United States on October 25, 2019
Verified Purchase
No cliff hangers -- you are getting a complete boxed set

Grace
5.0 out of 5 stars It was ok
Reviewed in the United States on November 15, 2019
Verified Purchase
The first 2 stories were good but after that too much "thriller story than sexy story"
Read more
One person found this helpful
Helpful
Comment Report abuse

Sheena
3.0 out of 5 stars 2.5 STARS
Reviewed in the United States on August 5, 2019
If your looking for a sci-fi romance filled with some steamy scenes, look no further! I thought the overall premise was interesting but to be completely honest I had expected the author to include more erotica scenes. Not gonna lie I was a bit disappointed. Furthermore, the boxset seem a bit tame compared to novels I have read of the same genre but it was still an okay read. Morso, there wasn't anything that stood out and made me say 'wow'. "Galaxy Alien Warriors" series is your basic mediocre alien romance with some nice sex scenes and to sum it up, nothing to brag about.

I received a free copy of this book via Booksprout and am voluntarily leaving a review.
Read more
5 people found this helpful
Helpful
Comment Report abuse

SLF
5.0 out of 5 stars Fantastic box set
Reviewed in the United States on August 5, 2019
This box set takes you to four different worlds and a few of the books could actually be turned into a series that I would read. The books area descent length and are standalones. The first book which I think is the longest in the set is about Craze and Misty. Misty is abducted from Earth while she is out jogging in Central Park. The species that abducts her will make your skin crawl. Luckily for her, Craze is sent to intercept the ship she is on and he rescues her and the other prisoners on board and takes them to his home planet, Vixxia Prime. The rescue was but the tip of the iceberg with the way this story has so much more going on in it. As Craze and Misty get closer, they will have to face betrayals,battles, harsh conditions, and discoveries. It will hold you at the edge of your seat in spots. I really liked Misty and her inner strength. Craze was used to getting everything he wanted and had a weak spot he had to overcome if he and Misty were to survive. I adored Chireet and his fellow Mixims. I hope the author will write other books about Craze's brothers.

The second book is about Raevu and Eva. The Juhlian's needed females to save their people. Earth made a deal with them to deliver females and after a decade, still hadn't delivered any. There was a screening process for volunteers and only five were selected and only one survived. Things will not go smoothly between them due to their cultural differences and Raevu's strong personality. He just doesn't know how to deal with a resourceful human female. There are those in both worlds that don't want them together and the fact the entire program was mismanaged didn't help. This book has some feel good moments and some crazy ones. This is another inventive world where even the trees play a part.

Book Three is about Sekkel and Keira. Keira is abducted while heading to the subway and is taken to Jupiter to be sold as a slave. Sekkel sees her and imprints upon her. Unfortunately that is not allowed there. This story is a testament to the power of love.

The final book is about Dekker and Grace. Grace is a scientist who is going to Lyra for two years to study the people and culture there. Lyra is a planet that is against technology. When she meets Dekker, he recognizes her as his true mate. Being human, she doesn't feel the same which means his advances really turn her off. The plants and creatures on Lyra are really interesting. I wanted to hug Keer. For a winged beast, she was really sweet. There are some twists, turns and a few surprises in this book along with those with their own agendas. This was probably my favorite book in the set.

I received a free copy of this book via Booksprout and am voluntarily leaving a review.
Read more
3 people found this helpful
Helpful
Comment Report abuse
See all reviews