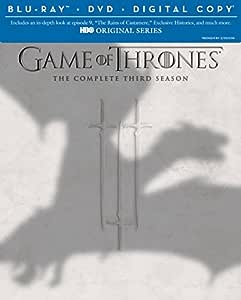 Peter Dinklage (Actor), Lena Headey (Actor) Format: Blu-ray
4.8 out of 5 stars 3,953 ratings
See More
Available at a lower price from other sellers that may not offer free Prime shipping.
Digital Copy Notice: The purchase of this DVD or Blu-ray disc comes with rights to access a complimentary digital version from the production company. To access the digital copy, redeem the code included in your product packaging before the expiration date. Learn more

In the third season of the hit HBO drama series Game of Thrones, the Lannisters are barely holding onto power after a savage naval onslaught from Stannis Baratheon, while stirrings in the North threaten to alter the overall balance of power in Westeros. Robb Stark, King in the North, is facing major calamity in his efforts to build on his victories over the Lannisters while beyond the Wall, Mance Rayder and his huge army of wildlings continue their inexorable march south. Across the Narrow Sea, Daenerys Targaryen - reunited with her three fast-maturing dragons - attempts to raise an army to sail with her from Essos, in hopes of eventually claiming the Iron Throne. 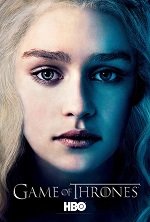 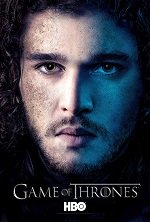 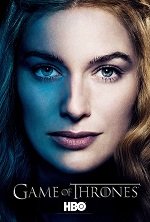 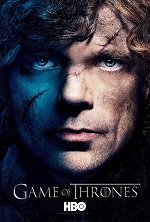 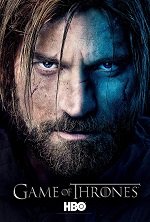 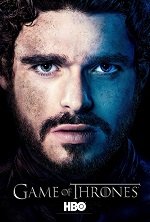 Queen Daenerys Targaryen
The death of her husband, Khal Drogo, has not stopped Daenerys from strategizing her return to the Seven Kingdoms to take back the Iron Throne. Impervious to fire, Dany used the heat of Drogo's funeral pyre to hatch the dragon eggs she was given as a wedding gift. She considers her dragons her children and will stop at nothing to ensure their well-being as she travels through Essos to save her people.

Jon Snow
Ned Stark's bastard son, Jon was raised at Winterfell on near-equal footing with his siblings. He joined the Night's Watch where he serves as steward to Lord Commander Mormont. Despite his instincts to join Robb on the battlefield, he stayed up north to honor his vows to the Watch. While traveling beyond the Wall with the Lord Commander, he was separated from the rest of the group.

Cersei Lannister
Cersei is the only daughter of Tywin Lannister, the richest man in the Seven Kingdoms. Even before she was married off to Robert Baratheon, she was involved in an incestuous relationship with her twin Jaime, the only sibling she cares for. With her son Joffrey reigning as king and her father Tywin now serving as his Hand, Cersei is finding her power eclipsed.

Tyrion Lannister
A dwarf, Tyrion is considered an embarrassment to his House and the fact that his mother died during his birth has not endeared him to his father. What Tyrion lacks in size and strength, he makes up for in mental acuity; his loyalty to House Lannister and the good of the Seven Kingdoms is unquestioned. He served as Hand of the King in his father's absence, and although few know it, it was Tyrion who hatched the plan that saved King's Landing from Stannis Baratheon's attack.

Jaime Lannister
Jaime is twin brother to Queen Cersei. A celebrated knight and member of the Kingsguard, his reputation as "The Kingslayer" dogs him: It was he who slew the Mad King, in violation of his oath to protect the royal family. Robb Stark took him prisoner (twice), but Catelyn Stark, anxious to trade him for her daughters, set him free.

King Robb Stark
Lord of Winterfell and now King in the North, Robb has always been aware of the responsibilities that come with his title. At present, that means avenging his father's death and bringing his sisters home. Robb has a close relationship with his bastard half-brother, Jon Snow, but has vowed vengeance against Theon Greyjoy, his father's ward, who betrayed him by taking Winterfell and murdering members of the Stark household. Robb's direwolf is named Grey Wind.

4.8 out of 5 stars
4.8 out of 5
3,953 global ratings
How are ratings calculated?
To calculate the overall star rating and percentage breakdown by star, we don’t use a simple average. Instead, our system considers things like how recent a review is and if the reviewer bought the item on Amazon. It also analyzes reviews to verify trustworthiness.

Elessar
5.0 out of 5 stars A Great Show Unleashes its Fury
Reviewed in the United States on July 4, 2018
Verified Purchase
When I first saw Game of Thrones, I knew this season would be (based on how the series was being paced) the acid test. Corresponding to the first half of book 3, A Storm of Swords, this season would have moments that could make or break the show. Thankfully, the cast and crew proved to be more than up to the challenge and have continued to do so.

I'll refrain from mentioning a certain episode (you know the one) to avoid spoilers, but I will note that this season features the introduction of some of my favorite supporting characters: Meera Reed, Thoros of Myr, Tormund Giantsbane, and Beric Dondarrion. We also see Tywin Lannister in a larger role, and Charles Dance absolutely shines in the role. His withering put-downs bookend the season and are always a joy to watch.
Read more
5 people found this helpful
Helpful
Comment Report abuse

Gina M. Pace
5.0 out of 5 stars you haven't got it yet? what are you waiting for?
Reviewed in the United States on April 13, 2014
Verified Purchase
if by now you aren't on board the GoT train, then you have a lot of catching up to do. But a thirty hour marathon of watching this show now is really a bit much.... I advise a season a day with a nice break in between. However, it's terribly addictive, and the onslaught continues in terms of sex, violence, power struggles and so on. Hell, even the costumes rock.

HBO never backs down from portraying borderline questionable themes and scenes with a gritty reality that will make you sit up and gasp at a few of the scenes. It's got its hooks in me like crystal meth.... can't stop this thing we've started....

Deviation from the books continues but is always done both with GRRM's awareness and involvement. He's got a close relationship with the writers and they are keeping true to the TONE and FLAVOUR of the books even where they make changes to the action or timeline. Ultimately the result still serves to bring you forward right where you're supposed to be.

At this point I've stopped reading the books looking for explanations of things and I am taking the series at face value. It's that good. When I go back to the books again later they will dovetail with the show much more logically I am sure.

There is a new packaging design for the third season, it still matches but it's got this translucent plastic slipcase instead of the cardboard one. My OCD wishes it matched identically, but hey.... as long as it's not a big difference I'll be ok.

Same 5 discs with 10 episodes as prior seasons. Still putting fun features on each disc instead of a features disc separately.

If you're reading my review, you want to be convinced to buy it. So go buy it already. You won't be sorry. The only reason not to get DVD is if you get Blu-Ray. Otherwise it's a gem. I just wish I could buy season four already.... the wait is gonna kill me.....
Read more
23 people found this helpful
Helpful
Comment Report abuse

Jack E. Levic
5.0 out of 5 stars VIOLENT, BEAUTIFUL, ENGROSSING, SEXY - NOTHING LIKE IT ANYWHERE
Reviewed in the United States on March 18, 2014
Verified Purchase
I don't have HBO so I waited anxiously for Season 3 to finally be released on DVD. There is nothing like GAME OF THRONES on TV or in the theaters. In fact, GAME OF THRONES surpassing just about any theatrical movie for quality and visual effects. A TV version of GAME OF THRONES allows for deeper character and story details. Sadly, there are only 10 episodes in the Season 3 but they are 10 seriously powerly episodes. GAME OF THRONES is addictive and can't be missed. It is set in a mythical land that looks and feels like medieval Europe. The costumes and settings are lavish. It feels not expense was spared in the filming of this remarkable show. It is an actor and Casting Director's dream with parts for actors of all ages, sizes and looks.

I could spend pages extolling the virtues of the cast of Season 3 but I feel there are two amazing standouts. Maisie Williams plays young Arya Stark trying to avenge her father's murder and reunite with her family. Dressed as a boy she exudes anger and determination in her face. We feel her anger and pain and determination. This fine young actress has a bright future. Another remarkable actor is Alfie Allen as Theon Greyjoy. This season he is a prisoner being tortured by a mysterious person. Allen is so believable in his pain and misery. We see it in his eyes and actions. Here is another actor to watch.
It is great to see lovely Diana Rigg as Olenna Tyrell. We rarely see this fine British actress and it's a joy to see her as the aging Tyrell Matriach in a role she obviously loves. Add in beloved character actor Charles Dance and the gorgeous Natalie Dormier and we have quite the cast and again, I could go on for pages just discussing the actors.

There is a "look" to GAME OF THRONES that deserves praise for the production team. The lavish locales are awesome. We are taken from dark and forbodding locations to lush and lovely settings. It's hard to imagine all the work involved in filming this series.

A word of caution. GAME OF THRONES is not for the squeamish. Season 3 brings us to new heights of gore and violence. This season maiming and loss of body parts are on the agenda. No one is safe and no one is spared as the innocent kill the innocent. It's war afterall we hear over and over.

GAME OF THRONES is am amazing show to delight the senses and unnerve the weak-hearted.
Read more
5 people found this helpful
Helpful
Comment Report abuse

fred the photographer
5.0 out of 5 stars Game of Thrones, one of the best
Reviewed in the United States on February 18, 2019
Verified Purchase
This is a replacement order for Game of Thrones season 3. I have collected all the seasons so far. I like Game of Thrones because there is no clear-cut hero. This show is NOT predictable. The acting is excellent. The storyline is well written. It does Not take place on the earth. Like earth there are Kings, Queens, knights and kingdoms. The series follows the story of the seven Kingdoms, which are fighting for the Throne of all the kingdoms. In most cases even the 'bad' guys are not all that wrong. If you like Princesses, Kings, Queens, dragons, and drama with adventure you will like Game of Thrones. You will have to start with season one.
Read more
Helpful
Comment Report abuse
See all reviews

Amazon Customer
5.0 out of 5 stars Brilliant Series
Reviewed in the United Kingdom on February 26, 2017
Verified Purchase
Not sure if it really is a blue ray copy but had no issues watching any of the disks. Have already purchased the 4th season from the same company.
Read more
Report abuse

Andre
5.0 out of 5 stars Five Stars
Reviewed in the United Kingdom on March 2, 2018
Verified Purchase
As good as the first and second season.
Read more
Report abuse