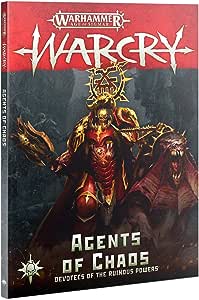 Agents of Chaos is the essential guide to commanding the forces of Grand Alliance: Chaos in games of Warcry. Nineteen warbands are detailed in full, from festering Maggotkin of Nurgle to vicious skaven. Youll find loads of new fighter cards, background tables, Fated Quests, and Challenge Battles in short, everything you need to play the forces of Chaos in full campaigns.
Inside, youll find:
- Full rules for the following warbands: Beasts of Chaos, Blades of Khorne: Daemons, Blades of Khorne: Bloodbound, Disciples of Tzeentch: Daemons, Disciples of Tzeentch: Arcanites, Maggotkin of Nurgle: Daemons, Maggotkin of Nurgle: Rotbringers, Hedonites of Slaanesh: Daemons, Hedonites of Slaanesh: Sybarites, Skaven, Slaves to Darkness, Iron Golem, Untamed Beasts, Corvus Cabal, Cypher Lords, The Unmade, Splintered Fang, Scions of the Flame, and Spire Tyrants.
- Fighter cards for nearly every model available to the Grand Alliance: Chaos ranges.
- Rules for three Chaos Allies: Fomoroid Crushers, Ogroid Myrmidons, and Mindstealer Sphiranxes.
- New rules for warbands with mixed Faction Runemarks under the same Grand Alliance and more than one Leader.
- Refined rules to include Monsters in your warband, as well as new abilities to use against them!
- Tables for warrior names, warband origins, and leader backgrounds.
- 4 Chaos Fated Quests, including Spoils of Victory tables for both Honour and Glory.
- 6 Chaos Challenge Battles, including special rules and valuable Spoils.
If you desire nothing more than bloodshed in the name of Chaos, this 112-page softback book is for you.
A copy of the Warcry Core Book is required to make full use of the contents of this expansion.

Matt
3.0 out of 5 stars Great resource if you're new or missed out on card packs, not much of an update for veterans
Reviewed in the United States on January 16, 2021
Verified Purchase
I'll get into the fine details below, but I do think this is a solid value for those new or newer players out there. As a Warcry enthusiast with a good number of warbands built up and collected, I found every positive change or addition paired with multiple negatives, retreads, or surprisingly unaltered content from the past edition of the game. I don't regret buying the book, but it feels more like something I had to do to stay current with the game than something that meaningfully enhances it.

I am very torn on this book. On one hand, it has that wealth of information for newer players, but on the other, I am extremely annoyed with many of the changes as they impact the lists I've built, models I've worked on, and card packs I've purchased that have been released within the past year. Also: if you were hoping they would balance the non-cultist factions with each other or across the game, I will tell you outright that they did not. The balance issue drives my annoyance, as all of the other meta and stat changes would be easier to swallow if they amounted to something meaningful to the game. Lastly, they could have put all the new content in the 2020 Tome of Champions with the card reprints like they did last year and monster rule updates from all factions making that a heftier book and charged $60 for it, but then you'd be buying one book and not up to five.

The good parts are good:
-As mentioned, so many rules! They have collected all of the chaos models in the game, including monsters, and rejigged the ally system so they are now available as leaders.
-It's cool to see how many models have been added, including somewhat unexpected additions like the BoC Cockatrice, a bazillion Khorne Mortals, and the whole new Slaanesh faction.
-The campaign additions are nice as well, but unless you've already played through everything else they've put out, it's kind of more of the same.
-If you wanted to build a larger cultist roster with more options, having the cards reprinted here means you can skip the Warcry boxes and go straight to the double packs for AoS for but a few dollars more.

The annoying parts are more plentiful for me as someone who's already invested a lot of time and resources into the game, but might not really matter for new and newer players:
-Invalidated many existing cards by changing stats, including a lot of the packs released early 2020. This is doubly annoying as many of them only had 5 - 8 unit cards making them...questionable purchases to begin with. They also ended up altering or replacing a number of abilities, making some of those cards rather useless as well.
-Completely retooled/removed the ally system as far as I can tell, and reprinted the Chaos monsters. This makes the Monsters and Mercenaries book just about pointless within 18 months.
-Changed a number of leader models, which understandably affects the meta but is more annoying for me knowing I spent a lot of time working on those models. This is doubly annoying as they...
-Nerfed a good number of the allies-turned-leaders, which again, updates to the meta would be fine except this now becomes exponentially more annoying as they...
-Absolutely did not balance the factions or smooth over the power curve in any meaningful way! Skaven remain ridiculous and got a handful of powerful new troops, whereas Nurgle Mortals remain awful and the new models only serve to double down on where they are lacking. Khorne Mortals and Slaves to Darkness received a boatload of new leaders, but these are mostly nerfed, homogenized, and now arguably overpriced former Ally picks. Some of the smaller factions, such as Khorne Daemons, both Nurgles, and Tzeentch Daemons all remain relatively small, whereas Skaven, BoC, StD, and Khorne Mortals have even larger rosters than before. I know the roaster size is largely dictated by what models already exist, but I think they had opportunities have models show up in multiple lists in relevant and lore-compatible ways as they did throwing the Khorne Hounds into the Mortal list.
-The Campaign and Monster content, while nice to have collected here, is not really "new" or significant if you've been keeping up with the releases to date.

I am waiting on the Order faction book, which I believe has more brand new warband and unit info in it as well as the previous white dwarf releases collected together for good measure. My understanding is also that the Destruction warbands all got some needed support in their book. Perhaps my issues from this book often have to do with the fact that Chaos has previously received the most attention and wasn't short on options before? Whatever the case, my hope is these books can be the foundation for future updates, and that this 2nd edition of Warcry is now fleshed out enough to have more than 18 months of life in it before dropping a whole new semi-mandatory set of books.