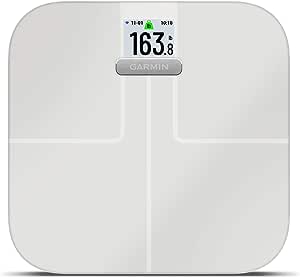 Get a more holistic view of your health using the Index S2 smart scale. Track your progress toward your goals with accurate measurements for weight, weight trend, body fat percentage, BMI, skeletal muscle mass and more. Seamlessly sync with your Garmin Connect account via Wi-Fi connectivity to see your data, get trend graphs, view multiple daily weights and more alongside your other wellness information (requires the Garmin Connect app downloaded to a compatible smartphone). You can even use the app to customize the data you see when you step on the scale. Create up to 16 unique user profiles to track individual stats and progress.

4.3 out of 5 stars
4.3 out of 5
49 global ratings
How are ratings calculated?
To calculate the overall star rating and percentage breakdown by star, we don’t use a simple average. Instead, our system considers things like how recent a review is and if the reviewer bought the item on Amazon. It also analyzes reviews to verify trustworthiness.
Top reviews

Dudley
1.0 out of 5 stars I wanted to like this, but it doesn't work
Reviewed in the United States on February 7, 2021
Style: BlackVerified Purchase
I wanted to love this scale, but sadly this scale just doesn't work the way that it should. The scale does not connect to certain WiFi networks and will not consistently sync your data to your Garmin Connect account. For this reason, I am returning this scale. More details below:

I am in the Garmin Ecosystem. I have the Forerunner watch, the Edge bike computer, the cadence sensors, the speed sensors, and the Garmin Connect application. I like the quality of Garmin's products. I like the way they are designed around their users (e.g. The Forerunner watch uses buttons instead of a touch-screen because a touch-screen doesn't work with sweaty hands). They meet my needs and they work consistently. I wanted to love this scale, but it does not meet Garmin's quality standards for use.

When I opened the box, I was very impressed with the build quality. The scale is quite solidly built. In the box, you get 4 batteries, and some extra feet for using the scale on a carpeted surface. I popped the included batteries into the scale and started it up.

Setting up the scale seems simple at first. You pair the scale to your phone using Garmin Connect, then proceed with the setup process. You add a nickname for yourself (The scale can sync to 16 unique users), and then you input your WiFi details. The scale says it is online, and you're ready to go. Simple...

Or so I thought. I stepped onto the scale, and it gave me my weight. But instead of recognizing me as the user, the only user on the scale at this point, it says I am a guest user. Well that is odd, why wouldn't it recognize me? I go onto the Garmin forums looking for help. The scale, despite having Bluetooth, does not use Bluetooth to sync anything. It is only used for initial setup. Instead, the scale uses WiFi to sync data. I find that some users are also having trouble with their WiFi networks, and that pairing it to their phone as a hotspot works better.

So I give this a try to add my phones hotspot as a WiFi network. The way that you do this is a bit unintuitive. You hold "Reset" on the bottom of the device, which doesn't actually reset the scale, but instead puts the device back into Bluetooth pairing mode. Once it is in this mode, you can add another WiFi network to your device. Note that if you do this, your scale will have a status of "WiFi setup incomplete" within your Garmin Connect devices section.

So now, with my phones hotspot on, I try weighing myself again. This time, it recognizes me correctly, and gives me my body composition data as well (BMI, Bodyfat %, Muscle mass, etc.). But when I go into my Garmin Connect application on my phone, it still does not show up. The data just doesn't want to sync over. I try a few more times before it finally shows anything in my app.

The syncing seems to be really inconsistent. I've had it sync over within a couple minutes, and I've had it take as long as several hours. The scale just doesn't want to sync over WiFi. Garmin's website is not helpful when it comes to troubleshooting. Is it a port issue? Does it need a reserved IP address? Does it need 2.4Ghz or 5Ghz WiFi? Why doesn't the device work over Bluetooth when it knows the user that is using it (and you can tap to select other users if it ever gets it wrong)?

The primary function of this scale is to measure my body composition and weight, then sync it to Garmin Connect. It needs to work more reliably and conveniently than if I want to mark this data myself, manually. But at this point, it doesn't do that. For that reason, I am returning this scale. I am extremely disappointed in this scale. It is clear that Garmin released a product that was not fully thought out.
Read more
14 people found this helpful
Helpful
Report abuse

Dave S
5.0 out of 5 stars Nice scale
Reviewed in the United States on November 7, 2020
Style: BlackVerified Purchase
Just got this scale last week. Easy to setup and synch with my Garmin connect account. Weight is accurate and I like how the scale tells you the delta or change day to day. Lots of data to look at. Not sure how accurate body fat etc is but seems reliable and likely accurate for monitoring change rather than absolute values. No regrets on purchase.
Read more
13 people found this helpful
Helpful
Report abuse

Cory K.
2.0 out of 5 stars Unreliable and Inaccurate
Reviewed in the United States on January 20, 2021
Style: BlackVerified Purchase
When I received the scale it wouldn't want to pair. I reset it and it didn't want to turn back on. I changed batteries, tried resetting again several times, nothing. Few hours later it turned on and I successfully paired it...finally.

After setup, naturally I tried to weigh myself. I did it 5 times in a row. Most measurements were within 0.1 lbs, however one was 4 lbs off. Additionally, the body percent fat reading was way high. It read 20% and I know I'm not near that figure as I keep fit and have measured about 7% on caliper tests. Tanita brand scales appear much more accurate in estimating body fat.

So I returned this scale. For the amount of money you're spending on this scale, you can find A LOT of other brands that perform similarly and more accurately.
Read more
2 people found this helpful
Helpful
Report abuse

Past history with Garmin shows that they are not able to resolve issues in a timely manner. The fix of the original Index Smart scale took years and were incomplete. Fixes to the ForeRunner 310XT and Edge 1000 were never completed.

If you have to have connected scale for the Garmin ecosystem look for a closeout Index Smart Scale. The upload issue is mostly fixed and you might be able to buy one at a reduced price.
Read more
3 people found this helpful
Helpful
Report abuse

Amazon Customer
5.0 out of 5 stars Great scale for Garmin lovers
Reviewed in the United States on March 30, 2021
Style: BlackVerified Purchase
Best scale by far assuming you are using Garmin Connect for tracking your workouts. Good scale for all the metrics if not.
Read more
Helpful
Report abuse

Maximillian
4.0 out of 5 stars Works well.
Reviewed in the United States on March 23, 2021
Style: BlackVerified Purchase
I am very happy with this scale. The build quality is solid, the information is useful and accurate compared to other sources and generally integrates well with the Garmin Connect App.
Just pricey for what it is.
Read more
One person found this helpful
Helpful
Report abuse

Cycling505
5.0 out of 5 stars Great Scale
Reviewed in the United States on April 4, 2021
Style: BlackVerified Purchase
Great addition for my collection of Garmin devices. It works great with the app to provide consistent tracking of progress.
Read more
Helpful
Report abuse
See all reviews