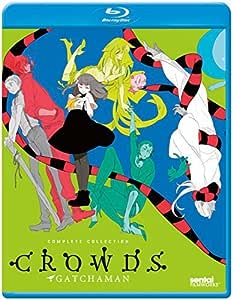 For most of the residents of Tachikawa city, life seems to be perfectly normal. That's how it seems, but the truth, known only by a tiny select handful, is that this is a city at war. Every day, as the citizens go about their business, they are under attack by alien criminals and mysterious organizations seeking to conquer, enslave and destroy. But to combat these threats, a covert council has secretly selected certain individuals to serve as protectors. Wearing special suits that amplify latent powers hitherto unsuspected, they blend into the crowds and shadows, waiting until the call is given to fight again. They could be anyone: your neighbor; your best friend's mom; even high school students like Sugune Tachibana and recent college grad Joe Hibiki. And needless to say, schoolgirl artist Hajime Ichinose is probably the last person anyone would ever suspect of being a soldier entrusted with defending mankind. But she is, even if as the latest recruit she still has an awful lot of learning to do. Hiding like ninjas, powered by super-science, they are humanity's first and greatest line of defense. They are the GATCHAMAN CROWDS!

Amazon Customer
5.0 out of 5 stars Five Stars
Reviewed in the United States on May 27, 2018
Verified Purchase
My brothers enjoyed it.
Read more
Helpful
Comment Report abuse

Robert J.
5.0 out of 5 stars Highly recommended, one of the best anime I've seen in nearly 60 years and viewing thousands of anime.
Reviewed in the United States on July 5, 2015
Verified Purchase
One of the best anime I've seen in 60 years of being a fan. I didn't like the original series so I approached checking this out with some trepidation on Crunchy*oll.com. All I can say after watching the series is that the writing is phenomenal and pleasantly deviated from the norm storylines experienced on other anime and tv shows.

The 2nd season started on the 4th and it looks just as good.

John Albatross
5.0 out of 5 stars An Atypical Commentary on Social Media
Reviewed in the United States on September 5, 2014
This show has absolutely nothing in common with the original Gatchaman cartoon and that's a very good thing. It completely shattered my expectations and kept me engrossed in the story. It starts out as a typical superheroes-versus-aliens show but quickly become anything but typical.

At its core, it is a very timely and sophisticated commentary on the benefits and ills of social media wrapped in fantasy elements. Both good and dark sides of social networking are explored. The character Rui wants to use the social networking site he has created to foster cooperation among the city's residents and thereby change things for the better but the villain Katze wants to use the same tool to bring out the worst in people. It's a very good look at how social media can be used for both good (by exchanging timely and helpful information) and evil (when people take the law into their hands).

David Wald deserves an award for his voice acting as Katze. It is a pure delight to hear him spew lines and rhymes as he thoroughly enjoys being evil. He is funny and dark and crazy all at the same time. His performance reminded me of the Joker in the Batman animated series.

Hajime is another character who was dubbed and portrayed very well. Her perpetual cheeriness can get annoying at times but it gives her a lot of personality. She is correctly described as the "sunshine" of the group and it is her character that single-handedly lifts all the others out of their rut and gives them the hope and courage to function once again. That is probably why her character is the only one that is not coloured in monotone on the Blu-Ray case's cover art.

Cassandra
5.0 out of 5 stars Gatchaman Crowds broke with the mold anime series has had in the past
Reviewed in the United States on July 10, 2014
Sentai Filmworks will not be releasing an extra episode known as Director's Cut of the final episode of Gatchaman Crowds that explains the finale episode in depth. Still despite that ,Gatchaman Crowds, on DVD or Blu-ray will be a real treat alone considering the animation was perhaps one of the Best of 2013.

Check out more reviews on anime: The Huge Anime Fan via Wordpress

Gatchaman Crowds was a series that drew me in for the most unique and beautiful animation I had ever seen. The story background seemed mildly interesting but really the animation did it for me in deciding to watch when first began the series. Still Gatchaman Crowds held some surprises in regard to attractive story and characters and their character development.

Gatchaman Crowds centers on some aliens and more so humans who live on Earth in the distant future who are approached by Lord JJ who gifts them with a special power which turns them into Gatchaman. As Gatchaman they must protect the Earth from a strange mass only known as MESS that makes humans disappear. It is not until the introduction of Hajime that we see the Gatchaman begin to think differently in their approach to fighting MESS. They always kept toward the shadows until she came along. Hajime changes a lot of things and she frees them from their doubts. She doesn't just inspire the Gatchaman but Rui, a boy genius, who is a major player who clashes with the Gatchaman at some point.

The characters are actually a big draw to the series specifically Hajime. She is bizarre in personality. She is hilarious but in a way that is rather bubbly and happy-go-lucky. Then there is Sugane who is such a serious guy but it is quite interesting to see how Hajime alters his views of the world. Rui who mentioned before is a cross-dressing boy but also a smart guy who develops a program and major worldwide social media that is called GALAX. The first few episodes are devoted to developing his story.

The voice acting is pretty high quality for Gatchaman Crowds. Sugane is voiced by Ryota Ohsaka the voice actor who voices Haruto Tokishima in Valvrave the Liberator (Kakumeiki Valvrave) which has recently been such a popular series. Hajime is voiced by Maaya Uchida who has such an upbeat and memorable voice. Maaya also happens to sing the Ending Theme Song for Gatchaman Crowds. The singing happens to be good,by the way. All other characters are pretty great too.

The animation in Gatchaman Crowds is produced by Tatsunoko Production. The CGI effects can be seen in the robot fighting scenes which burst with beautiful color. The general animation when seeing the anime characters is something that stands out with a touch of realism. There is just so much skill you can tell it took in producing animation like this.

The only real issue encountered with the series was that toward the end many of the resolutions seemed implausible and rushed. The cause of it being perhaps the creators of Gatchaman Crowds may be planning for a Season 2. They are since it has just been announced a while back. The second season is titled Gatchaman Crowds Insight.

Gatchaman Crowds began strong. Conclusion-wise not so much. Still overall the anime series broke with the mold anime series has had in the past. A shining future for anime series seems clearer more than ever.

About this review
I'll be buying Gatchaman Crowds [Season 1] sometime after it releases and I'll report back on the on-disc extras. Pretty sure there wont be many since it is a Sentai Filmworks release but will report in just in case there are any voice actor commentaries, featurettes, and also just how the cover artwork presentation looks in person.
Read more
6 people found this helpful
Helpful
Comment Report abuse

JAnderson
5.0 out of 5 stars I haven’t bought, but I love the show!
Reviewed in the United States on May 12, 2020
I haven’t bought it yet, but I watched it on VRV and I absolutely love it! I only like dubbed anime so it would be nice if this came with the English dub. Awesome show and the animation style is so cute! My favorite character is O.D or Utsutsu! I’m definitely going to buy it!
Read more
Helpful
Comment Report abuse
See all reviews

Philip Jenkins
4.0 out of 5 stars Four Stars
Reviewed in the United Kingdom on March 16, 2015
Verified Purchase
it is good
Read more
Report abuse