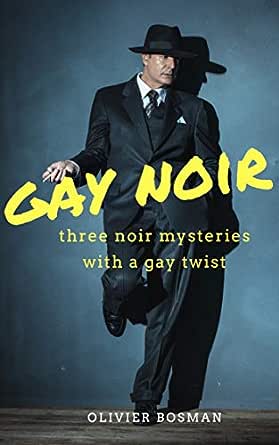 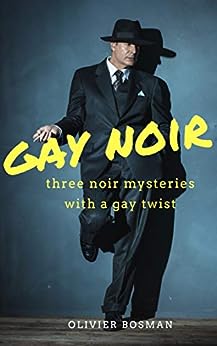 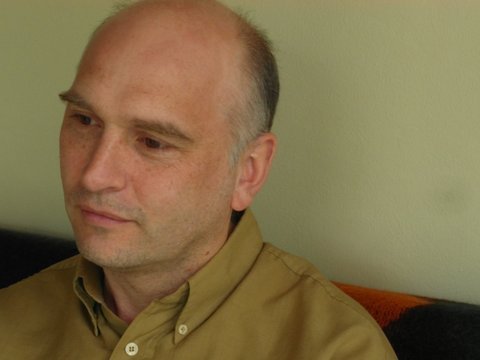 Justanotherreview
VINE VOICE
5.0 out of 5 stars Gritty
Reviewed in the United States on December 7, 2018
Format: Kindle EditionVerified Purchase
Gay noir. I didn’t realize this was an underrepresented genre until I read this book. This masterful rendition of the cut to the bone style with fast paced action, while developing themes and characters, is rare in gay fiction.

The 3 novellas are independent of each other. I enjoyed the first one most because it is the classic tale of a private detective in the style of Sam Spade. The plot is intricate yet easy to follow with each scene building on the last. Felix and his secretary, Joanie, get into and dig themselves out of a plot involving Russians and nuclear subs. Along the way, they engage in all manner of legally and morally grey areas.

The other stories are equally complex with characters who all float in the moral middle of life. The facts are more gruesome. The deaths are uglier. The endings are more ambiguous. I suspect many will favor the latter two.

These are not main characters who are incidentally gay. Their sexual identity plays a central role in each story.

The other characters are each interesting in their own way. Joanie doesn’t do much secretarial work. She’s more of a partner but the times (post-war England) wouldn’t allow it. Without hesitation, Felix treats her as an equal.

Above all, the story is king. Tightly written, the plot doesn't get bogged down with descriptions or internal monologues. Noir is the ultimate "show not tell" and this book captures the style perfectly.

Ulysses Grant Dietz
4.0 out of 5 stars Three very different novellas, connected by good writing and thoughtful, complex narratives.
Reviewed in the United States on January 17, 2019
Format: Kindle EditionVerified Purchase
Three novellas set in the post-war past – two in England, one in Los Angeles - and each of these short books is tantalizing, authentic in feel as to time and place. All of them feature a central gay character who, in one way or another, has to deal with who he is, and the less-than-honorable behavior of those around him.

I am not generally a fan of short-form literature (this is my problem, mind you); but I really enjoyed all three of these, because the author makes them complete, engaging experiences. The Honeytrap features a small-time private eye in Spitalfields, London, who gets caught up in a cheating-husband case that quickly devolves into something complex and dark. The Deluded centers on a young would-be writer, whose guilty innocence lures him into an emotionally-fraught triangular relationship involving Jewish refugees and stolen jewels. Finally, Estranged focuses on a gay teenager in 1950s Hollywood, struggling to come to grips with who he is in the face of neglect and emotional manipulation.

In all three of these novellas, the main character finds himself in over his head – and the tension in the narrative is based on whether he will come out of his situation in one piece – physically or emotionally. Each story also exposes characters whose motives are truly selfish and sinister, in some cases against the reader’s expectations. Who is the real victim? Who is the bad guy? The young men in each case are sympathetic and naïve to some extent, but not out of ignorance or ill-will.

By drawing the parallels between each story, I don’t mean to imply that they’re all alike: each is very different in texture and tone, carefully written and vividly detailed. Interestingly, all three stories could carry on into a second book – they’re just open-ended enough to make me wonder what might happen next. To me, that’s the sign of a good writer.
Read more
Helpful
Comment Report abuse

padme35
5.0 out of 5 stars Brilliant collection
Reviewed in the United States on February 3, 2019
Format: Kindle EditionVerified Purchase
This collection of three novellas is brilliant! Do they stack up or as good as the author's DS Billings Victorian Mysteries series? No but they are still incredibly entertaining and deserving of the "noir" in the book title Gay Noir. There isn't really much I feel willing to divulge in the way of plot for any of the trio of mysteries however they all kept me in a desperate page-turning need.

I have to say that I found The Honeytrap to me favorite, followed by Estranged and then The Deluded. Don't get me wrong, just because I placed Deluded last don't think it wasn't good because it was but I will say it took me a few pages to get into the story. Deluded is told with flashbacks which not every author is able to pull off but Olivier Bosman has, it just took a little bit to get into the feel of the story but once I did I was definitely eager to discover the whos, whats, and whys.

As I said above, all three mysteries definitely fit the noir genre which alone makes this an entertaining collection to lose yourself in but there is more to each one that really kept me on the edge of my seat. Most people who think of "noir" picture Humphrey Bogart as Sam Spade and Phillip Marlowe, at least I know I do, but there is so much more to the genre. I can't say I picture any of the characters being Bogey I loved that there was a certain something that made each story's characters their own and not just the typical garden variety cookie cutter detective who blurs the line of right and wrong to get the case solved. Now that's not to say they are squeaky clean and won't cross that line but Olivier Bosman doesn't just follow a noir recipe to tell these stories.

Gay Noir is a win-win from beginning to end that left me wanting more.
Read more
Helpful
Comment Report abuse
See all reviews from the United States

Amazon Customer
5.0 out of 5 stars The Best In Timepiece Pulp Fiction Noir
Reviewed in Canada on February 16, 2020
Format: Kindle EditionVerified Purchase
If Frank Butterfield's and Gordon Merrick's (RIP) Books showed the romantic, glamorous side of being Gay then this shows the "Hard" Side. Being in the closet, making the most of what little you have and even the danger and heartbreak of not being able to be happy and have what you want. Yet the characters manage to perservere and in many ways triumph over adversity. We see how far we've come in terms of acceptance and how far we still we have to go.
Read more
Helpful
Sending feedback...
Thank you for your feedback.
Sorry, we failed to record your vote. Please try again
Report abuse