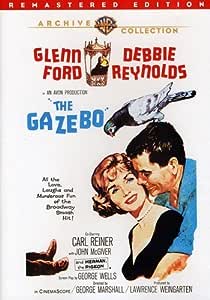 What would you do if a blackmailer showed up peddling nudie pictures of your sweet wife? Why, plug the scoundrel and bury him under the backyard gazebo, of course! Delightful screen farceurs Glenn Ford and Debbie Reynolds are up to their corpus delicti in laughs as a show-biz power couple with something to hide in director George Marshall's (Destry Rides Again) sly black comedy highlighted by a meticulously plotted, hilariously botched "perfect crime." If The Gazebo reminds you of The Trouble with Harry or Family Plot, there may be a reason: when everything is going wrong, the anxious murderer queries Alfred Hitchcock on the phone for some authoritative what-do-I-do-with-a-dead-body advice. Comedy veterans Carl Reiner, John McGiver and Doro Merande also add to the macabre merriment.

4.5 out of 5 stars
4.5 out of 5
102 global ratings
How are ratings calculated?
To calculate the overall star rating and percentage breakdown by star, we don’t use a simple average. Instead, our system considers things like how recent a review is and if the reviewer bought the item on Amazon. It also analyzes reviews to verify trustworthiness.
Top reviews

Classic Film Nut
5.0 out of 5 stars Murder, blackmail and comedy wrapped into one!
Reviewed in the United States on September 5, 2015
Verified Purchase
This has been one of my favorite movies since I first saw it on the big screen in the 1960's. I waited and waited for it to become available on DVD only to be disappointed that it was through Warner Archives that it came on the market. Well, shucks, I finally gave in and bought it as I really did love the movie. As usual, with films from the Warner Archives, there are no extras. Just the nuts and bolts.

This is a comedy with a dark side. Even in the darker situations, there are comedic undertones. Glenn Ford was a marvel. A solid actor, probably best known for western roles, his comedic skills and timing were superb and on fine display in this film along with those of Debbie Reynolds and John McGiver in particular. McGiver's deadpan, straight faced pronunciation of the word "GAZE-bo" brought down the house every time he uttered it.

This is an entertaining movie that holds your attention throughout with excellent performances by the principals. Sit back and enjoy anytime you need a good laugh.

E. L. Diaz
5.0 out of 5 stars SO WORTH the wait to finally see this again!
Reviewed in the United States on July 22, 2020
Verified Purchase
What a fun, old-fashioned comedy this is! Debbie & Glenn are perfect together, making the story work perfectly. Of course, she sings, because that’s how they made comedies back then. But it’s not long and only one, so no prob! Crazy silly fun. And NO FOUL WORDS to annoy. Who knew a movie could survive without profanity, hey?! (Hollywood take note—it’s a cheap cop-out for quality writing).
Read more
Helpful
Comment Report abuse

Amazon Customer
5.0 out of 5 stars Nice little comedy.
Reviewed in the United States on February 10, 2017
Verified Purchase
One of the best movies ever. It is black and white, but you won't miss the color! I had to buy it in VHS back before DVD's because my granddaughter and I used to love to watch it and we checked it out from the library. But sadly (or actually gladly) that copy got stolen and so I bought one. Now I finally have it in DVD. I love my old movies, but sometimes they take a while to get to DVD when they are not "Mainstream". So happy to finally have it.
Read more
4 people found this helpful
Helpful
Comment Report abuse

Connie J. Wehmeyer
5.0 out of 5 stars When Mysteries were Really Fun!
Reviewed in the United States on April 15, 2015
Verified Purchase
What can I say? This is one of my favorite all time movies. It is great to have it in digital format! A great fun, exciting, and intriguing mystery with Glenn ford and Debbie Reynolds at their very best! Each of the other characters is expertly portrayed as well! My husband and I have a standing joke: whenever we cannot find something, the other says "Oh, I gave it to Hungarian relief." Want to know why? Watch this great movie!
Read more
4 people found this helpful
Helpful
Comment Report abuse

M. Eddy
4.0 out of 5 stars Terrific Oldie
Reviewed in the United States on July 31, 2017
Verified Purchase
This is a fun movie featuring the late Debbie Reynolds and Glenn Ford. A bit dated in the ideas, but a still clever and funny plotline of a writer working for (an unseen) Alfred Hitchcock while he thinks his Broadway star wife is being blackmailed. I hadn't seen it in a while, but memories were good enough that I wanted to add it to my DVD collection. Glad I did
Read more
One person found this helpful
Helpful
Comment Report abuse

Theresa Z.
5.0 out of 5 stars Funny but overlookede
Reviewed in the United States on February 13, 2014
Verified Purchase
I've loved this movie for many years and am delighted that it's available on DVD. If you're hearing imapaired or rely on captions or subtitles for some other reason, please note that those are not available on this version of the DVD. I hope that it gets the proper treatment sometime in the future, but for now, I'm able to thoroughly enjoy Glenn Ford's turn as a neurotic writer (I love his phone call with "Hitch") with a wife and a pigeon and a newly-acquired gazebo. And if I say more about the pigeon that'd be a spoiler, so I won't.
Read more
2 people found this helpful
Helpful
Comment Report abuse

D. R. Schryer
5.0 out of 5 stars Hilarious Hitchcock-like comedy
Reviewed in the United States on September 9, 2011
Verified Purchase
Although he never received an academy award -- or even a nomination -- Glenn Ford was was of the most consistently outstanding actors of the Golden Age of movies. Somehow he excelled at everything from action and adventure movies to romance and comedy. His light touch is just right for this Hitchcock-like comedy in which Ford reluctantly attempts to kill a man who is blackmailing his wife -- played by the ever-delightful Debbie Reynolds -- over some nude pictures she posed for in her teens. Everything which can go wrong for Ford's character hilariously does go wrong -- except, of course, for the comedic twist of fate, involving a pigeon he rescues, which provides a very funny happy ending. If you haven't yet seen this delightful dark comedy please give yourself a treat and do so. You may well love it as much as I do.
Read more
5 people found this helpful
Helpful
Comment Report abuse

Truview
5.0 out of 5 stars A COMEDY TO TREASURE
Reviewed in the United Kingdom on October 3, 2011
Verified Purchase
It is strange that this movie has taken so long to appear on a commercial DVD!
I remember seeing it at a local cinema (Forest Park, Dundee) on a re-issue in
the mid 1960's (the picture dates from 1959) and it rarely appeared on TV.
The Gazebo is a clever and ingenious film, perhaps a writer's film, which we used to call a "black comedy", for those who appreciate a neatly-written story which all dovetails together. It is full of good performances from a twitchy, nervous Glenn Ford to a delightful Debbie Reynolds as his puzzled and supportive spouse, the scene-stealing John McGiver as the builder with his aberrant pronuniciation "that there Gaze-bow!" and not forgetting the maid, Matilda, played by Doro Merande, with her ear-splitting utterances, due to living with a hard-of-hearing mother, and an early role by Martin Landau as a not-too-bright heavy. We even have a long-distance phone call from "Hitch", Alfred Hitchcock at a fortuitious moment, although we don't hear him. Mention should also be made of composer Jeff Alexander's "Handel-ian" English theme and "18th-century Hi-Fi" from the George IV era.
"Herman" the pigeon plays an important part in the plot, especially when he
drops a "bombshell" at the end!
If you've got a funny bone in your body, don't miss The Gazebo". If you don't know whether or not you have a funny bone, you'll soon find out if you watch and "listen" to The Gazebo.
Read more
4 people found this helpful
Report abuse

What the Butler Saw
5.0 out of 5 stars Deeply Funny
Reviewed in the United Kingdom on November 20, 2012
Verified Purchase
Elliott Nash (Glenn Ford) buries a blackmailer under the new gazebo, with hilarious consequences.

Glenn Ford and Debbie Reynolds work well together in this black comedy, not to mention Herman the Pidgeon!

Mr Thorpe the builder, who insists on calling the summer house a gaze - bow, worries that the rain will cause the new concrete to crumble. Elliott has worries of his own, as the situation spirals out of control!

When quizzed by his wife about their missing shower-curtain (used to wrap the body), Elliott explains, quite reasonably, that he has donated it to Hungarian relief.

Watch out for Martin Landau as hood 'The Duke'.

Incidentally, although listed as Region 1, this DVD plays in my region 2 player.
Read more
One person found this helpful
Report abuse

Anatello
5.0 out of 5 stars Great Movie
Reviewed in Australia on September 29, 2019
Verified Purchase
Great movie, glad to finally been able to rewatch it after all these years...
Read more
Report abuse

Page 1 of 1 Start overPage 1 of 1
This shopping feature will continue to load items when the Enter key is pressed. In order to navigate out of this carousel please use your heading shortcut key to navigate to the next or previous heading.
Back
Next
Pages with related products. See and discover other items: 1960 movies, turner classics movies, Best fans for gazebos, Explore Gazebos