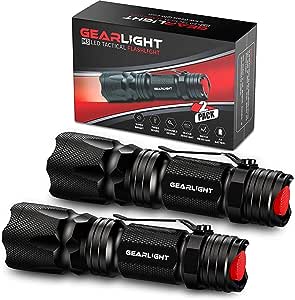 Add to Cart
$13.99
& FREE Shipping on eligible orders. Details
Sold by: USTOPGEAR
Have one to sell?
Sell on Amazon

This compact and tactical flashlight is the perfect gift for a father, husband, scout, or college student for any occasion.

The tough, all-aluminum body makes it suitable for extreme conditions both indoors and outdoors. You can count on it during storms, floods, power outages, earthquakes, and natural disasters.

Tough and small, this torch can be conveniently packed in your backpack, bag, glove compartment, camping gear, or survival kit. The flash function is a life saver when doing roadside repairs or signaling for help. Highly reliable and easy to use, it is the perfect flashlight to have while hunting, hiking, fishing, or camping.

Located in the USA, we specialize in providing quality, reliable, and highly affordable LED products. We offer an extended one-year hassle-free return policy on all purchases made through our authorized reseller, MIDirect.

4.6 out of 5 stars
4.6 out of 5
1,972 global ratings
How are ratings calculated?
To calculate the overall star rating and percentage breakdown by star, we don’t use a simple average. Instead, our system considers things like how recent a review is and if the reviewer bought the item on Amazon. It also analyzes reviews to verify trustworthiness.

Scrappy
5.0 out of 5 stars Don't Spend More
Reviewed in the United States on March 8, 2018
Verified Purchase
I have two other flashlights similar to these and I will say that they are all of equal quality performance-wise. The greatest difference is I paid over twice as much for the other two. The name of the game is best value for the buck and based on that, these Gear Light M3's are pretty doggone good. I also have a police grade Streamlight Poly and the light quality is no better than the ones on these flashlights. Also, they use AA's which in my book is a big plus.
Read more
63 people found this helpful
Helpful
Comment Report abuse

Steven
4.0 out of 5 stars Great price, looks great on the outside, but...
Reviewed in the United States on April 26, 2018
Verified Purchase
I have owned several small tactical flashlights and was going to purchase one more from the best selling (virtually identical looking) small tactical light from Amazon, until I came across this M3 2-packs. I saw all the positive reviews the M3 had on Amazon and decided to buy one as a gift for my daughter for her camp, even though it was going to take 2 weeks for Amazon international shipping to deliver the order oversea.

I was very excited when I received the product and was eager to try it out. I was impressed with the external built, they looked very well made, very sturdy, AND they can stand on their tail (although a bit wobbly) (pic#1). I checked the included batteries and when I turned on the lights, I noticed one had a bright white light but the second one was a bit warmish yellow instead (pic#5). I replaced both with new AA Duracell batteries just in case, and they were the same. In addition to that, the 2nd one’s clicking action was behaving strangely. When I press a full-click to turn it on, instead of the high beam, it starts with low beam. Then when I half-click to cycle it through Low-Strobe-High, but every time I turned it on, it always start at low beam. Upon using the 1st light for few minutes, I also notice the click was behaving strangely as well, where it would randomly get stuck on high beam no matter how I half-click to try to cycle it through.

I also gave it a little endurance test using the factory provided AA battery. Left it continuously on high for 1 hour/day, did it for 3 days, for a total run time of roughly 3 hours before the AA battery died, which is exactly what the description says. I am sure it should last longer with a Duracell AA.

Even though it's not advertised to take Li-ion 14500 battery, the seller answered one of the question that it can operate with 14500, so I tried it out with one of my Olight 14500 battery. Just eyeballing it, I would say it's 30-40% brighter than usual AA battery (pic#3 both on high, 14500 on the left and AA on the right, & #4 with 14500) although the photo probably didn't fully capture the lighting; side-by-side, the low beam on 14500 is equivalent to high beam on AA. HOWEVER, it gives out so much heat on high beam, the flashlight became very warm (or even hot) within 2 minutes of continuous usage I had to turn it to low beam. Whereas it's just slightly warm when on AA, even after each of the 1 hour test.

Overall, after 2 long weeks of waiting, I was a bit disappointed at the quality control of the lights. If it's not for the difference in light temperature and faulty clicking action, I would have given the M3 a 5-star consider the attractive look, external built, and pricing point vs. it's competitors. However, based on that, I wouldn't be too confident to give these to my daughter for her week-long camp, and would probably give the M3 a 3-star instead. I contacted GearLight directly, and they refunded my order in an instant without question, hence my overall 4-star rating to reflect their customer service. It is too bad, because I really want to like these lights. Now I'm still left with a dilemma, what can I give my daughter for her camp...
Read more

Double Strength
2.0 out of 5 stars Don't Trust the Five Star Reviews
Reviewed in the United States on October 18, 2019
Verified Purchase
Open up the GearLight M3 LED Tactical Flashlight box, and you immediately notice two things: the flashlights and a card. On that card is a note that you have a 20% chance to win free merchandise IF you give a five star review. Now, that annoys me for a couple of reasons. First, as a consumer, I now can't trust the reviews being written here. Second, if you're going to bribe me, at least promise me something instead of giving me a chance to win a brand new car. What kind of cheap man do you think I am? That alone is enough to subtract a star in my mind.

Rant over, here's the short version: flashlights have a pretty simple job and I expect them to make light when I hit a switch. This one failed. For the price, I guess it's fine for walking the dog or finding stuff under the bed, but I don't trust it any more. They're off blackout duty and out of my toolbox; I won't be using these when I truly need light. This package is good when you need a volume of flashlights rather than quality.

Long version: The flashlight actually feels pretty nice in your hands. The clip has just the right tension and the button is pretty tactile. The part that slides to focus the light is too loose and will slide down if you jostle the light too much or grip wrong, but that also means it's easy to put back and the light is small enough to just hold the thing where you want it with your pinky. Not a mark of quality, but hardly a deal breaker. I ran this for about ten minutes on high with a 14500 battery in it and it gets uncomfortably warm; not burning, but I was inclined to roll it in my hand or play hot potato. You kind of have to expect that with these, and in exchange it's pretty bright. Another "whatever," but I'd take off a star for the both combined anyway.

After my run test above and a few midnight trips around the house, I finally got a chance to use one of these in a serious way: installing an antenna in my attic. Now, to see how long the battery would last, I hadn't changed the battery out and expected it to die soon. It did. I had the light on low for my needs, when I tapped the power button by mistake and turned off the light. Then I hit the button again to turn it back on. Then I hit the button again to turn it back on. Eight or so angry presses later, I got it to kick back on. Curious, I flipped back through the modes. High? Good but dimming. Low? Gone. It straight up does not work with a low battery. Strobe? Still there, still useless. Disappointed, I continued to work until the light cut off again, probably because I was resting my thumb on the tail cap. My fault, but I could not get it back on no matter how many times I clicked. I ended up having to take the cap off in the dark, reinstall it, then click a few more times before I got dimming light. Nope, not okay, and it happened again later when I don't believe my butter fingers caused the issue. I gain had to take out the battery in the pitch black to get it working again.
Read more
27 people found this helpful
Helpful
Comment Report abuse

Dale S.
5.0 out of 5 stars One had good bright white light but the second one was dim yellow light. Update: Vendor replaced bad light with 2 new good ones!
Reviewed in the United States on March 26, 2018
Verified Purchase
These looked good at a good price. One had a really good bright white light but the second one was a dull yellow light. A new battery did not help. If the seller will send me a replacement for the bad one I’ll raise the rating. If not I’ll just send them back for a refund within th 30 day return period.
Update: The seller sent me two new replacements and they work fine. Rating changed to 4 stars for product and an extra star for top notch customer service. Thanks

Update: in less than 2 days the vendor shipped 2 new lights and they are both excellent so my rating goes for 3 stars to 4 for product and an extra star for most excellent customer service! Total 5 Star all the way.
Read more
30 people found this helpful
Helpful
Comment Report abuse

pmgo
5.0 out of 5 stars Great product, good value, completely satisfied
Reviewed in the United States on April 30, 2018
Verified Purchase
I don't know about the lumen ratings on these products but this is very bright and the beam can be narrowed easily. I took a binder clip and put it on a baseball cap and use this for a headlamp also. The construction seems very solid. It only needs one AA battery.
You can grip it without it sliding out of your hand with the flatted portion of the body. On-off button is convenient.
The pocket clip seems a bit tight but maybe that will keep it more secure.
I have used it quite often and I am completely satisfied.
The price seems reasonable compared to others offered. (about $6 per light)
Read more
18 people found this helpful
Helpful
Comment Report abuse
See all reviews