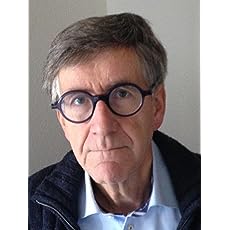 Geert Booij (1947) is professor emeritus of the University of Leiden where he worked from 2005-2012. From 1981-2005 he was professor of General Linguistics at the Vrije Universiteit Amsterdam, and from 1971-1981 assistant / associate professor at the University of Amsterdam, where he also obtained his Ph.D. degree in linguistics. He studied Dutch language and general linguistics at the University of Groningen (1965-1971) where he obtained his MA degree (cum laude). He was dean of the Faculty of Letters at the Vrije Universiteit (1988-1991, 1998-2002), conrector of the Vrije Universiteit (1999-2002), dean of the Faculty of Letters of the University of Leiden (September 2005- October 2007), and member (1997-2002) and chair (2002-2004) of the Dutch Research Council for the Humanities of NWO (the Dutch organization for scientific research). He served on a number of national and international committees for the assessment of linguistic research achievements and the quality of language programs at various universities in the Netherlands.
Geert Booij also taught at the University of Canterbury in Christchurch, New Zealand (Erskine Fellow) in 2002, the Linguistic Society of America Institute at the University of Berkeley (2009), at Harvard University (Erasmus professor of Dutch language and culture) in 2010, at the Freie Universität Berlin (Germanic Department, section Dutch) in 2011, and at the European NetWords Summer school in Dubrovnik (2012). In 2011 he received the Alexander von Humboldt Research Award for his overall achievements in linguistic research. He is a member of the Academia Europea, and since January, 2015 a honorary member of the Linguistic Society of America.
Geert Booij is one of the founders and editors of the book series Yearbook of Morphology (1988-2005), which is, as of 2006, continued as the journal Morphology of which he is also one of the editors. He is the author of a number of Dutch textbooks on grammar, morphology, and phonology, and of four English monographs: The Phonology of Dutch (1995), The Morphology of Dutch (2002, second edition 2019), The Grammar of Words (2005, 20123), and Construction Morphology (2010), all published by Oxford University Press. In 2018 he edited the volume The construction of words. Advances in Construction Morphology He has published linguistic articles in a wide range of Dutch and international journals and volumes.
Read more 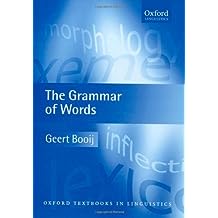 The Grammar of Words: An Introduction to Linguistic Morphology (Oxford Textbooks in Linguistics) Feb 17, 2005
by Geert Booij
( 9 )
$33.64
This text provides an up-to-date introduction to the morphological analysis of words. Morphology deals with the internal structure of words and how this structure affects their phonological, syntactic and semantic properties. This book covers both inflection (the different forms of a word), and word formation, the ways in which new words can be added to the vocabulary of a language.

The enormous variety of morphological operations that we find in natural languages is quite intriguing. The first part of the book gives a cross-linguistic survey of these operations: affixation, compounding, reduplication, and several kinds of phonological operation. The specific properties of word formation and inflection are dealt with in subsequent chapters.

The second part of the book focuses on the ways in which the morphological structure of words determines their phonological, syntactic, and semantic properties. These different 'interfaces' are dealt with systematically, again with illustrations from a number of languages.

In the last part of the book the reader is introduced to present-day research on the acquisition of morphological knowledge, and on the way in which complex words are processed. This will give insight as to how lexical knowledge is structured and how it is stored in memory.
Read more
Other Formats: Paperback 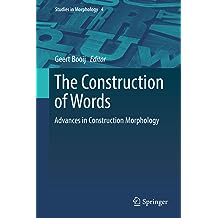 This volume focuses on detailed studies of various aspects of Construction Morphology, and combines theoretical analysis and descriptive detail. It deals with data from several domains of linguistics and contributes to an integration of findings from various subdisciplines of linguistics into a common model of the architecture of language. It presents applications and extensions of the model of Construction Morphology to a wide range of languages.

Construction Morphology is one of the theoretical paradigms in present-day morphology. It makes use of concepts of Construction Grammar for the analysis of word formation and inflection. Complex words are seen as constructions, that is, pairs of form and meaning. Morphological patterns are accounted for by construction schemas. These are the recipes for coining new words and word forms, and they motivate the properties of existing complex words. Both schemas and individual words are stored, and hence there is no strict separation of lexicon and grammar. In addition to abstract schemas there are subschemas for subclasses of complex words with specific properties. This architecture of the grammar is in harmony with findings from other empirical domains of linguistics such as language acquisition, word processing, and language change.
Read more
Other Formats: Hardcover , Paperback 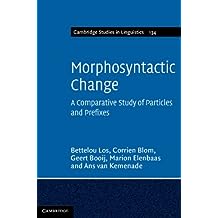 Morphosyntactic Change: A Comparative Study of Particles and Prefixes (Cambridge Studies in Linguistics Book 134) May 3, 2012
by Bettelou Los, Corrien Blom, Geert Booij, Marion Elenbaas, Ans van Kemenade
$25.00
Particle verbs (combinations of two words but lexical units) are a notorious problem in linguistics. Is a particle verb like look up one word or two? It has its own entry in dictionaries, as if it is one word, but look and up can be split up in a sentence: we can say He looked the information up and He looked up the information. But why can't we say He looked up it? In English look and up can only be separated by a direct object, but in Dutch the two parts can be separated over a much longer distance. How did such hybrid verbs arise and how do they function? How can we make sense of them in modern theories of language structure? This book sets out to answer these and other questions, explaining how these verbs fit into the grammatical systems of English and Dutch.
Read more
Other Formats: Hardcover , Paperback 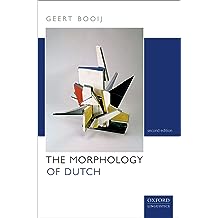 The Morphology of Dutch Apr 17, 2019
by Geert Booij
$84.07
This volume provides a detailed and comprehensive description of the morphological system of Dutch. Following an introduction to the basic assumptions of morphological theory, separate chapters are devoted to the inflectional system, derivation, and compounding, the interface between morphology and phonology, the interaction between morphology and syntax, and, new to this edition, a more detailed study of the features of separable complex verbs. Geert Booij
demonstrates in this book that the morphology of Dutch poses multiple interesting descriptive and theoretical challenges. The volume also contributes to ongoing discussions on the nature and representation of morphological processes, the role of paradigmatic relations between words - and between words and
phrases - and the interaction between morphology, phonology, and syntax.

This second, fully revised edition has been updated throughout with expanded coverage of Dutch morphological phenomena and results from new research. Alongside a brand new chapter on separable complex verbs, it also includes a more sophisticated analysis of the relation between morphology and syntax, and an introduction to the basic tenets of Construction Morphology.
Read more
Other Formats: Hardcover 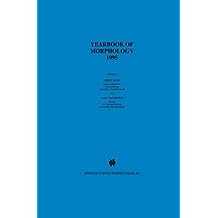 Yearbook of Morphology 1995 Jun 29, 2013
by Geert Booij, Jaap van Marle, G.E. Booij
$23.74
A revival of interest in morphology has occurred during recent years. The aim of the Yearbook of Morphology series is to support and enforce this upswing of morphological research and to give an overview of the current issues and debates at the heart of this revival.
The Yearbook of Morphology 1995 focuses on an important issue in the current morphological debate: the relation between inflection and word formation. What are the criteria for their demarcation, in which ways do they interact and how is this distinction acquired by children? The papers presented here concur in rejecting the `split morphology hypothesis' that claims that inflection and word formation belong to different components of the grammar. This volume also deals with the marked phenomenon of subtractive morphology and its theoretical implications.
Theoretical and historical linguists, morphologists, phonologists and psycholinguists interested in linguistic issues will find this book of interest.
Read more
Other Formats: Hardcover , Paperback 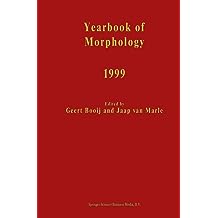 Yearbook of Morphology 1999 Mar 14, 2013
by Jaap van Marle, Geert Booij, G.E. Booij
$23.74
A revival of interest in morphology has occurred during recent years. The Yearbook of Morphology series, published since 1988, has proven to be an eminent support for this upswing of morphological research, since it contains articles on topics which are central in the current theoretical debates which are frequently referred to.
The Yearbook of Morphology 1999 focuses on diachronic morphology, and shows, in a number of articles by renowned specialists, how complicated morphological systems develop in the course of time. In addition, this volume deals with a number of hotly debated issues in theoretical morphology: its interaction with phonology (including Optimality Theory), the relation between inflection and word formation, and the formal modeling of inflectional systems. A special feature of this volume is an article on morphology in sign language, a very new and exciting area of research in linguistics.
The relevant evidence comes from a wide variety of languages, amongst which Germanic, Romance, and Slavic languages are prominent.
Audience: Theoretical, descriptive, and historical linguists, morphologists, phonologists, and psycholinguists will find this book of interest.
Read more
Other Formats: Hardcover , Paperback 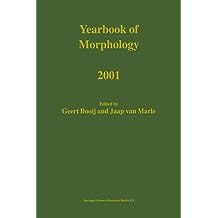 The Yearbook of Morphology 2001 focuses on the notion of productivity, the role of analogy in coining new words, and constraints on affix ordering in a number of Germanic languages are investigated. Other topics include the necessity and the role of the paradigm in morphological analyses, the relation between form and meaning in morphology, the accessibility of the internal morphological structure of complex words, and the interaction of morphology and prosody in truncation processes. 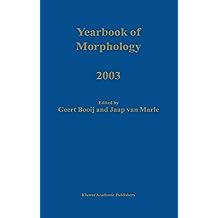 The Yearbook of Morphology series, published since 1988, has proven to be an eminent support for the current upswing of morphological research and has set a standard for morphological research. The 2003 volume deals with the phenomenon of complex predicates consisting of a verb preceded by a preverb, presents historical evidence on the change of preverbal elements into prefixes, and discusses morphological parsing, and the role of paradigmatical relations in analogical change. It is relevant to theoretical, descriptive, and historical linguists, morphologists, phonologists, computational linguists, and psycholinguists. 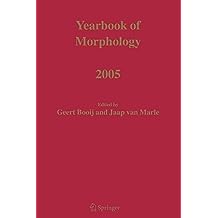 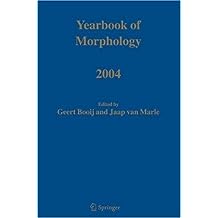 A revival of interest in morphology has occurred during recent years. The Yearbook of Morphology, published since 1988, has proven to be an eminent support for this upswing of morphological research, since it contains articles on topics which are central in the current theoretical debates which are frequently referred to.

In the Yearbook of Morphology 2004 a number of papers is devoted to the topic ‘morphology and linguistic typology’. These papers were presented at the Fourth Mediterranean Morphology Meeting in Catania, in September 2003. Within the context of this denominator, a number of issues are discussed wich bear upon universals and typology. These issues include: universals and diachrony, sign language, syncretism, periphrasis, etc. 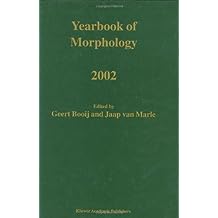 The Yearbook of Morphology 2002 discusses the morphology of a variety of pidgin and Creole languages which appear to have much more morphology than traditionally assumed. Other topics include the morphological use of truncation for the coinage of proper names in Germanic and Romance languages, the way affixes are combined and ordered in complex words, and the complex linguistic principles behind these orderings.