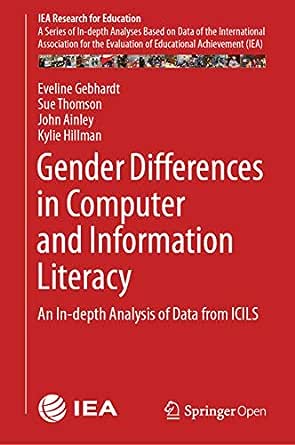 Flip to back Flip to front
Audible Sample Playing... Paused   You are listening to a sample of the Audible narration for this Kindle book.
Learn more
ISBN-13: 978-3030262020
ISBN-10: 3030262022
Why is ISBN important?
ISBN
This bar-code number lets you verify that you're getting exactly the right version or edition of a book. The 13-digit and 10-digit formats both work.

This open access book presents a systematic investigation into internationally comparable data gathered in ICILS 2013. It identifies differences in female and male students’ use of, perceptions about, and proficiency in using computer technologies. Teachers’ use of computers, and their perceptions regarding the benefits of computer use in education, are also analyzed by gender.

The IEA’s International Computer and Information Literacy Study (ICILS) is designed to discover how well students are prepared for study, work, and life in the digital age. Despite popular beliefs, a critical finding of ICILS 2013 was that internationally girls tended to score more highly than boys, so why are girls still not entering technology-based careers to the same extent as boys?

Readers will learn how male and female students differ in their computer literacy (both general and specialized) and use of computer technology, and how the perceptions held about those technologies vary by gender.