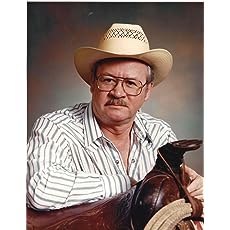 Gene Shelton, a Texas native, grew up on a big ranch in the Panhandle, where many of his stories are set. He is the author of 26 published novels, about half of them under his own name and the rest under pseudonyms.

As a young man Shelton worked as a ranch hand and horse trainer, and rode bulls and roped calves and steers in rodeos on his free weekends. Retired after 35 years in the news business, he lives in Sulphur Springs with his wife of 50-plus years, Barbara. Shelton has been a creative writing teacher and currently is a member and mentor with the Silver Leos Writers Guild of East Texas A&M, and continues to write short stories and novels in his spare time. 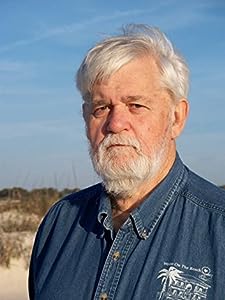 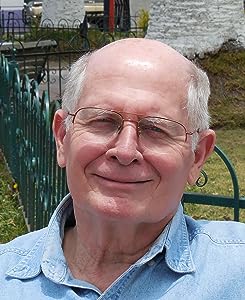 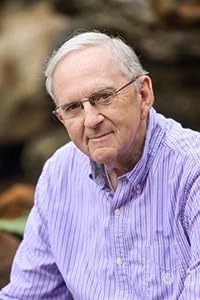 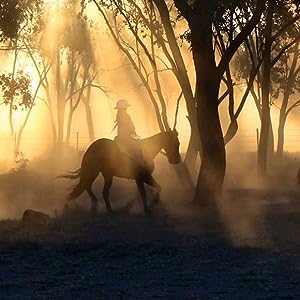 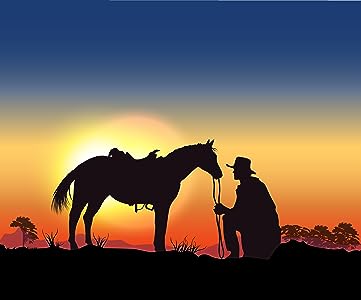 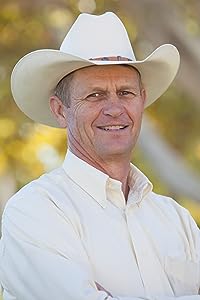 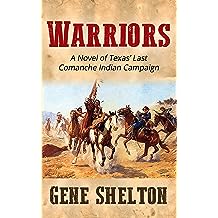 Warriors: A Novel of Texas' Last Comanche Indian Campaign Apr 9, 2018
by Gene Shelton
( 17 )
$4.99
Two young men from two different worlds: One a Plains Indian schooled from youth in war, the other a reluctant warrior driven into uniform by family tradition, the two riding toward a collision course in a deep canyon called Palo Duro in the Texas Panhandle and High Plains. One has everything a man could want; the other yearns for something he cannot have.

This is the story of the Red River War, the final major campaign fielded by the U.S. Cavalry under Col. Ranald S. “Bad Hand” Mackenzie’s Fourth Division against the coalition of Comanche and Kiowa warriors led by famed Quanah Parker.

This historical novel of the four-year campaign tells both sides of the conflict—through the eyes of the Indian warrior called Badger and the young horse soldier named Ned Justine—and the long, winding trail destined to bring the two face-to-face in one final battle on the Texas frontier.

It also is a portrait of two vastly different cultures that could never coexist.
Read more
Other Formats: Paperback 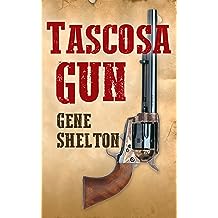 Tascosa Gun: The Story of Jim East Dec 2, 2017
by Gene Shelton
( 22 )
$2.99
Jim East was a working cowboy on the LX Ranch in the Texas Panhandle, just trying to earn an honest living, when his plans took an unexpected turn. While trying to solve a rustling problem for the LX, he was recruited by legendary lawman Pat Garrett to join a posse of tough men to find and arrest outlaw Billy the Kid. When he returned to Tascosa, he was elected sheriff of Oldham County, charged with keeping the peace in the growing community and its population of gunmen, shady gamblers, rustlers, and thieves in a rowdy, hard-drinking town.

But the job got even worse when two factions—the cowboys and owners of small ranches and the powerful cattle barons who ruled the Panhandle—were gearing up for an all-out range war. And Jim was caught in the crossfire of the conflict that threatened to rip his town apart in a bloodbath that would make the Lincoln County range war look like a simple barroom brawl . . .
Read more
Other Formats: Hardcover , Paperback , Mass Market Paperback 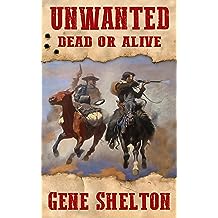 Unwanted: Dead or Alive (Buck and Dobie Book 1) May 18, 2016
by Gene Shelton
( 720 )
$0.00
Framed for cattle rustling and horse theft by the corrupt banker who foreclosed on their employer's ranch, Buck and Dobie find themselves out of work, out of cash, and out of luck. So, they decided to try and live up to their reputation as wanted men—an idea easier said than done.

Buck Hawkins and Dobie Garrett are a pair of cowboys in the Texas Panhandle. They’re unlikely outlaws—until their ranch is stolen and the two cowhands framed for rustling and horse theft by a crooked banker.

Now with a price on their heads and hunted by the law, the two cowboys decide that if they have to ride the outlaw trail, they might as well be the best holdup artists in Texas. Problem is, they aren't all that good at the trade.

Just when they thought it couldn't get worse ...

During a botched stage holdup, they meet Marylou Kowalski, who demands at the point of a derringer that Buck and Dobie kidnap her; she's bored with her life and looking for excitement on the outlaw trail. Marylou convinces the two fugitives that the three of them can score the ultimate in revenge—holding up the crooked banker who posted reward flyers on the two cowboys. 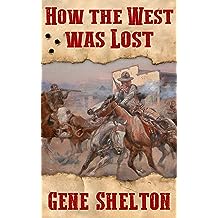 To hear campfire tales and newspaper accounts, you’d think Buck Hawkins and Dobie Garrett were a pair of Old West legends. In truth, the hapless cowpokes would rather run than fight. Guns make them really nervous. But their quiet days punching cattle on the Singletree Ranch are about to come to a dangerous end.

Faced with an offer they can’t refuse, Buck and Dobie hire on as special marshals for a cattle association plagued by rustlers, cow thieves and killings—with a range war just a gunshot away.

The town of Necesario is near the Texas-New Mexico line, a hundred miles from civilization and a foot and a half from hell. Buck and Dobie are probably the two men least qualified to solve the town’s recent spate of murders. Even if they could shoot straight, Buck and Dobie would be headed for big-time trouble …

Gene Shelton's rollicking story of two hard-luck outlaws trying to make it as U.S. Marshals in the baddest border town in the West. This book continues the adventures of Buck Hawkins and Dobie Garrett from Unwanted: Dead or Alive, at https://www.amazon.com/dp/B01FVIEHKO
Read more
Other Formats: Paperback , Mass Market Paperback 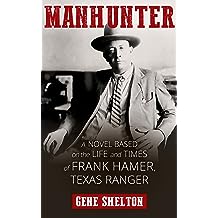 Manhunter: Frank Hamer, Texas Ranger Aug 31, 2017
by Gene Shelton
( 56 )
$4.99
Best known as the Texas lawman who played the major role in bringing down Bonnie Parker and Clyde Barrow on May 23, 1934, Frank Hamer was already a legend before that bloody shootout in Bienville Parish, Louisiana – the final act of a long and courageous career.

There is more to Hamer’s story than the ambush of the two outlaws. His career spanned the times of western law enforcement from horseback and Winchester days to the invention of the telephone and automobile. During that time, he built a reputation as an incorruptible lawman, fearless, a good man with a gun whether on horseback or behind the wheel of a Ford V8, or facing a violent mob. He survived 52 gunfights and 23 bullet wounds.
Read more
Other Formats: Paperback 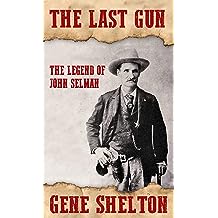 Last Gun: The Legend of John Selman (Texas Legends Book 1) Jun 21, 2020
by Gene Shelton
$4.99
This is a work of fiction based on the life and times of John Henry Selman, one of the Old West’s deadliest but least-known gunmen. Selman lived on both sides of the law—as leader of the vigilant Texas Home Guard and hired gun for the Seven Rivers gang. He was a deadly accurate shooter and left a bloody trail across the West. And in a gunfight that would create a legend, John Selman faced the West's most infamous outlaw, John Wesley Hardin, in one of the most notorious gunfights the Old West has ever known.
Read more 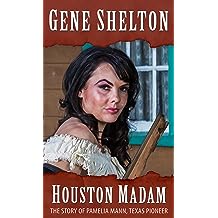 Houston Madam: The Story of Pamelia Mann, Texas Pioneer Feb 29, 2016
by Gene Shelton
( 25 )
$2.99
Pamelia Mann lived in Texas for less than a decade before her death in 1840, but during that time she became known as one of the more colorful characters in the state’s storied history.

She was an expert horsewoman, a deadly shot with rifle or pistol, and for a time owned and operated the most famed hotel and brothel in Houston, then the seat of government for the new republic.

Pamelia is known as the woman who confronted General Sam Houston during the famed “Runaway Scrape,” when the ragged Texas Army and the civilian populace fled the invasion of Mexican forces after the fall of the Alamo. The incident became widely known as “Houston’s Defeat.”

She is also one of the few women ever sentenced to hang in Texas, though she narrowly escaped the gallows. Despite her frequent brushes with the law, Pamelia became one of the bright stars in Houston social circles, much to the dismay of many of the town’s leading ladies. She also built a reputation as a woman of compassion. When a yellow fever and cholera epidemic ravaged the city, she changed her bawdy house into a hospital, and even helped nurse many of the patients.

Pamelia Mann died only six years after she first came to the northern Mexico province that was to become the Republic of Texas. That six years spanned one of the most storied periods in the place that became Texas, in which many of the state’s enduring legends were born. Pamelia Mann earned her place among those legends.
Read more
Other Formats: Paperback 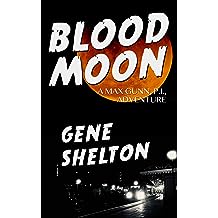 Blood Moon: A Max Gunn, P.I., Adventure Aug 30, 2019
by Gene Shelton
( 2 )
$2.99
Max Gunn, Private Investigator, scratched out a modest living handling divorce cases, missing persons complaints, and tracking down bail jumpers. The last thing he need was big trouble.His rather comfortable life turned complicated when the gorgeous babe in red walked into his ratty second-floor walkup office with a simple problem—she wanted a divorce from her con artist husband.Max didn’t know that chance encounter would drag him into the murky and dangerous world of drug dealers, money laundering, and embezzlement. But he knew he was in serious trouble after he was shot at, beaten up, and his office ransacked.And he didn’t have a clue why …
Read more
Other Formats: Paperback