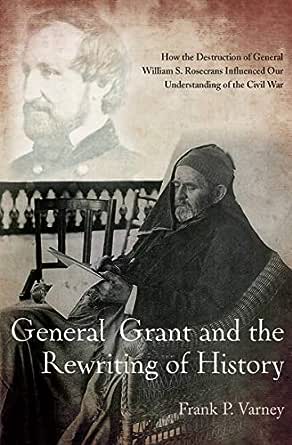 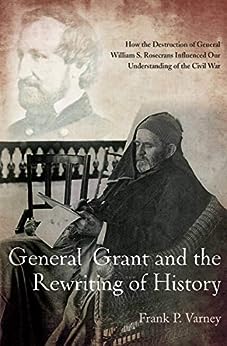 General Grant and the Rewriting of History: How the Destruction of General William S. Rosecrans Influenced Our Understanding of the Civil War Kindle Edition

"This superb book disproves the notion that there’s nothing new to learn about the Civil War. Frank Varney builds a convincing case that William Rosecrans has been treated unfairly by historians and, perhaps more significantly, that Ulysses S. Grant deliberately destroyed his reputation and the reputations of other Civil War generals."
Civil War News

"An invaluable addition to Civil War Studies and reference shelves . . . and a sharp caution against putting too much blind faith in any one person's testimony, memoir, or historical accounting. Highly Recommended."
Midwest Book Review

“I dropped everything and plunged into this book. Every page I read presented challenges to accepted views, including my own. General Grant and the Rewriting of History represents considerable ingenuity and independence of thought.”
John Y. Simon, editor of the Grant Papers --This text refers to the paperback edition.

Frank Varney earned his Ph.D. at Cornell University. He regularly leads student groups to Civil War battlefields and makes frequent speaking appearances before Civil War Roundtables and historical societies. Professor Varney is currently developing a course to be taught on-site at Gettysburg, and will do the same for a course on Chickamauga. He teaches U.S. and classical history at Dickinson State University of North Dakota, where he is also the director of the Theodore Roosevelt Honors Leadership Program. This is his first book. --This text refers to the paperback edition.

3.8 out of 5 stars
3.8 out of 5
32 customer ratings
How does Amazon calculate star ratings?
Amazon calculates a product’s star ratings based on a machine learned model instead of a raw data average. The model takes into account factors including the age of a rating, whether the ratings are from verified purchasers, and factors that establish reviewer trustworthiness.
Top Reviews

Stuart K. Santiago
5.0 out of 5 stars Professor Varney Sets the Record Straight
Reviewed in the United States on December 23, 2018
Verified Purchase
In “General Grant and the Rewriting of History,” Professor Frank P. Varney examines the roles played by General Ulysses S. Grant and others, such as Secretary of War Edwin M. Stanton, his assistant Charles A. Dana, and Rosecrans Chief of Staff, James A. Garfield, in undermining the reputation of an exemplary officer, General William S. Rosecrans.

Rosecrans won the Battles of Iuka and Corinth, though Grant, who was not even involved in the fighting of either engagement, took credit for the victories of both, while criticizing Rosecrans in failing to pursue the enemy, when in fact, Rosecrans did pursue the enemy in each battle before Grant called off the pursuits.

Following another victory at Stones River, Rosecrans accomplished a stunning, near bloodless victory at Tullahoma, yet he was criticized by Halleck, Stanton and historians for taking too long to prepare. In fact, Rosecrans’ careful planning and refusal to be hurried resulted in a successful campaign without any adverse repercussions to the Union war effort being conducted elsewhere.

At Chickamauga, after the Confederate breakthrough, Rosecrans was criticized for panicking on the battlefield, leaving his men to fight while he fled the battlefield, allowing his army to be starved, losing the confidence of his troops, and intending to abandon Chattanooga. All of these criticisms were false and unfairly launched against Rosecrans by Grant, Stanton, and Dana. The criticisms had no basis in fact and were distortions of the truth. Yet many historians accepted them as true without ever doing any independent investigation, such as comparing Grant’s battlefield reports and Memoirs with the Original Records and other primary sources.

Varney readily admits Grant was a great general, but faulted him for manipulating the truth in his Memoirs and reports for the purpose of bringing down and undermining the reputation of Rosecrans, whom Grant did not like. According to Grant, he did not like Rosecrans because he “could not make him do as [he] wished.”

Varney emphasized throughout the book that historians should avoid the temptation of relying on a single source, such as Grant’s Memoirs, which might very well compromise the search for truth. Rather historians should always look at the Original Records (OR) of the War of the Rebellion, the primary sources, and the reports of other witnesses before arriving at a negative opinion or criticism of a great general such as William S. Rosecrans, or any general for that matter.

Throughout the book, Professor Varney never hesitated to place himself at loggerheads with many leading Civil War historians for the sake of advancing the truth and setting the historical record straight. Varney is indeed a frontiersman, and his book a must read!

Dr. Watson
5.0 out of 5 stars Recent and Recommended
Reviewed in the United States on February 13, 2016
Verified Purchase
At last, a fresh look at the much touted Grant "Memoirs." I noticed that several historians who had participated in the 150th Sesquicentennial of the Civil War in Virginia, made much over the validity of Grant's "Memoirs." I beg to differ, especially with Gary Gallagher, who has repeatedly praised the Grant tome as being very reliable. I have always found Dr. Gallagher to be accurate on all other accounts and presentations he has given to his students and at 150th anniversary lectures, but I must take issue on this point, and with anyone who has not have taken the trouble to investigate Grant more thoroughly, as Dr. Varney has. Steven Woodworth and Peter Cozzens are remiss in their books recounting the Battle of Corinth. They have taken artistic license with the facts, and the Grant "Memoirs" version. On the other hand, Varney tells us "chapter and verse" the reason Gran's "Memoirs" are suspect, and there is more "fire than smoke" to his investigation. Indeed, Grant, if the truth had been discovered earlier, would rank permanently in the basement of Presidential rankings. It is now obvious that Grant covered up much that is only now being discovered. He made sure his Army "buds" were taken care of at the expense of others. And keeping in mind his ability as President, to insert his own imprint upon some of the official records, and with some missing, (does not this sound familiar to those familiar with missing documents surrounding, say, the Pearl Harbor attack?), and also his now documented absence from the command HQ at many battles examined in this book; but also his penchant for "falling off the wagon" reference his fondness for whiskey, we must conclude that Grant was not what he is often held up to be, as the 'saviour' of the Union. Let's take the battle at Corinth for example: why did Grant and his staff take all the maps of the area and leave Rosecrans in the dark? Why did Grant take credit for a victory he was not directly involved in? (He was 50 miles away). Yet, he blamed Rosecrans for the incompleteness of followup. How interesting it is to discover that so many modern day historians write Civil War books and continue to quote the Grant "Memoirs" or they quote other previous historians who have quoted the "Memoirs;" which they in turn, have quoted from the "Memoirs." Doesn't sound like original research to me.
Read more
11 people found this helpful
Helpful
Comment Report abuse

Phil Stephens
5.0 out of 5 stars Highly recommended.
Reviewed in the United States on August 14, 2015
Verified Purchase
Meticulously researched and well written, Dr Varney's work is a thought provoking romp through the slippery slope of General Rosecrans' relationship with General Grant. Through unabashed directness, the author carefully builds a clearly defined case against Grant's treatment of Rosecrans and his reconstruction (falsification?) of official war department records. Along the way, he shows how single minded many historians have been vis-a-vis their reliance on Grant as a major source of truth about the Civil War and how that dependence has shaped that conflict's history. Highly recommended.
Read more
9 people found this helpful
Helpful
Comment Report abuse
See all reviews from the United States

Denis Moir
2.0 out of 5 stars Nit-picking
Reviewed in Australia on April 12, 2014
Verified Purchase
I think the author's detailed examination of who said what and who did what and when is futile. People's memories are unreliable, eye-witnesses are unreliable. Inconsistencies in statements over time do not suggest ulterior motives. Rosecrans was replaced because he wasn't aggressive enough, not because Grant didn't like him.
Read more
Helpful
Sending feedback...
Thank you for your feedback.
Sorry, we failed to record your vote. Please try again
Report abuse

Mr. Christopher Harris
2.0 out of 5 stars Cherry-picked history
Reviewed in the United Kingdom on June 4, 2016
Verified Purchase
There's cherry-picking and there's cherry-picking and then there is Frank Varney! Yes he shows lots of primary source evidence for his case but it's the stuff he doesn't show that undermines it. For example read Sheridan's memoirs and yes he says the army regretted Rosecrans' departure but he also says how worried the officers were by the way Rosecrans pursued Bragg splitting his army into small pieces (in contravention of accepted military doctrine) and found himself in a battle he didn't want against a concentrated enemy. This was simple military incompetence. (By the way an army regretting the departure of its general is no sign of ability. The Army of the Potomac loved McClellan and he proved to be useless.)

Rosecrans' advance to Chattanooga that Varney praises so much was execrably slow. Armies manoeuvre to fight they don't (or shouldn't) manoeuvre for the sake of it. Varney also praises Rosecrans for how well he fought at Stones River. He certainly needed to fight well because it was his faulty initial disposition of his army that caused the problems.