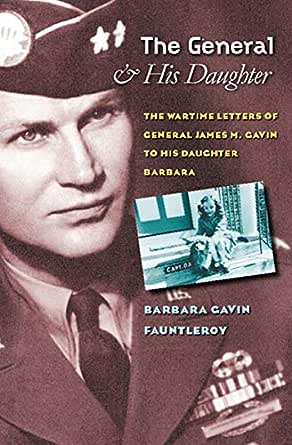 The General & His Daughter: The Wartime Letters of General James M. Gavin to his Daughter Barbara 1st Edition, Kindle Edition 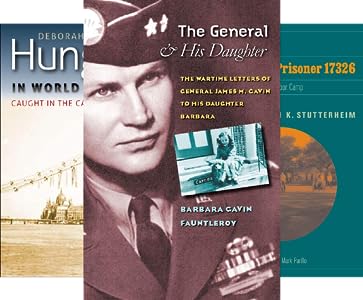 Barbara Gavin Fauntleroy is the mother of three children, Barbara, Steven, and Jim. She lives with her husband in Ridgefield, Connecticut. --This text refers to the hardcover edition.

General Jim Gavin was one of the foremost combat commanders of World War II. He was also the father of a young girl who was only nine years old when he left home, and he worked hard to stay connected to her through these letters. They are touching and highly personal, even as they give us a remarkable view of some of the century's most momentous events. Writing from foxholes and airplanes, muddy tents and castles, he was a teacher, historian, stategist and loving father. In this volume―a gift for historians and general readers―Barbara GAvin Fauntleroy is an articulate and sensitive guide to the personal life of a great warrior who also happened to be her Dad.---―Ed Ruggero, author of Combat Jump: The Young Men Who Led the Assault into Fortress Europe, July 1943; The First Men In; U.S. Paratroopers and the Fight to Save D-Day

“A magnificent book that for the first time
reveals the true character of a man who
has become a legendary figure in Airborne
circles. He set the standard for future Airborne
commanders to follow.”

---―James Megellas, author of All the Way to Berlin

The General and His Daughter: The War-Time Letters of General James Gavin to His Daughter Barbara (Mar., $27.95) by Barbara Gavin Fauntleroy and Starlyn Jorgensen, edited by Gayle Wurst, portrays the 82nd Airborne Division, the first to fight in WWII., ―Publishers Weekly

The General and His Daughter reveals the true personality and provides enormous insight into the incredible courage, integrity and selfless service of Jim Gavin. This personal World War II account of the road from North Africa to Berlin is a fascinating story of a combat leader, whose character and commitment are the standard by which airborne leaders will be measured for generations to come.---―James H. Johnson, Jr., Lieutenant General, US Army, retired

These letters by a legendary World War II warrior general provide an incredible display of devotion, fatherly concern and above all love for his young daughter. Given the multitude of challenges he faced on a daily basis, first as a regimental and then a division commander, deeply involved in some of the most intense combat of World War II, it's amazing that he found time to write them. The letters also provide an insight into a side of Jim Gavin very few people ever saw. Fascinating reading.---―James J. Lindsay, Former Commander 82nd Airborne, XVIII Abn Corps and US Special Operations Command

“Provides a unique insight into the personal life of one of America’s greatest military
commanders. . . . Barbara’s narrative, which contains a great deal of little-known information
about the general’s early life and military career, is fascinating.”

---―Phil Nordyke, author of All American All the Way: The Combat History of the 82nd ABD in World War II --This text refers to the hardcover edition.

Jim Andrews
5.0 out of 5 stars Important History Brought To Life with Compelling Poignancy
Reviewed in the United States on May 6, 2007
Verified Purchase
Barbara Gavin Fauntleroy's book, in which she shares her famous father's poignant and compelling wartime letters to her is a generous gift to all history buffs of the Second World War, and to all surviving paratroopers who knew personally, or knew of, "Slim Jim" Gavin. Memories of my own family's experiences of that War came cascading back to me through memory's haze, and I found myself caught up emotionally as each letter unfolded more of the story. Each letter marked Gen. Gavin's own advance in command and combat experience, each letter marked Barbara's growing maturity from a 10-year-old into adolescence. Despite her young age, he never condescends, never talks down. One is taken by his articulateness as a writer. What a remarkable relationship they must have had. Despite his own awareness of the mortal dangers he faced, he speaks reassuringly and courageously to her, but never once descending into either melodrama, or false bravado. This book is "original source" history, but unlike most examples of that genre, there is no anger here, no settling of scores. One comes away wishing for more, especially as the book ends with Slim Jim leading the 82nd Airborne Division up Fifth Avenue in the 1946 Victory Parade. I felt my own chest puff out with vicarious pride, as hers must have with the real thing. One minor quibble: one would have appreciated the occasional map of the various battle sites in Normandy, Holland and the Bulge. Minor quibble indeed, as this is one of the warmest and most pleasurable reads imaginable; you have not read anything like this. I found myself pausing and putting the book down, to savor the thoughts just read, and to slow down the time when the book would end. I'm very grateful to this author's generosity in sharing what must be her dearest memories and possessions.
Read more
6 people found this helpful
Helpful
Comment Report abuse

Alain Batens
5.0 out of 5 stars GREAT MILITARY LEADER
Reviewed in the United States on August 24, 2019
Verified Purchase
The book clearly exposes General James M. Gavin's personality, his love for his daughter and his overall concern for his men ! I had the honor to meet with this great military leader, in Ste-Mère-Eglise, Normandy, and also had several occasions to talk to his wonderful daughter Barbara ... I will always cherish these "special" encounters.
Read more
One person found this helpful
Helpful
Comment Report abuse

P. J. K. Hendrikx
5.0 out of 5 stars Very interesting insight.
Reviewed in the United States on May 11, 2007
Verified Purchase
I rate it five stars for the readers who want to know more about General Gavin than what is already known and published about him. His daughter Barbara Fauntleroy shares with us the letters he wrote her during the war, and it shows him as a father and human being. In all the other books he is made larger than life (which he was), but here you'll read he has the same worries and interests, and shares the same daily activities as all of us. Also one reads that even during the war he has a sharp sense of what is going on in the world, and it was not some wisdom he aquired after the war when he wrote his memoirs.

It is a great addition to the existing literature about the most publiced division commander of World War 2.

Paul Clifford
5.0 out of 5 stars Straight From the Heart
Reviewed in the United States on June 2, 2007
Verified Purchase
This is an absolutely marvelous book. Barbara Gavin Fauntleroy has given us a very personal glimpse of a Soldier's Soldier who led his men from the front and was truly one of the great Generals of WW II. General Gavin's letters reveal the sensitivity and love that he maintained despite the strains of combat and command. One cannot read this book without feeling that you have shared so much of the personal experience as well as the love and devotion he showed to his daughter. It is a book that lifts the spirit and makes you respect the "Two Star Platoon Leader' even more.
Read more
2 people found this helpful
Helpful
Comment Report abuse

Christopher Saliga
5.0 out of 5 stars Wonderfully Human
Reviewed in the United States on December 18, 2013
Verified Purchase
Some years ago, I enjoyed Mel Gibson's movie "We Were Soldiers" because it involved the impact upon the families of the soldiers. "The General and His Daughter" does the same but with far greater depth and detail than any movie can achieve. Whether writing from North Africa while working up to jumping into Sicily or from France within the context of the Normandy invasion, we see the power of love between a father and daughter and an officer and his men. This is a uniquely thought provoking read.
Read more
One person found this helpful
Helpful
Comment Report abuse

Zahara
5.0 out of 5 stars Insightful book
Reviewed in the United States on August 17, 2014
Verified Purchase
I enjoyed this book. It offers a different look at Gavin other than what is reported historically. It left me with one question. What did she do with all the stuff he sent home to her? What a collection!
Read more
One person found this helpful
Helpful
Comment Report abuse