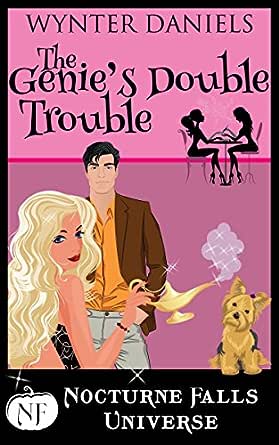 You've subscribed to Nocturne Falls Universe! We will preorder your items within 24 hours of when they become available. When new books are released, we'll charge your default payment method for the lowest price available during the pre-order period.
Update your device or payment method, cancel individual pre-orders or your subscription at
Your Memberships & Subscriptions
There was an error. We were unable to process your subscription due to an error. Please refresh and try again. 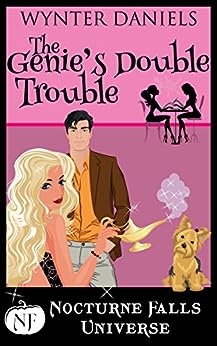 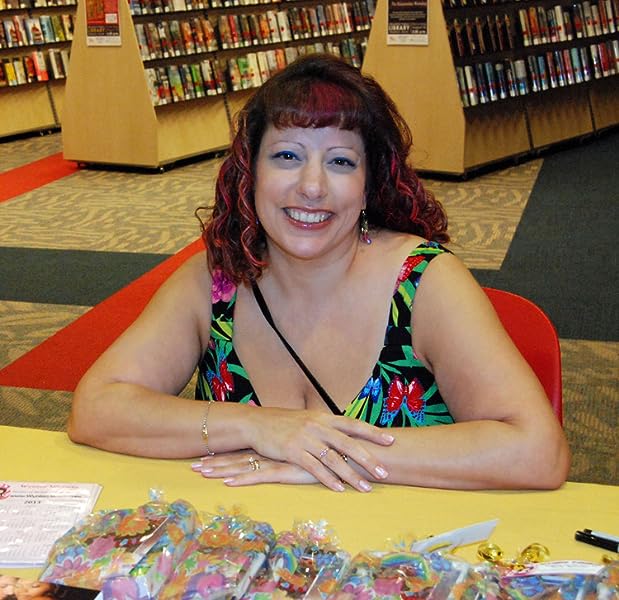 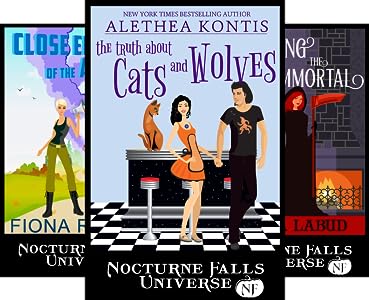 Mallory cleaned hertable, and put away each tool and bottle she'd used. She always felt betterwhen everything was neat and tidy. That done, she checked her appointmentschedule app on her phone. Her next client wasn't due to arrive until noon,which gave her a short break to stretch her legs. After telling thereceptionist that she'd be right back, she walked outside just in time to seethe tourist trolley roll past, right on time. A couple of kids onboard shriekedas the Vampire on Duty bared his fangs at them.

Mallory smiled. Sheloved Nocturne Falls, from the Gargoyle fountain in the middle of the town, to theFriday-night trick-or-treaters, to the Halloween-themed business names. Most ofall, though, she liked her orderly, predictable life there. No surprises toupset her applecart. As she turned the corner into the alley that led to thesalon's back door, she passed Willa--a fae, and the town's most talented jeweler--andwaved to her.

She went in through theback, returning to her table with fifteen minutes to spare before herappointment, so she did a quick three-card tarot spread for herself. Maybe shecould get some insight on the weird dreams she'd had the last two nights. Shewas sure she'd never seen the guy from her dreams before, so why had he visitedher twice while she'd slept?

His emerald eyes wereimpossible to forget. Even now, her heart skipped a beat just thinking aboutthem. His dark hair brushed his shoulders, and when she combed her fingersthrough it, she was surprised at how silky it felt. He was tall--at leastsix-foot-four, with broad shoulders and a narrow waist. And that mouth, theshape of Eros's bow. When he'd drawn her against him for a scorching kiss,she'd actually swooned.

As a child, Wynter Daniels toldher parents she wanted to be an archeologist, an actress or a sculptor.Unfortunately she didn't demonstrate the natural ability to sculpt or to bringan audience to tears with her Ophelia. Nor could she stand getting dirt under herfingernails. But she could always talk her way out of anything by spinningquite a colorful tale.
Wynter has authored more thanthree dozen romances, including contemporary, romantic suspense, and paranormalromance books for several publishers including Entangled Publishing and CarinaPress, and she writes for Kristen Painter's Nocturne Falls Universe. She isalso one of the foursome known as The Jewel Box Authors who write the Jewel BoxAnthology series.
She lives in sunny Florida with her family and aspoiled kitty named Chloe.

Detra Fitch
4.0 out of 5 stars Fast paced tales set in the Nocturne Falls Universe.
Reviewed in the United States on May 28, 2020
Verified Purchase
Jordan Vaughn can communicate telepathically with animals. A Yorkie named Truffle is miserable with his mean owner, Yanira Pfeifer. Truffle helps Jordan win Yanira's contest. Jordan takes the ten thousand dollars (and Truffle) and then immediately leaves town. She goes to her twin, Mallory, in Nocturne Falls. What no one knew was that Yanira's husband, Sheriff Winston Pfeifer, has a genie. Claiming that Jordan cheated on the contest, Yanira convinces Winston to use a wish. The genie, Cyrus, was to find Jordan and bring her back to him.

Mallory's gift with tarot cards informs her that Jordan is in her near future. This is not something to be happy about. Jordan never comes just to visit. She only comes when she is in trouble and brings bedlam with her. This time is no different. Mallory meets Cyrus at work and, of course, bedlam follows.

**** FOUR STARS! This is a fast paced story. It is mostly straight forward, but does have a small twist toward the end. Jordan, Mallory, and Cyrus are the primary characters; however, the main (romantic) focus is on Mal and Cyrus. I love it when an author includes animals within their tales. (Daniels apparently loves animals as mush as I do.) For me, this gives the story a little more warmth. This author has yet to let me down. ****

Barbara Goodwin
5.0 out of 5 stars A Great Getaway
Reviewed in the United States on September 26, 2017
Verified Purchase
I loved Wynter's second journey into Nocturne Falls. It was a sweet and fun story. A great get away for the evening. Mallory Vaughn has gotten her life where she likes it. It's neat, there is no chaos, she does her manicurist job and her psychic readings and she likes it that way. Though she is having these awesome dreams with this amazing dream man with the most gorgeous emerald eyes. Yet her life is about to get into a mess again when her trouble making sister, Jordan comes to Nocturne Falls. What is also alarming is she meets her dream man in the flesh! What she doesn't know is Cyrus (don't you just love that name) is a Genie, who has been sent by his master to bring Jordan back. Yet, when he meets Mallory, his attraction is undeniable. How can he fulfill his master's demands and not hurt her along the way. I highly recommend a trip to Nocturne Falls with Wynter Daniels, with The Genie's Double Trouble and her previous book The Fortuneteller's Folly.
Read more
One person found this helpful
Helpful
Comment Report abuse

Betty Olsen
5.0 out of 5 stars Sexy and funny!
Reviewed in the United States on September 26, 2017
Verified Purchase
What happens when a Genie, Cyrus Barkes, is sent on a mission to find someone and bring that person back to his master. A lot of complications for everyone especially since there are twins involved!! I loved this book from start to finish-couldn't put it down until I finished it. Has a unique storyline, a quick read, sexy & funny characters, intrigue and an unexpected twist. Also has an HEA!
I highly recommend this book
Read more
4 people found this helpful
Helpful
Comment Report abuse

Grace Outta Book Room
1.0 out of 5 stars What the heck?
Reviewed in the United States on October 22, 2018
Verified Purchase
Is this author unfamiliar with Kristen Painter’s genie mythos? Or did she just purposely disregard the actual cannon details about genies and the Chaos Realm? Either way, I am beyond frustrated by this story. I loved “The Reaper Rescues the Genie” by Kristen Painter and I was hoping to revisit the genie mythology she created, but this story disappointed me completely.
Read more
One person found this helpful
Helpful
Comment Report abuse

Auntie
5.0 out of 5 stars A funny and sweet romantic story
Reviewed in the United States on October 4, 2017
Verified Purchase
A very cute story. I love Nocturne Falls Universe. Nocturne Falls is a cool town with Halloween 365 days a year so the vampires, witches, Gargoyles, etc can live amongst humans without them knowing. This novella was about a Genie and it was a sweet romance. Loved the characters and couldn't put the book down. A fun read!
Read more
Helpful
Comment Report abuse

Kindle Customer
4.0 out of 5 stars Loved story
Reviewed in the United States on October 20, 2020
Verified Purchase
End was abrupt, like ok got the correct number of words in let's finish it. A little more there would have gotten that fourth star
Read more
Helpful
Comment Report abuse

pilar seacord
4.0 out of 5 stars I enjoyed this story
Reviewed in the United States on October 19, 2017
Verified Purchase
Cyrus Barker is a genie a sheriff and his evil wife. Jordan did something using her ability to communicate with animals using the wife pet for the info.She leaves town and Cyrus follows her to Nocturne Falls where her twin sister Mallory lives, Cyrus falls for Mallory and the feeling is mutual. I enjoyed this story.
Read more
Helpful
Comment Report abuse

Kindle Customer
5.0 out of 5 stars Loved it!!!
Reviewed in the United States on February 28, 2018
Verified Purchase
Another wonderful read in the Nocturne Falls Universe. Wonderful tale of a physic nail tech and her trouble causing twin who comes to town after being chased by a genie who is sent to find her by is Master. I love every book in the NFU and Wynter Daniels is a delightful addition!
Read more
Helpful
Comment Report abuse
See all reviews

lisa w
5.0 out of 5 stars Great read
Reviewed in the United Kingdom on December 10, 2019
Verified Purchase
As good as any Nocture Falls book. I was 75% through before I knew it !
Highly recommend both the author and this book
Read more
Report abuse

Angie Hackett (Stormageddon)
5.0 out of 5 stars Light easy read
Reviewed in the United Kingdom on December 17, 2017
Verified Purchase
This was a light and easy read. Nocturne Falls as ever is the perfect setting in this book. The characters and plot were interesting.

marie
2.0 out of 5 stars Disappointing
Reviewed in Australia on September 27, 2018
Verified Purchase
Love the main Nocturne Falls books by Kristin, Sadly not even able to finish reading this story.......
Read more
Report abuse
See all reviews