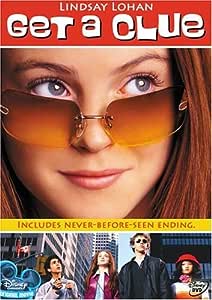 Share
STREAM ANYTIME with Prime Video from $5.99
Have one to sell?
Sell on Amazon

Teen sensation Lindsay Lohan stars as Lexy Gold, budding journalist and fashion queen of Millington Preparatory School in Manhattan. Together with her best pal Jennifer (Brenda Song), Lexy's always on the lookout for the latest scoop and the latest style. When one of her teachers mysteriously disappears, Lexy goes from school advice columnist to determined investigative reporter. And with a little help from her friends Jennifer and Gabe, and her street-smart editor Jack, Lexy vows to get to the bottom of the mystery. Before they know it, they find themselves hot on the trail of a story bigger than they could have ever imagined!

4.6 out of 5 stars
4.6 out of 5
207 global ratings
How are ratings calculated?
To calculate the overall star rating and percentage breakdown by star, we don’t use a simple average. Instead, our system considers things like how recent a review is and if the reviewer bought the item on Amazon. It also analyzes reviews to verify trustworthiness.
Top reviews

Laura
4.0 out of 5 stars Teen Queen / detective for the Younger Crowd!
Reviewed in the United States on April 18, 2008
Verified Purchase
Lindsay Lohan is a very good actress. Not many think of her in that light. We tend to see her as another teen trouble maker in/out of rehab. She truly knows her craft & I respect her for that.

I live in the middle of many movie studios (Cali) so my cable has a ridiculous number of channels. We have 3 PBS channels. The nice part is that I get to see movies quicker than others.

This movie was light and cute but definitely geared towards a young crowd. I would buy this movie if I had kids from 10 - 13. Maybe even a bit younger. Since it's a detective movie preteens would be able to keep up with the clues.

I've seen all her movies. My favorite hands down is "Georgia Rule".  Georgia Rule (Widescreen Edition)

Directed by Garry Marshall you can never go wrong. He knows his stuff. Georgia Rule was a stretch for him in that it spans 3 generations of women with ALL the emotional triggers and real life situations.

Others Fav's by Garry Marshall:

Kindle Customer
2.0 out of 5 stars It's an ok movie
Reviewed in the United States on July 22, 2020
Verified Purchase
It's sort of boring. A lot of the things that happen have no actual meaning in the movie. A lot of things don't get explained. Lindzy Lohan has started in better movies.
Read more
Helpful
Report abuse

Amanda Weir
5.0 out of 5 stars Love it
Reviewed in the United States on April 12, 2020
Verified Purchase
Love it
Read more
Helpful
Report abuse

Susan Benson
5.0 out of 5 stars Great early Lindsay.
Reviewed in the United States on December 29, 2014
Verified Purchase
If only the Lindsay Lohans of the world would stay as innocent as they were in this movie. Good story line. Good pacing and an alternate ending worth watching. Lindsay and her entourage learn a lot about themselves and others in this crazy adventure.

If you're a fan of the early Lindsay, watch it.
Read more
One person found this helpful
Helpful
Report abuse
See all reviews

Throda tzen
4.0 out of 5 stars “Just three words, fab-u-lous.” [Jen]
Reviewed in the United Kingdom on November 3, 2015
Verified Purchase
This 2002 light humoured drama mystery stars Lindsay Lohan as privileged fashion buff Lexy Gold, who competes for status on the school newspaper with ordinary Jack Downey (Bug Hall), the editor. When a photograph she has taken of her teacher is published in the city's daily paper, he goes missing and his car is found in the River so Lexy and 3 friends decide to investigate. But are they ready for the truth?
The characters are cartoon stereotypes, a mix of ‘Clueless’, ‘Mean Girls’, ‘Legally Blonde’ all trying to be a Scooby Doo low budget version of Spy kids. The script is very much aimed at pre or young teens but there is little here for those much older.
The single disc loads to language selection [5 main European languages] then goes direct to trailers before reaching main menu of play, scene selection, set up [languages/subtitles] and bonus features [an alternate ending]. Rated universal it has all the hallmarks of a Disney movie –people are just so understanding. The youngsters will love it, just leave them to it and they’ll be entranced. A worthy **** but not for adults.
Read more
One person found this helpful
Report abuse

sharon
5.0 out of 5 stars Very fast delivery
Reviewed in the United Kingdom on March 10, 2020
Verified Purchase
Great film, a must for any lindsay lohan fan, shipping was very fast 😁
Read more
Report abuse
See all reviews